In welcoming guests, Joseph M. McShane, S.J., president of Fordham, listed some of the many joys of the season: greenery, greetings, angels, singing—and tourists.

“I know, I know, they don’t know where they’re going, they clog the sidewalks, they walk too slow, and they stop you when you’re at a sprint to catch a train, to ask for directions,” he said. “But I love tourists. You may say, why? … Why did God create tourists? The answer is a simple and very important one: Someone had to pay full price.”

More seriously, he noted that we should all appreciate tourists because “they see a New York Christmas with new and open eyes.”

New York does Christmas like no place else, Father McShane said. But it’s not just the city’s traditions that we celebrate at the start of the season, he said, it’s our personal holiday rituals as well.

He talked about his own family’s “great McShane Christmas custom,” in which he and his three brothers piled into their 1948 Pontiac when his father drove their uncle home to midtown Manhattan. 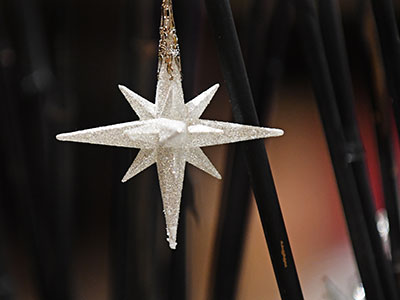 On the way back to their home in Marble Hill, they would drive by what his father thought was “the greatest hidden Christmas treasure in the city of New York,” the Star of Bethlehem that sat atop the tallest building of the Fordham Hill apartment complex.

“It just presided over the whole city in a very special way,” he said. “It is as steady as love itself.”

Father McShane let all guests know that they would be receiving an ornament shaped like a Moravian star—a representation of the Star of Bethlehem.

Part of Fordham’s mission, he said, is to be a “source of light in darkness.” He told guests that he hopes when they look at the ornament, they will be reminded of their own responsibility and mission: