“We are so delighted to have a new president with such deep and interesting connections within the U.K. and a commitment to continue to develop Fordham’s international impact,” said Fordham London’s senior director, Vanessa Beever, LAW ’94, a University alumna herself. “It’s fantastic to have a fellow female lawyer, mother, and dog owner as our president.” 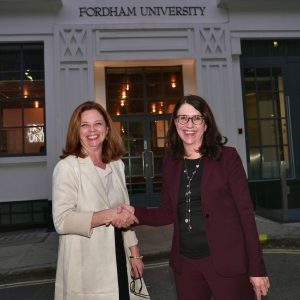 President Tetlow and Vanessa Beever, senior director of Fordham London, at the main entrance to the London campus

Fordham London opened in 2018. After nearly a decade of borrowing a building from another institution in London, the University signed a long-term lease for a space in the center of the city that it could call its own. The 17,000-square-foot facility has six floors that comprise a lounge, small library, classrooms, and a rooftop terrace that overlooks the trendy Clerkenwell neighborhood. Students from New York can swipe into the London campus with their original ID card. Inside the building, they take business and liberal arts courses that have taken them across the city—to British art museums, theaters, and even fashion shows.

At a presidential alumni reception that also included current students and several Fordham board members and administrators, Tetlow said she’s been hard at work building on the many advantages Fordham offers its students—both in New York and in London.

“In this work of leading Fordham, I get to build on incredible strengths, on our location in the other capital of the world, in New York, and on the chance we have—with our amazing strengths in the humanities, in law, in business, and so much of what we do—to matter to the world, to model for our students what that looks like, to give them opportunities that come from being in New York and also in London,” she said. “To show them the kinds of jobs they can get, the kind of impact they can have on the world, and how they can stretch their imagination about what that looks like.” 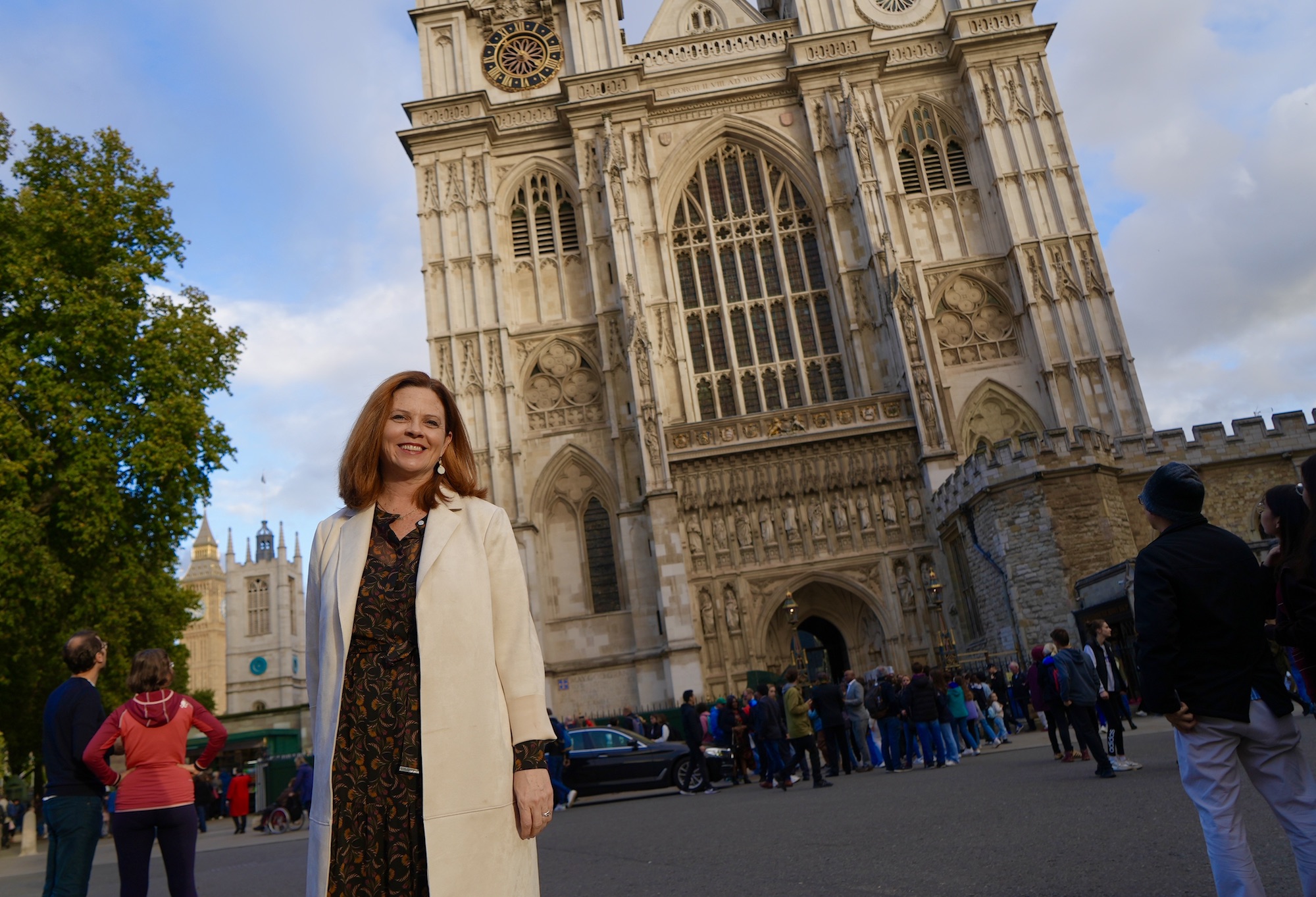 Tetlow herself is no stranger to London and the United Kingdom. She is a longtime member of the British-American Project, an organization that promotes cross-cultural understanding among young leaders. Through this group, she made many friends in London and met her husband, Gordon Stewart, who is originally from the United Kingdom. She has a daughter, Lucy, who has American/British dual citizenship; a stepson, Noah, who lives in Scotland; and a home in Fife, Scotland, with Stewart.

When she first began visiting the United Kingdom, she was surprised by the similarities and nuanced differences between American and British culture, she said. Now, the country—and Fordham’s London campus—feel like home.

“I am proudly bilingual. I drink a cuppa. I take out the rubbish. I feel chuffed from all this praise,” she said at the presidential alumni reception. “And I can, if I’ve had a couple of pints, even understand Geordie. That’s how local I feel.”

Connecting with the Catholic Church Abroad 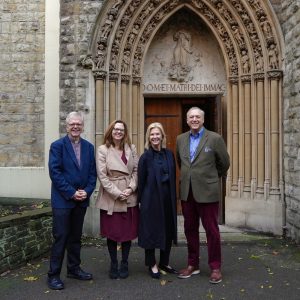 Tetlow’s first trip to London as president of Fordham began with a visit to Westminster Abbey, a historic church that has witnessed coronations and burials for generations of British rulers. As the sun set below the London skyline, Tetlow sat in the same space where recently deceased monarch Queen Elizabeth II had once walked, and observed an evensong performance with colleagues from New York.

On Oct. 25, her first full day in London, she attended a morning Mass at Farm Street Church, which has served as the Jesuits’ flagship church in London for nearly two centuries. She was introduced to Michael Holman, S.J., a prior Jesuit provincial of the United Kingdom, who gave her a tour of the sacred space and taught her about the history of London’s Jesuits. (Father Holman has a connection to Fordham, too. In 1989, he earned his master’s in education and administration from the Graduate School of Education and lived at the Rose Hill campus with the Jesuits for several years.) 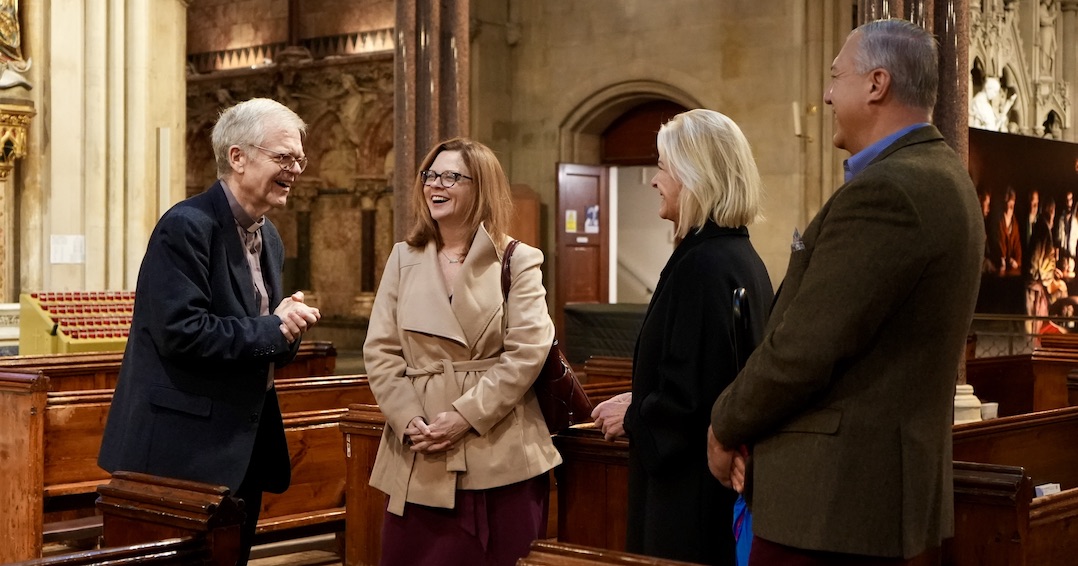 In the afternoon, Tetlow visited Fordham’s London campus for the first time. Following in the footsteps of her predecessor, Joseph M. McShane, S.J., who last visited Fordham London in 2021, she toured the facilities and met its staff.

Seated at a table with staff, Tetlow inquired about Fordham London. What are the academic programs and curriculum like? Where do the students live? And what are the students themselves like?

Every year, there are about 500 students at Fordham London, she learned, most of whom are upperclassmen from the Gabelli of Business and liberal arts students. The majority are Americans from Fordham’s New York campuses, and they tend to come to Fordham London for a single semester. Students from other American universities studying abroad can also study at Fordham London. Through connections with study abroad housing partners, students are able to live in local apartments that offer a glimpse of post-graduate living. They commute to campus by taking the Tube, riding a red double-decker bus, or simply using their own two feet.

Through partnerships with local universities, students are able to take one or two courses outside the campus, at the City University of London and other schools. But the bulk of their education takes place at Fordham. Through their faculty and coursework, liberal arts students have been able to perform in the iconic Tower of London and view versions of Shakespeare’s plays that appeal to a modern audience. Through school-sponsored trips, students from all disciplines travel across the United Kingdom to famous sites like Stonehenge. (They also use their free time to explore the whole European continent, including Paris, which is no more than three hours away by train.) And just outside the Fordham London campus is Leather Lane, a bustling food market that stretches across several streets and boasts a wide selection of cuisines, from Persian kebabs to Japanese hibachi to Yorkshire burritos—pudding wraps with sage stuffing, spinach, roast potatoes, and gravy.

Armando Nuñez Jr., chair-elect of Fordham’s Board of Trustees, attended the meeting with Tetlow and Fordham London staff.

“It’s so wonderful to be here in person with our new president and to be engaged in this conversation,” said Nuñez. “The University has a great opportunity here to expand its global footprint in a smart and strategic way.”

After the meeting, Tetlow hosted a reception for the British-American Project at Fordham London. The next day, she welcomed more than 100 members of the Fordham family at the presidential alumni reception held in the Shard, the tallest building in Western Europe. And in private meetings paired with food and wine throughout her trip, she became acquainted with alumni who now call London home.

William J. Loschert, GABELLI ’61, is a trustee fellow who grew up in Queens, New York, and now lives in London.

“Fordham London is a great hub for students,” Loschert said. “London has a lot more traditional history than New York. We also have a different form of government, which right now is kind of a mess with three prime ministers in two months, but it’s a different culture, and I think it’s good that students can get out of New York and America and see how the rest of the world lives.”

On Thursday—Tetlow’s final day in London—she met with the Fordham London Advisory Board and other senior members of the University’s administration to brainstorm ways to improve the study abroad experience for students; she also met Fordham London’s new head of experiential learning. At an evening reception held on campus, she was introduced to Archbishop Claudio Gugerotti, the apostolic nuncio to Great Britain.

A Luncheon with the ‘Future Generation of Fordham Leaders’

Finally, she ate lunch with visiting Gabelli School of Business students in Fordham London’s ground floor lounge. The students, who study in the Professional MBA Program, had flown to London as part of their course called The Tale of Two (Global) Cities. For one week, they studied the differences between American and British businesses through lectures, walking tours, and site visits at places like Goldman Sachs, Mercer, and TrueLayer.

In attendance at the luncheon was Andrea Mennillo, Ph.D., chair of Fordham London’s Advisory Board, who thanked the business students for coming to the London campus. 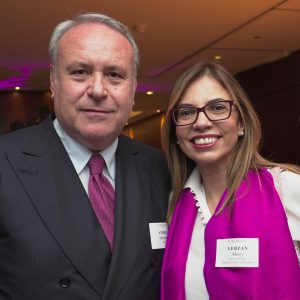 Andrea Mennillo, chair of the Fordham London Advisory Board, and Lerzan Aksoy, interim dean of the Gabelli School of Business, at the London presidential alumni reception

“At this table are my fellow members of the board,” he said, gesturing to his colleagues in the room. “We are available to help—to advise, to consult—because you are the future generation of Fordham leaders.”

The students introduced themselves to Tetlow and the senior members of Fordham’s administration. Most of the students are in their final year in the MBA program and already hold jobs at prestigious companies, including Warner Bros, Forbes, The Wall Street Journal, and JPMorgan Chase. They work in a variety of industries, including advertising, fashion, law, cybersecurity, health care, media, investment relations, and private equity.

Tetlow told the students she was glad their business education at Fordham could include this international perspective.

“This is an amazing city, and I bet a lot of you have gotten a taste of it and want to come back,” Tetlow said to the students. “So I’m glad, especially to those of you who are here just for a week, that you’re digging in, really listening hard, asking good questions, and learning in ways that will change your thinking forever.”