For that, she said, one need only harken back to the efforts of the faculty, staff, and administrators of the past. It’s a notion she has seen both in New Orleans, where she served as president of Loyola University before coming to Fordham and in the Bronx.

“When I was a child, my dad used to stop us every time we walked past a live oak, one of those massive, majestical trees draped in moss, and tell me, ‘The person who planted that tree did it for their grandchildren, not for themselves.’” We passed a lot of oak trees in New Orleans, so I heard this story a lot,” she said.

“But he was right, and so it is for us. The people who planted the elm trees on our Rose Hill campus did it knowing they wouldn’t be beautiful for generations to come. But they did it anyway. The success and resources we have today at Fordham came from people just like us, who carefully set aside money at the end of every year to grow in the endowment or to invest in new programs, new research, new ideas.”

Our job now, she said, is to plant new seeds, “play the long game,” and be creative.

“At this moment in higher ed, the riskiest bet available is to double down on inertia and short-term thinking,” she noted.

Fordham is already in an excellent position to advocate for change she said, as an institution that fights against hate and racial injustice and promotes values such as human dignity, welcoming the stranger, and understanding that we are all equally loved by God.

“At a time when the richest 10% of Americans own almost 90% of the wealth, we fight against the ways the game is rigged. We refuse to squander this country’s talent,” she said.

Fordham brings the promise of elite academic excellence to students from everywhere—from both poverty and privilege, and from every creed and color. “Twenty percent of our students are the first in their family to go to college, carrying the hopes and dreams of generations on their shoulders. Almost half of our undergraduates are students of color.” 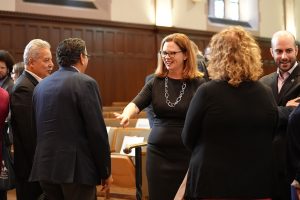 President Tetlow greeted members of the Fordham community after delivering her address.

She also noted that as a Jesuit institution, constant improvement is a trait that “is written into our DNA.” The motto “change nothing, improve everything” is particularly relevant to the moment, she said, noting that members of the Society of Jesus actually have a name for the concept: “indifference.”

“It’s an odd name because it also means the opposite of indifference. It means we decide what matters most—our guiding principles, our mission, our purpose —and to those, we cling fiercely. But we let go of our attachment to everything else,” she said.

Tetlow noted that she was still in the process of introducing herself to the community and learning about the inner workings of the University. When it comes to specific plans for the future, she prefaced her remarks by saying she’s inspired by her Uncle Joe, a 91-year-old Jesuit who is her “personal Obi-Wan Kenobi.” During the pandemic when she agonized about decisions related to COVID, she said, he kept telling her that “the answer to the crisis can be found inside the crisis.”

“It got annoying because I knew I was supposed to know what it meant, and I didn’t. But then it dawned on me. This is one of those great insights of Jesuit discernment. Instead of trying to project the answer to the crisis from the outside—to use the premade solution—we find the answers by digging into the particulars of how the problem presents itself here, with us, at this moment,” she said.

“I imagine that some of you will be eager for me to present a fixed vision of the strategy ahead, but right now, I am in deep discernment mode. I am trying very hard to avoid jumping to conclusions, or thinking I have the answers too quickly.” 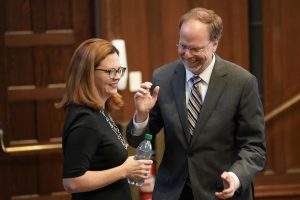 Tetlow promised she’d circle back in a month or so to share the insights she’s learned. In the meantime, she said, it’s worth reflecting on why change is necessary.

“Now that we all have the curse of living in interesting times, we’ve learned that no one puts up a sign saying, ‘Heroes, turn this way,’ or ‘Major moral choice on the horizon.’ Instead, those opportunities come in thousands of daily decisions. Little things that add up to big things,” she said.

The good news, she said, is that doing the right thing, and having an impact, will make Fordham stand out in a crowded market. And the current generation is on board.

“They want to challenge authority, transform systems, question orthodoxy. They demand that we move beyond our own narrow self-interest,” she said.

“There is nothing more Jesuit than that.”

The beauty and magic of being part of a university is it gives one the opportunity to be a force multiplier, she said. So when we feel tired and cynical ourselves, it’s important to remember that we have the privilege of teaching thousands of students who still have hope and idealism.

“Our students need the skills to make a difference in the world, but not just that. They also need the emotional intelligence to actually make a difference. They need to understand that liking a protest video on TikTok or indulging in displaced anger, does not count as effective activism. We at Fordham can model for our students how to not just tear down, but to build. To solve. To inspire.”

Watch the full address below: