skip to main content
Return to Fordham University
You are at:Home»Inside Fordham»Physics Professor Wins Award for “Contributions to Science”

Fordham University professor Quamrul Haider, Ph.D., has been selected for the 2012 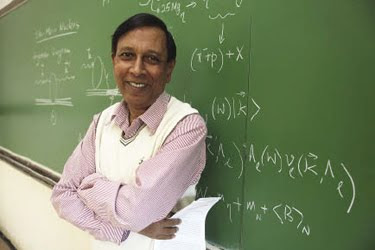 Independence Award in the category of “Contributions to Science by an Expatriate.”

This is the highest civilian award given by the Bangladeshi government to ten citizens/expatriates every year on the eve of the Bangladeshi Independence Day (March 26) for contributions to different areas and disciplines.

Most of them are given posthumously.

The award is being presented to Haider for confirming the existence of new nuclear matter, which he collaborated on with Dr. Lon-chang Liu, staff physicist at Los Alamos National Laboratory. The eta-mesic nucleus, an eta meson trapped inside a nucleus, is 100,000 times smaller than previously discovered mesic atoms. Haider and Liu had first predicted this in 1986.

Haider, professor and chair of the Department of Physics, said he could not believe it.

“I have been living in the United States since 1975. It seems like there must have been a magical hand behind my nomination,” he said.

The ceremony will take place Osmani Memorial Auditorium in Dhaka on March 25. Prime Minister Sheikh Hasina will give the awards.