skip to main content
Return to Fordham University
You are at:Home»University News»Pandemic Lessons Learned and Applied at Syllabus Retreat
As part of the retreat, professors met each afternoon at the new LITE Center, which provided resources for them to develop their syllabi. (Photos by Tom Stoelker)
At Fordham’s summer syllabus institute held from May 23 through May 26, more than 30 faculty met at the Rose Hill campus to examine how developing pedagogies and technologies could be applied to one syllabus that each professor was in the midst of developing for the upcoming semester.

Anne Fernald, Ph.D., professor of English and special adviser to the provost for faculty development, said one of her hopes for the retreat was to provide participants with inspiration and time to reflect on lessons of equity and inclusion gleaned during the pandemic and how technology and pedagogy can be used to advance those goals.

“Much of what we learned about racial justice and teaching online in the past two years was learned in crisis,” she said. “This retreat was designed to give us the chance to deepen those lessons while getting to know colleagues—both other teachers and some of the many support staff here at Fordham.”

Professors gathered in the mornings to workshop key concepts into their syllabi, including racial justice and anti-racism work. For example, Grace Shen, Ph.D., associate professor of history, led a worksop on “decolonizing the syllabus.” She discussed a class that was developed with funds from a Teaching Race Across the Curriculum grant, which supports ways that professors can integrate questions of race into their curricula. Shen, an expert in late imperial and modern China, showed how she incorporated those questions into her syllabus for the class.

“This way, everyone in the room heard from one colleague in a lot of detail of how she did it, so they can go back to their department and say ‘I have notes on how history did it, and here’s where I think history’s experience matters to our discipline,” said Fernald.

“In many cases, this is where the discussion starts,” Fernald said of the morning sessions.

Staff from IT and Fordham Libraries were on hand to help assist at the LITE Center.

Steve D’Agustino, Ph.D., director of online learning, teamed with Fernald during the pandemic to reconceptualize teaching when everyone in the community was separated. Those lessons and benefits from online instruction have now carried over to in-person teaching. For example, he noted that the pandemic showed that students with disabilities who might not be able to attend class in person could fully participate online.

“There are people who are initially drawn to online learning as a form of assistive technology,” said D’Agustino,

A truly inclusive classroom would ensure that their unique perspective would contribute to the course, as well as provide much-needed access to learning, he said.

“During the pandemic, we all learned so much about teaching in mediated ways, teaching at a distance, perhaps even flipping my classroom,” he said, going on to explain the flipped classroom concept:

“In a traditional classroom, students do classwork in class and homework at home. In a flipped classroom, I may create learning activities for the students that they interact with at home, like a recorded lecture, and then in class they solve problems together.” 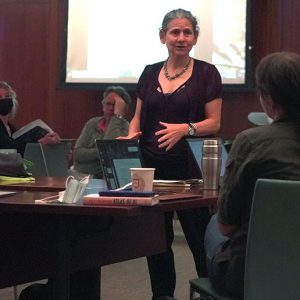 Bolgatz discouraged starting large group work right away. She noted that most students come into the classroom competitive, so before starting out with larger groups, she advised keeping it simple by setting students up in pairs, then threes, and later fours.

“They got themselves into Fordham for goodness sake. They’re used to being competitive, so you’re going to have to cultivate their cooperative muscles,” she said.

For that reason, Bolgatz also expressed concern about the debate format, where students argue a particular point of view, rather than working together to understand why a particular group holds a particular view. She cited an earlier refection by Christie-Belle Garcia, Ph.D., former assistant dean for student support and success, which discouraged pitting students against each other via competitive situations.

“If we are caring for our students and we are putting them in a win-lose situation instead of a win-win situation, then we’re going to have people losing,” she recalls Garcia saying. “And sometimes that’s fine. That’s true in life. But I just would temper that with our cooperative time, where we’re all going to be better at this task because we’re all getting better together,” she said.

Bolgatz also talked about aspects of exclusivity inherent in debate that professors need to be cognizant of.

“Think about what a debate may be for a learner for whom English is not their first language. They’re just as smart as everybody else, but they just can’t think about the answer as fast if they’re still understanding the question,” she said.

Questioning for the Advanced Learners

Jon Craven, Ph.D., associate professor of education, said he develops a syllabus by asking students what they want to learn and what questions they want to be answered. It’s a method he reserves for graduate students.

“We know how adults learn and if they don’t have a stake in the purpose for learning, they will go through the hoops of completing the components of the syllabus without learning much,” he said. “The construct you hold in your head on what teaching is—and who you are teaching— impacts what you do in the classroom.”

Each day of the retreat closed with the professors convening in the Walsh Family Library’s new LITE Center. For that week, the modular spaces at LITE, which stands for Learning & Innovative Technology Environment, acted as a one-stop-shop for the duration of the retreat and provided professors with resources to work on their new syllabi, including consultants from IT, the Center for Community Engaged Learning, Blackboard, Educational Technology and Digital Scholarship, Fordham Libraries, and Student Support.

“I can come here and talk to someone from IT, get access to a 3D scanner, or make a podcast. Here, I can sit with an expert. And the leadership here seem very committed to making this as much a one-stop-shop for faculty as possible,” said D’Agustino. “The truth is we’re in a process of hybridization; no one is just in the digital space anymore, and no one is just in the physical space.”