skip to main content
Return to Fordham University
You are at:Home»Inside Fordham»Pace Takes on Cybersecurity 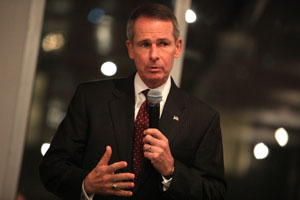 General Peter Pace (Ret.), former chairman of the Joint Chiefs of Staff, recalled the early days of the Internet when he rarely saw news articles that dealt with cyber security. Today, he said, he sees them every week.

Pace gave a talk on Nov. 13, sponsored by the Fordham Wall Street Council, onCyberterrorism and Implications for Financial Markets and Platforms.

Sharing sensitive information is a tricky business, said Pace, and the challenge for the federal government is to maintain national security secrets while assisting the business community that’s under constant attack.

Nation-states are the only entities that have the ability to launch a crippling attack on another nation. But that will change, said Pace—and it’s not a question of if, but when.

“Whether it’s nation-state sponsored, or terrorists, or criminals, or hackers, we have got a huge problem,” said Pace. “And part of the problem is we have not been able to talk about it.”

The general said that people on the Federal level who understand our cyber attack capabilities are reluctant to communicate with those on the defense side.

“Our system is set up, so that only the people who absolutely have to know, know the most important secrets of our country,” said Pace. “But all the things that protect the secrets, make it more difficult to help the defenders.”

He added that if dealing with that dichotomy is difficult within the government, it gets more complicated when sharing information with the private sector. Though by his own rough estimates, he said that the cyber threat is about 20 percent for the government and about 80 percent for business.

“We need to get those folks together and sit down and [talk about]how they would be attacked,” said Pace. “And now, understanding the vulnerabilities, how might we work together?”

Pace’s position at GBA stands as just one example of the cybersecurity relationships that have been forged by the University with a cross-section of leaders from government, industry, and the academy.  The University has taken a leading role in cyber security issues since 2009, when it launched its first International Conference on Cyber Security (ICCS), co-sponsored with the Federal Bureau of Investigation.

Another ICCS conference is scheduled to take place at Fordham in August 2013.