skip to main content
Return to Fordham University
You are at:Home»Editor's Picks»Our Most Viewed Stories of the Year

Each year Fordham faculty, students, alumni, and friends make significant achievements that bring attention to the University and its mission of educating men and women for others. The Fordham stories that were viewed most often this year were no exception. Whether the subject was a Hollywood movie of espionage and intrigue, a Jesuit dedicated to bringing laughs to his students, or an alumnus inventing his life’s gift to humanity, the stories below touched our readers’ hearts and minds, inspiring “shares” and “likes” far beyond the University community. Thanks to all who visited Fordham News this year. 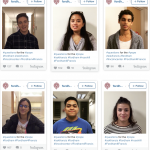 10. Pope Francis: Video Messages from the Fordham Community (By News and Marketing Staff)

In recognition of Pope Francis’ historic visit to New York City, Fordham created videos of welcome, and members of its faculty and Jesuit community offered extensive commentary in the media about the visit. Pope Francis’ addresses to the U.S. Congress and to the United Nations were streamed live on campus, Fordham staff covered his public events, and students offered their questions for the pope via Fordham Instagrams. 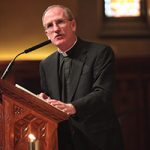 In a strongly worded statement, Father McShane made clear that those in the University community who commit acts of racism, sexism, homophobia, or bigotry “will face the appropriate disciplinary proceedings, in addition to whatever criminal charges are brought, when appropriate.” Father McShane’s comments were in response to two incidents in which students reported being subjected to mistreatment or the use of racist language. 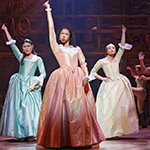 Vanessa Nadal, LAW ’10, the wife of Hamilton playwright and actor Lin-Manuel Miranda, gave a group of lucky theatergoers an insider’s view of the Broadway hit show, as part of the Fordham Alumni Culture and Entertainment (FACE) series. Nadal said she encouraged her husband to make sure that a female lead character got a rap of her own in the smash hip-hop musical. “Lin is attuned to the female roles, but I did push him a little bit,” she said. 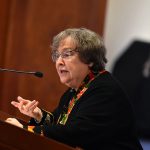 7. Truth about Mary Magdalene Could Open Doors to Women in Church (By Joanna Mercuri)

In a lecture, Elizabeth Johnson, CSJ, Distinguished Professor of Theology, said that Mary Magdalene’s important apostolic acts have been overshadowed by Pope Gregory’s mistaken characterization of her, in 591 a.d., as a repentant prostitute. Mary of Magdala, likely a well-off independent woman, was one of Jesus’ most influential apostles, whose true story can reclaim the role of women in the church, said Sister Johnson. Today, theologians are returning to scripture to uncover more evidence of women’s contributions to Christianity. 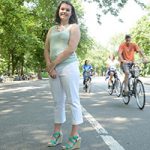 Lacrosse player Corinne Logan, a junior in the Gabelli School of Business, found that using an insulin pump to manage her Type 1 diabetes offered her lots of freedom to move, but that it was bulky. The athlete-entrepreneur founded Pumpstash, LLC, a company which creates spandex shorts for active diabetics who use an insulin pump and a glucose monitor. Ten percent of the profits from the sale of of each pair go to support the Juvenile Diabetes Research Foundation. 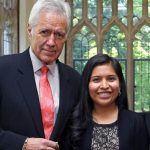 Alex Trebek, host of Jeopardy!, said that attending Fordham proved to be a transformative experience for his son Matthew, FCRH ’13. To make a Fordham education possible for others, especially students from underrepresented populations, Trebek created a $1 million scholarship for students from Harlem. The first Trebek Scholar, Estefania Cruz, is a history major who plans to become a social worker. 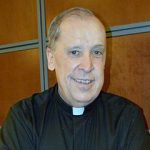 Longtime communications professor Michael V. Tueth, SJ, retired from Fordham this year, but not without having earned a reputation as “master of mirth and the sultan of sass” among students he taught over the course of two decades. His firm belief that religion makes things funnier, coupled with his own brand of humor, led one well-known Jesuit, James Martin, SJ, to describe him as “one of the funniest people I know.” 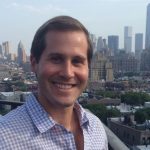 3. Cancer Survivor Invents T-Shirts With a Purpose (By Nicole LaRosa)

In the final year of his life, entrepreneur Alex Niles, GABELLI ’11, (1983-2015), devoted his energies to founding CureWear, an apparel brand for cancer patients and their families, featuring a signature T-shirt that patients can wear during chemotherapy treatments. Although Niles succumbed to cancer in April, his spirit lives on in his family, friends, and in CureWear, which is still going strong and has given back a portion of its profits to cancer patients. 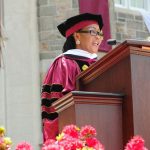 For the first time, Fordham created a dedicated web page for this year’s graduation and highlighted a drone video of the May 16 ceremony, Commencement 2015 From Above. Also featured on the page was coverage of the commencement speech, delivered this year by Nana Lordina Dramani Mahama, First Lady of the Republic of Ghana. 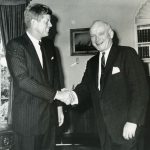 1. Metadiplomat: The Real Life Story of Bridge of Spies Hero James B. Donovan (By Ryan Stellabotte)

A FORDHAM Magazine cover story on alumnus and Cold-War-era lawyer James B. Donovan, FCRH ’37, was published on the same day that a Steven Spielberg movie about Donovan (who is portrayed by Tom Hanks) was released in theaters. The espionage thriller, in which Donovan is asked to defend a Russian agent in court and undertake a risky “spy swap,” is still playing on the big screen and looks likely to be among the Oscar-nominated films of 2015.