skip to main content
Return to Fordham University
You are at:Home»Inside Fordham»On Faculty Technology Day, Embracing Digital Citizenship
Photos by Anibal Pella-Woo
Fordham’s annual Faculty Technology Day, sponsored by Fordham IT, held on May 22, focused on digital citizenship and the role of educators in helping create a more trusted media, in an era when the average American is digitally connected more than 12 hours each day.

Bill Baker, Ph.D., the Claudio Acquaviva Chair in the Graduate School of Education and director of the Bernard L. Schwartz Center for Media, Public Policy, and Education, presented “The Digital Media Transition: Redefining the American Media Landscape,” in which he called for more digital citizenship.

Keep up on campus happenings
Subscribe to Fordham News
“It’s one thing to have the technology, but it’s another thing to have the content—and that’s where people like our Fordham faculty come in,” said Baker. “We need to use our minds to say how can we can use technology in the way that . . . not only does the most good, but makes the greatest impact on our society.” 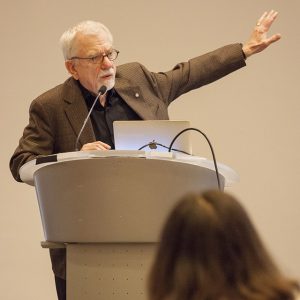 With hundreds of television channels to choose from, and thousands of on-demand options, Baker said the American populace has become fragmented in its choice of news sources. He contextualized today’s landscape by comparing it to a time, a few decades ago, when the CBS Evening News with Walter Cronkite provided Americans with their “water cooler conversations” the next day.

“All of our news came from that trusted source: Cronkite told you stuff you didn’t want to hear but needed to hear,” he said. “But not anymore, that’s one of the reasons why we’re so messed up.”

Today’s choice of news sources allows viewers to select news that fits one’s viewpoint, and “we end up reinforcing our own beliefs, and reinforce our own prejudices,” Baker said.

Moreover, during the last presidential election, Baker shared a disturbing statistic: Of the total Facebook engagement for the top 20 election stories, 8.7 million people got their information from fake news while 7.3 million got their news from mainstream established media.

“More [Americans] believed in the fake than real news,” he said. “We have to figure a way to get more trusted mainstream media.”

He said that, in Germany, a no-frills, 15-minute public news broadcast had a larger audience share than all the American news broadcasts combined. German public media is so trusted that the government pours $10 billion into it every year, as opposed to the $400 million contributed to America’s public broadcasting—which is also under threat by the Trump administration, he said.

Baker added that the administration’s opposition to net neutrality is a threat to smaller players, like pubic media, independents, and new startups.

“They will end up being second-class citizens,” he said.

Fighting Back With Facts, and Wikipedia 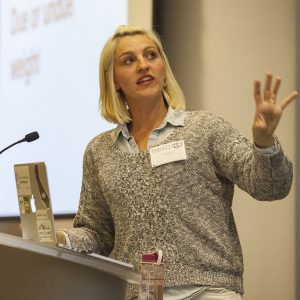 In the afternoon session, Samantha Weald, outreach manager of the Wiki Education Foundation, encouraged faculty to help shore up fact-based knowledge by incorporating Wikipedia projects into their coursework, particularly on the graduate level.

Once viewed as an unreliable source, Wikipedia’s credibility has grown over the years, she said. Yet, the platform has a “gap” problem.

“Information is only as good as how readily available it is,” she said.

College students can fill in those gaps with their original research, while also folding more good-sourced academic material into the free, public, accessible site, she said. According to a Knight Foundation study, Wikipedia is the most-used source of news, with eight billion page views a month.

“Imagine a world in which every human has equal access to knowledge—for free,” she said. “Teaching our students to become digital citizens [can]make that a reality.”

Two Fordham faculty members Harold Takooshian, Ph.D., professor of psychology, and Carla Romney, D.Sc., associate dean for STEM and director of pre-health education
said they’d already used Wikipedia projects in their courses. In his Social Psych course, Takooshian assigned students to come up with 30 biographies of people who were virtually unknown in their field.

“Instead of assigning a paper, I assign[ed]Wikipedia entries,” said Takooshian. 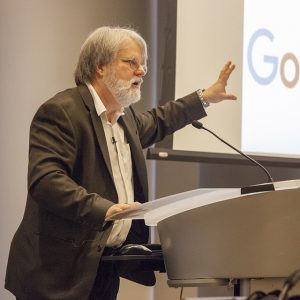 Weald said her foundation works with colleges around the United States and Canada to create Wikipedia-connected courses; to date, some 358 courses are ongoing.

Janet Sassi contributed to this article.