skip to main content
Return to Fordham University
You are at:Home»University News»New Campus Center to Be Named for Father McShane

Fordham will name its new campus center in honor of Joseph M. McShane, S.J., who will step down in June after 19 years as University president. The dedication will take place at the Rose Hill campus, just outside of the new center, on Wednesday, April 27.

Festivities, food, and live music will follow at the RAM Fest on Edwards Parade at 5:45 p.m.
The celebration will begin with a Mass of Thanksgiving at the University Church at 4 p.m.
All students, faculty, and staff are welcome.

A Legacy of Growth 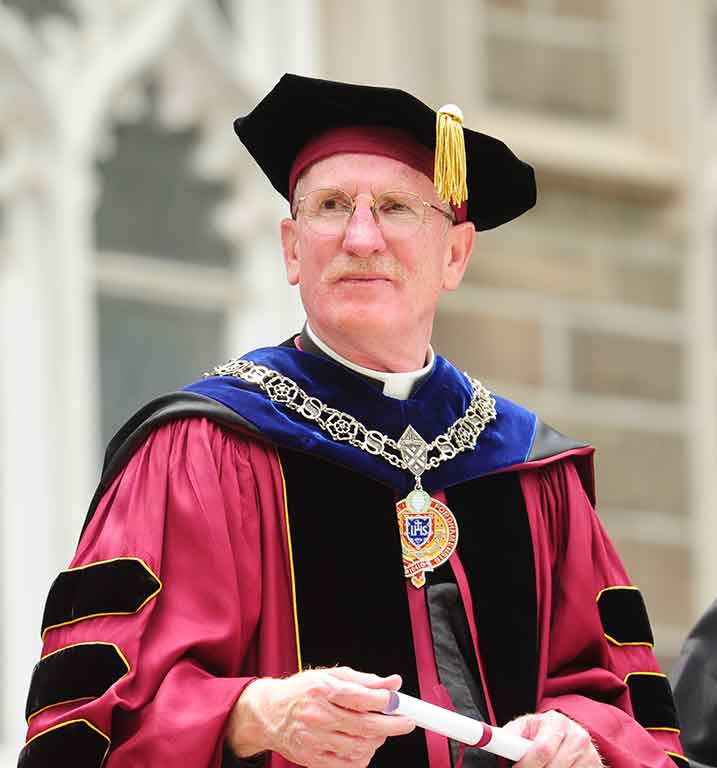 The naming of the modern, amenities-filled new center pays tribute to Father McShane and his 25 years of service to Fordham—as dean of Fordham College at Rose Hill from 1992 to 1998 and as president of the University since 2003.

The campus center is one of many capital projects that are part of his legacy. Others include Rose Hill’s Hughes Hall, home of the Gabelli School of Business; Campbell, Salice, and Conley residence halls, and the Museum of Greek, Etruscan, and Roman Art in Walsh Family Library. At Lincoln Center, he led the creation of the dramatic 22-story Fordham Law School and residence hall, which opened in 2014.

During his tenure, the University also established the Fordham London campus, increased financial aid from $78.3 million to $315.1 million, increased the number of endowed faculty chairs from 23 to 71, and this past year, recruited the largest, most diverse class in its history.

The Joseph M. McShane, S.J. Campus Center: A Space to Recharge and Connect

The four-story building features a state-of-the-art fitness center on the lower level, a 9,500-square-foot student lounge on the first floor, expanded offices for Career Services, Campus Ministry, and the Center for Community Engaged Learning and a large, versatile space on the third floor designed for meetings and special events.

The addition represents the first phase of the campus center project. When all phases are completed in 2025, the campus center will include a large indoor arcade bathed in natural light; a redesigned Marketplace dining area; bigger and better spaces for student clubs, an expanded ballroom; and a new strength and conditioning center dedicated to Fordham athletics. The enclosed glass arcade will connect the new campus center with the Lombardi Center and the historic Rose Hill Gym.

Watch the livestream of the event here beginning at 4 p.m. on April 27.

Please note: Attendees must show a photo ID and proof that they have received all CDC-recommended vaccinations against COVID-19, including a booster dose, if eligible. Masks are recommended indoors but are not required. Students, faculty, and staff may gain admittance via VitalCheck.