The outdoor dedication ceremony, held in front of the gleaming four-story addition that opened in February, drew hundreds of students, faculty, staff, and friends to the official ribbon cutting of the newly christened Joseph M. McShane S.J., Campus Center.

‘Only in New York’ 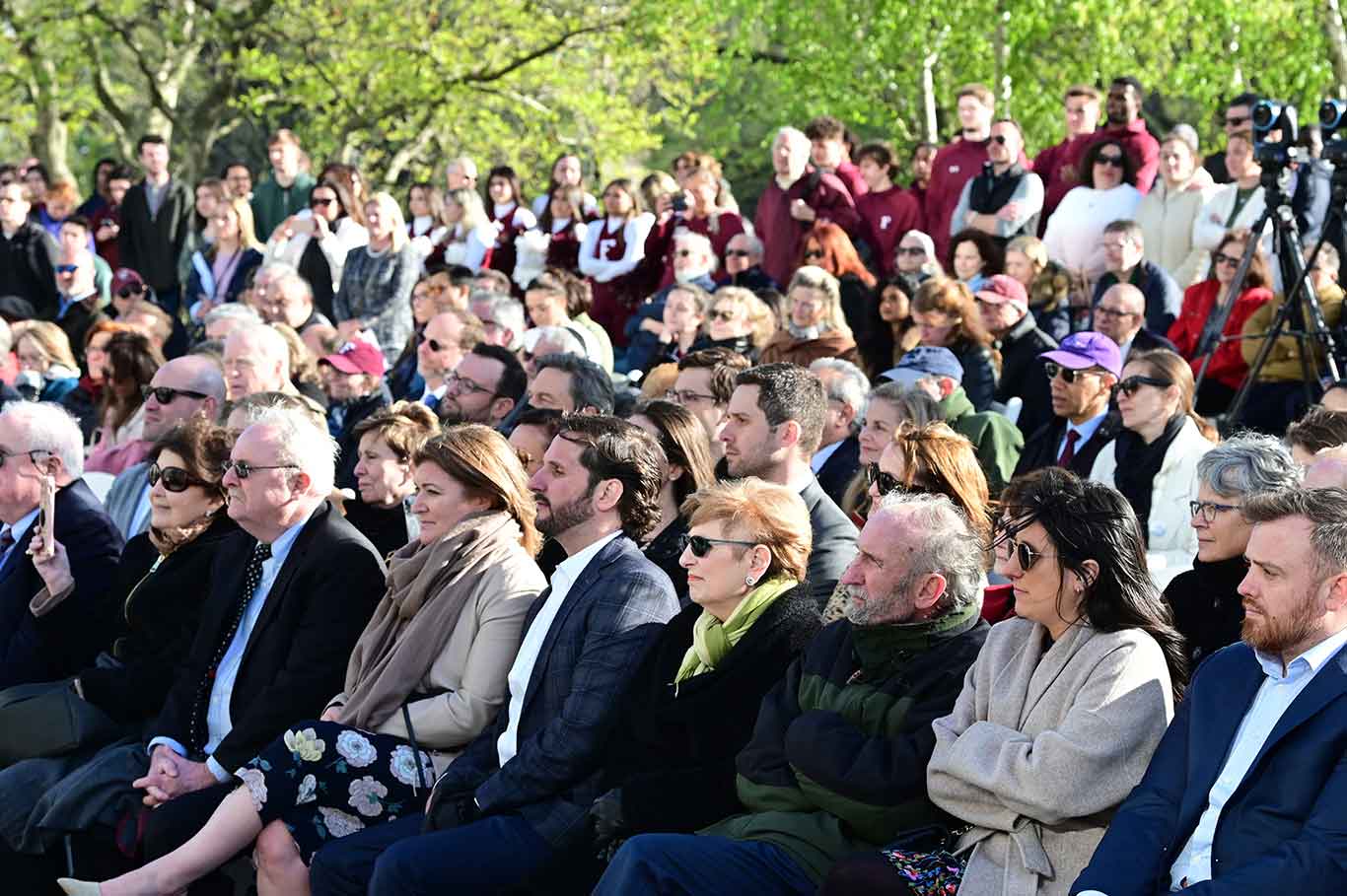 Bloomberg reflected on how he met Father McShane shortly after he was elected mayor in 2001.

“I came to see what an exceptional leader Joe really is. His mind is always racing, his drive is always relentless, his compassion is always boundless, and his Irish wit is always on,” said Bloomberg, who also spoke at the ribbon-cutting for Fordham’s Law School building in 2014.

Speaking from the podium on Wednesday as the wind howled, he joked that ‘Only in New York could a Jewish guy around the corner from a building honoring an Italian football coach celebrate an Irish priest.”

“The common denominator in everything Joe does can be summed up in one single word, and that is service, especially to young people. This wonderful new campus center, rightly named in his honor, certainly testifies to that.”

A Legacy of Transformation 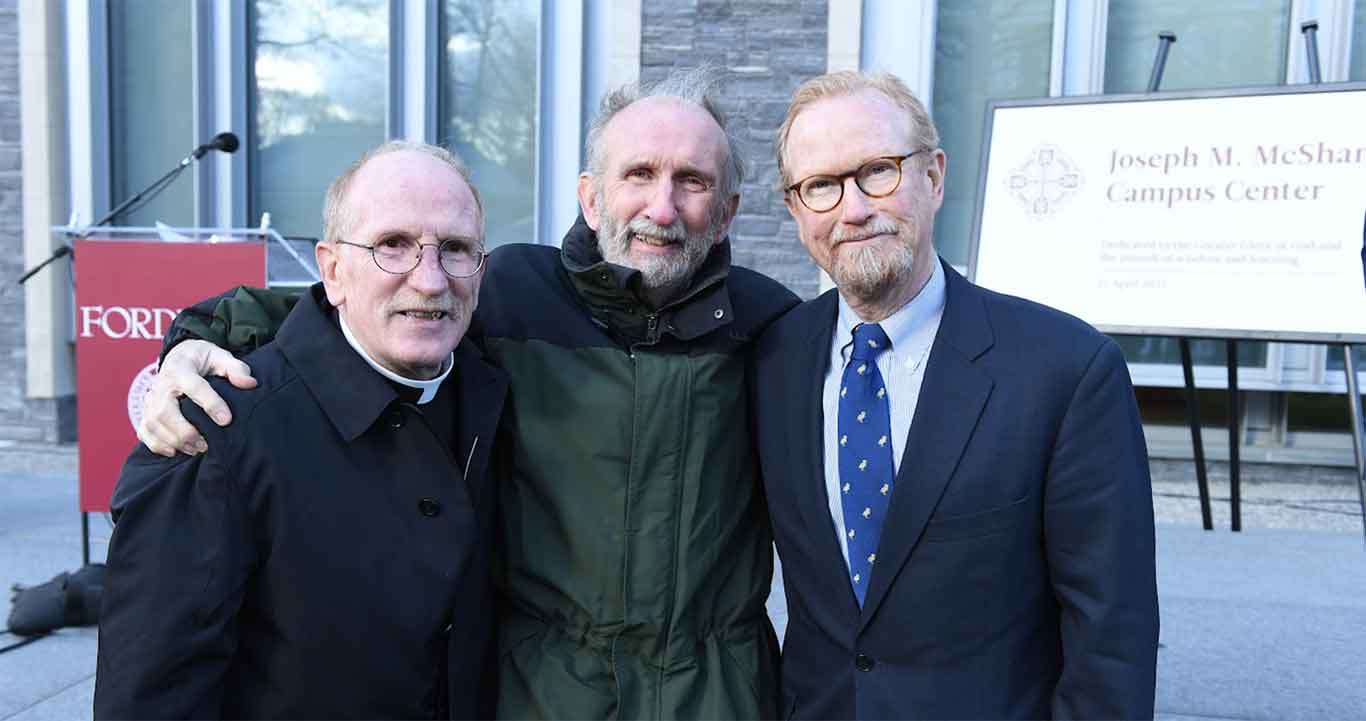 In his 19 years as president, Father McShane is credited with overseeing the investment of $1 billion in infrastructure and raising more than $1 billion in funds for the university.

In addition to the campus center, other capital projects that are part of his legacy include Hughes Hall, the Rose Hill home of the Gabelli School of Business; Campbell, Salice and Conley residence halls; and the Museum of Greek, Etruscan, and Roman Art in Walsh Family Library. At Lincoln Center, he led the creation of the dramatic 22-story Fordham Law School and residence hall, which opened in 2014.

During his tenure, the University also established the Fordham London campus, increased financial aid from $78.3 million to $315.1 million, increased the number of endowed faculty chairs from 23 to 71, and this past year, recruited the largest, most diverse class in its history.

Robert Daleo, chair of Fordham’s Board of Trustees, opened the ceremony with a reading of a letter from President Joseph Biden, who hailed Father McShane for having “led the university with faith, dedication, and love through unprecedented challenges and an ever-changing world.”

‘The Modern Heart of University Life’

Daleo noted that it was fitting that the University should name the center, which was originally constructed in 1959, after Father McShane.

“The McGinley Center was a structure that was sturdy, functional, and met the needs of its time, but has now been transformed into the beautiful, modern, heart of University life, and a fitting place for our stellar students, faculty, and staff to gather, eat, play, and learn,” he said. 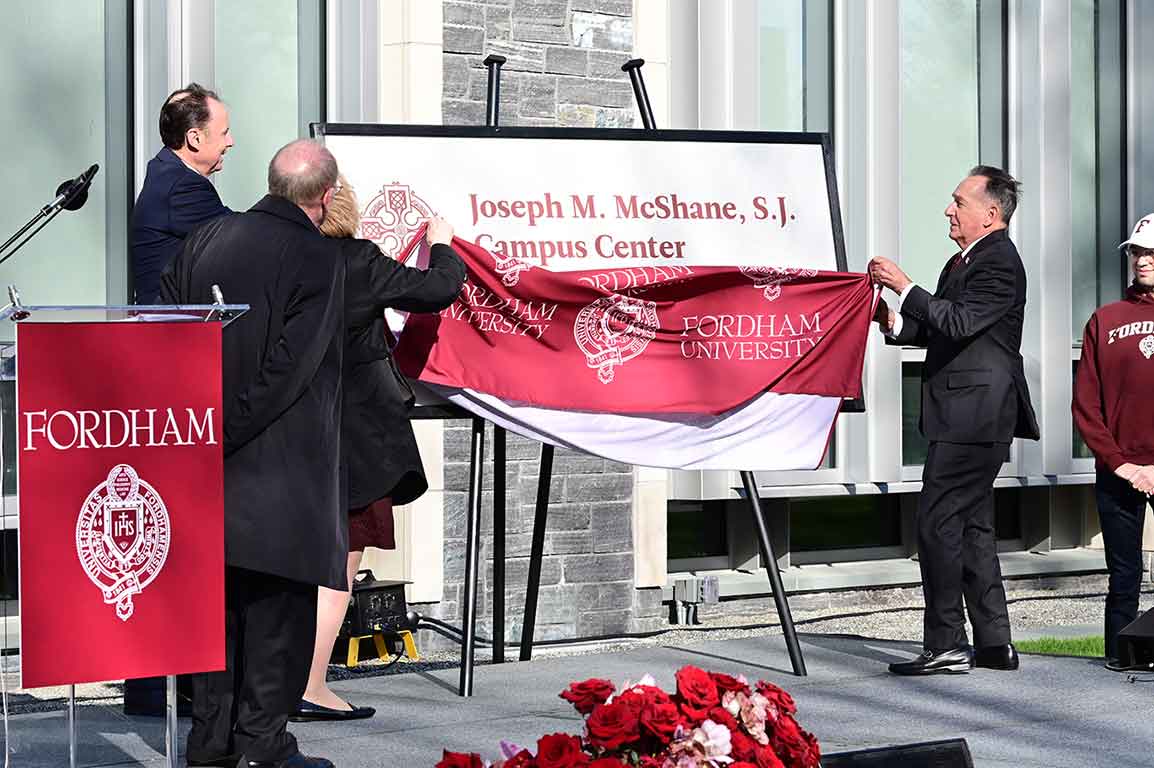 Reuter highlighted the building’s Career Center, Campus Ministry offices, and areas for student involvement. He also noted that the Ram Fit Center showcases the importance of holistic health, while spaces such as the lounge are now filled with laughter, reflection, and the occasional game of pool.

“The space allows us to become what Father McShane envisioned for us: to be people for others, students interested in seeking the magis, understanding and celebrating diversity, developing more informed perspectives, and becoming people of character, formed by the Jesuit tradition,” he said.

Santos said that for commuters, the center is not just a physical structure, but a home for “an intentional community that sets the highest standards of academic, social, moral, and spiritual excellence. “

From the top floor, she said, one can reflect on both Fordham’s Catholic identity and its connections to New York City, thanks to its depiction of the Stations of the Cross and its views of the surrounding area.

“It reminds us that we are blessed with opportunities to learn from our neighbors and contribute to their well-being. Today, the campus center serves as a unifying force in the life of a university that honors each individual and values diversity,” she said.

A Mass of Thanksgiving 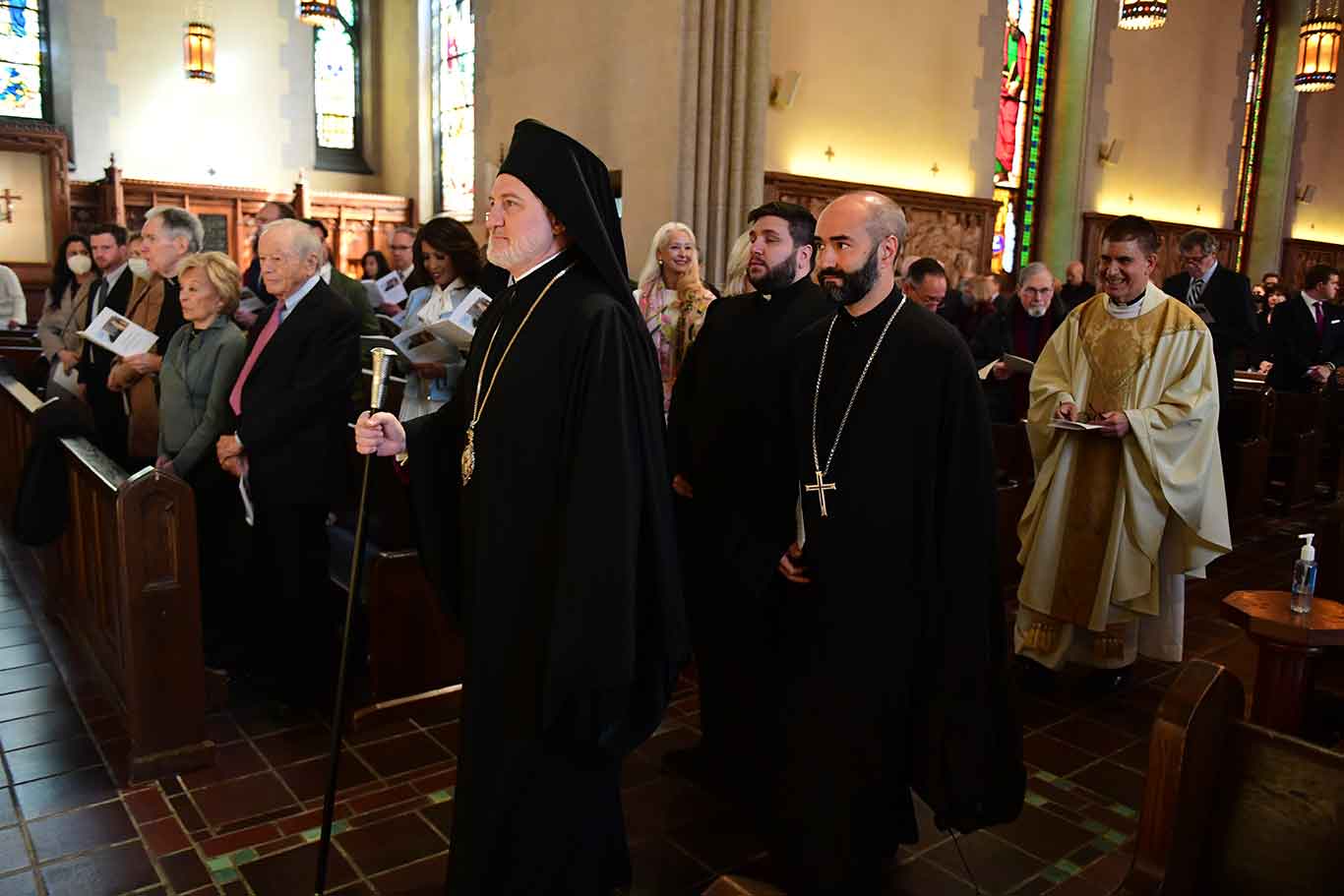 His Eminence Archbishop Elpidophoros of America, Primate of the Greek Orthodox Archdiocese of America

In his homily, Monsignor Shelley, author of Fordham, A History of the Jesuit University of New York: 1841–2003 (Fordham University Press, 2016), credited Father McShane with personifying the idea of cura personalis, or care for the whole person.

“If you’re looking for a monument to Joseph McShane, look around you,” he said.

Before leading a group in a ribbon-cutting, Father McShane insisted that the focus of the celebration be on the whole community.

“This is about Fordham, a place that is an extraordinary place, where miracles happen every day, a place where character is formed, hopes are born, and talent is challenged,” he said.

“That is what we are about. We’re a dream machine, in a certain sense, and we unleash great people in an unsuspecting world, people who know to ask the right questions. That’s our gift to the world.”

Watch the whole dedication ceremony here. Read tributes submitted in honor of Father McShane here, and watch a tribute video for him below.