skip to main content
Return to Fordham University
You are at:Home»Campus Locations»Rose Hill»Namibian President Returns Home to Fordham
“Fordham introduced me to African studies. I brought Africanism back with me to Africa from here. And I’ve been an Africanist since then.”
Hage G. Geingob, PhD, FCRH ’70, president of the Republic of Namibia, returned home to Fordham to receive an honorary doctorate of humane letters at the Rose Hill campus on Sept. 22.

“We welcome you back as a son of Fordham, but at the same time we hail you as the Father of Namibia,” said Joseph M. McShane, SJ, president of Fordham.

President Geingob arrived at Keating Hall with an entourage that included his wife, Monica Kalondo. Father McShane showed the president the granite step engraved with his name commemorating the occasion.

As the entourage made its way across Edwards Parade, students basking in the last day of summer sun took in the rare scene: a sovereign head of state, a first lady, the Secret Service, and members of the press casually strolling by. 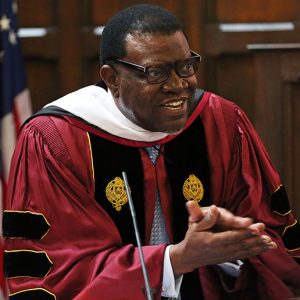 The presentation ceremony took place at Tognino Hall. The ceremony’s faculty sponsor Booi Themeli, PhD, an associate professor of economics and director of the Ubuntu Program between Fordham and the University of Pretoria in South Africa, explained the intertwined histories of the two countries, which border one another.

“Namibia also went though apartheid and fought the liberation struggle,” he said. “Their independence was an inspiration to the struggle that we [in South Africa]were going through.”

It was his nation’s discriminatory policies in education under apartheid that spurred Geingob to seek schooling in the United States in the mid-1960s.

At the time Fordham had a burgeoning African and African-American studies program, born out of the United States’ own civil rights struggle. Geingob began studies at two colleges before a position at the U.N. brought him to New York, and finally to Fordham, where he finished his bachelor’s.

“I was complaining that they [other colleges]were just teaching me Greek history, Greek philosophy, and Greek literature—but I didn’t come for that,” he said. “Someone said to me, ‘You’re in the wrong place. Go to Fordham.’”

Under the tutelage of Tildon Lemelle, PhD, Geingob began to understand the continent.

“Fordham introduced me to African studies,” he said. “I brought Africanism back with me to Africa from here. And I’ve been an Africanist since then.”

Themeli, whose Ubuntu program brings students from South Africa to the University, said that the president was one of several students brought to Fordham from Africa during apartheid.

“Fordham was very involved then and is still involved,” he said. 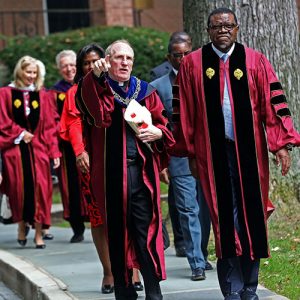 Geingob said that in addition to the learning about Africa, he also was keen to observe American democracy at work. He said that protests of the late 1960s profoundly influenced him.

As part of the “New Africa” his nation is no longer a one-party system, he said, but a place where debate plays out: Systems are in place to make sure that each vote is counted.

“It’s one thing to fight to free the country; its another to govern the country,” he said. “What we’ve established is a democratic architecture. With electoral democracy there must be processes, systems, and institutions.”

As stability has taken hold in Namibia since it gained its independence in 1990, new challenges have come to the fore. But, he said, a developed sense of democracy has caused Namibians to take ownership of their government.

“They say ‘I will watch you if you don’t carry out what you say you will do,’” said Geingob. “With transparency and accountability there will be trust. This, I learned that from you.”