skip to main content
Return to Fordham University
You are at:Home»University News»‘My Family, My Friends’: Father McShane Gives Farewell Speech at Dagger John Day
Photos by Dana Maxson
On June 6, Fordham staff celebrated the founding of the University at the first Dagger John Day since 2019.

The casual event—an end-of-the-year BBQ for Fordham employees under the Jubilee tent at Rose Hill campus—was different this year in two significant ways: It was the last one for Joseph M. McShane, S.J., outgoing president of Fordham, who received a standing ovation for his 25 years of service to the University. And it served as the setting of a new tradition: a recognition of Aramark and Allied Security Services employees who have served the Fordham community for more than 20 years.

Fordham staff pile their plates with food at the BBQ.

His First Day on Campus: ‘It Was A Magical Thing’

After most guests finished their meals, Father McShane delivered an uncharacteristically emotional speech. In one of his final reflections on his time at the University, he reminisced about the first day he stepped onto campus as a 4-year-old boy.

Many years ago, his father—a double Ram from Fordham College at Rose Hill and Fordham Law School—brought his three sons to campus for the first time so they could see what Fordham was like. The senior McShane told his sons that the University was a place where boys became men. But throughout the course of the day, Father McShane said he saw his father return to his former youth.

“My father came over as a man, with three sons in tow—a very serious guy—and as the day went on, he got younger and younger. It was a bit of a mystery to us. But it was a magical thing,” said Father McShane, who would go on to spend six years as dean of Fordham College at Rose Hill and 19 years as president of the University.

Father McShane said that when he began working at Fordham as a dean in 1992, he was guided by his colleagues and the work of his predecessors, in particular James Finlay, S.J., the 30th president of Fordham, and Joseph O’Hare, S.J., the 31st president of Fordham. Father Finlay expanded the University’s residential capacity and strengthened its commitment to the Bronx, while Father O’Hare ensured that both the Rose Hill and Lincoln Center campuses thrived, he said.

“These two were extraordinary Jesuits, great men … I was able to build on what they had done … People have said to me, over and over, ‘Thank you, congratulations, great job’—all of that in the course of the past year since I announced my decision to move onto my next Jesuit work. My story from the beginning is that I have a great team. I still do … I know that the greatness of the University rests on your shoulders. You’re my people. So this 19 years—it’s yours,” said Father McShane, visibly choking up. “If you’re going to cheer, cheer Fordham.”

He asked Fordham’s faculty and staff to promise him three things: 1. Embrace President-Elect Tania Tetlow and show her the beauty of the Bronx and the city. 2. Do not build anything on Edwards Parade. 3. Say hello to everyone on campus.

A Belated Thank You to Longtime Staff 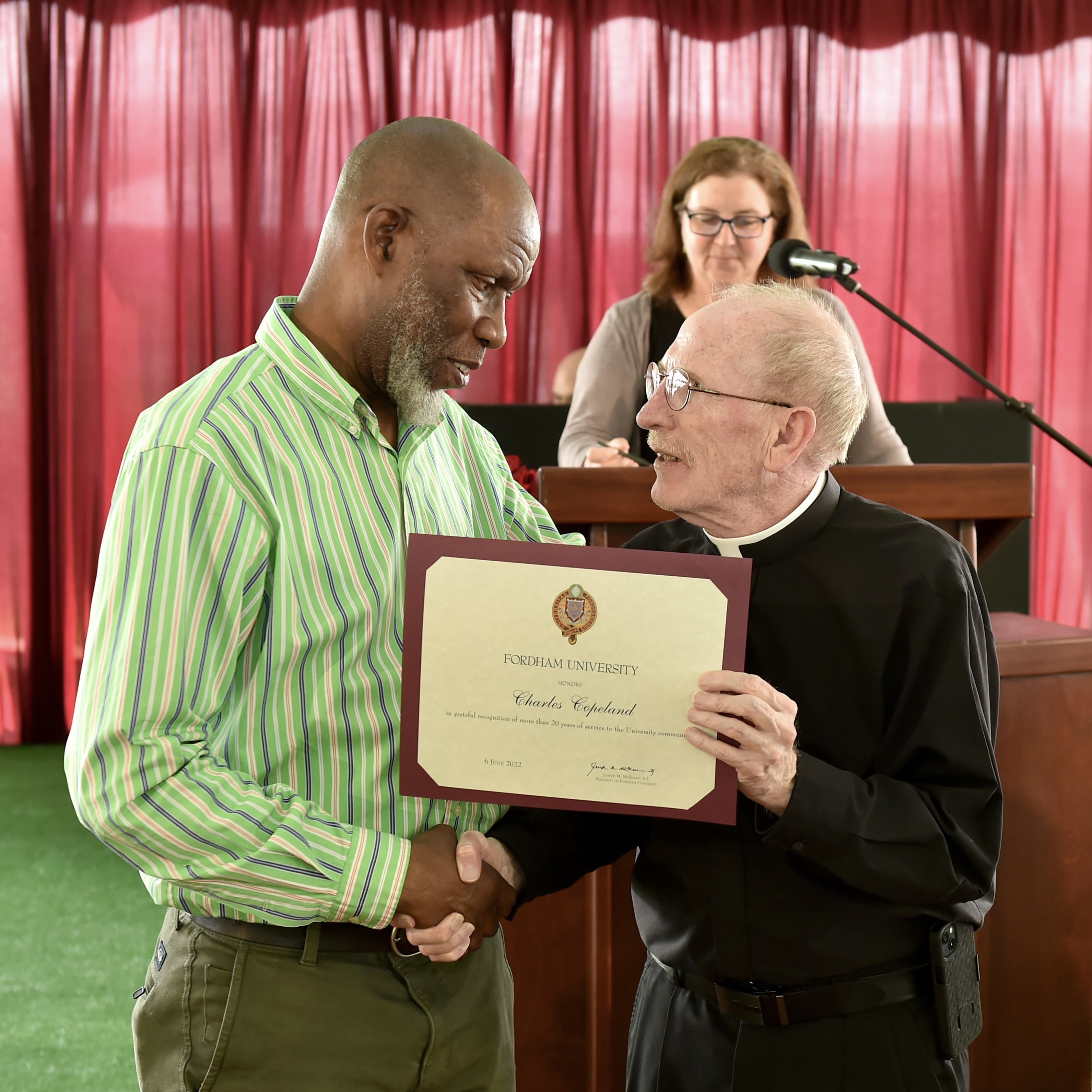 Finally, Father McShane explained the origin behind the new honorary ceremony at Dagger John Day. A few months ago, a longtime Aramark employee at Lincoln Center, Charles Copeland, had approached Father McShane with a request.

“He said, ‘You know, Father, every year we have these Bene Merenti and Archbishop Hughes ceremonies, and we’re delighted to be there … But there are those of us who are not really University employees, but we’re members of the family … Can we figure out a way to recognize them?’ And I said, ‘Charles, give me the names, and we’ll make it happen,’” Father McShane said. He faced Copeland, who stood a few feet away at a nearby table. “So today, Charles, you gave me the names and we made it happen, and I want to thank you for that because you reminded all of us that the family of Fordham is rich, diverse, wide, and sometimes, sadly, overlooked. I apologize for not having the idea myself. So when I say the achievement is ours, it’s yours. This will become a permanent part of Dagger John Day.”

Father McShane presented each Aramark and Allied Security Services employee with a certificate of appreciation. At the end of his speech, he delivered one final message to Fordham’s faculty and staff.

“I love you all dearly,” he said, starting to choke up again. “It’s an honor to know you and it’s a joy and grace to call you—I was going to say McShanes, but that doesn’t really do it,” he said, to laughter from the audience. “I’m really honored to know you all: my family, my friends.” 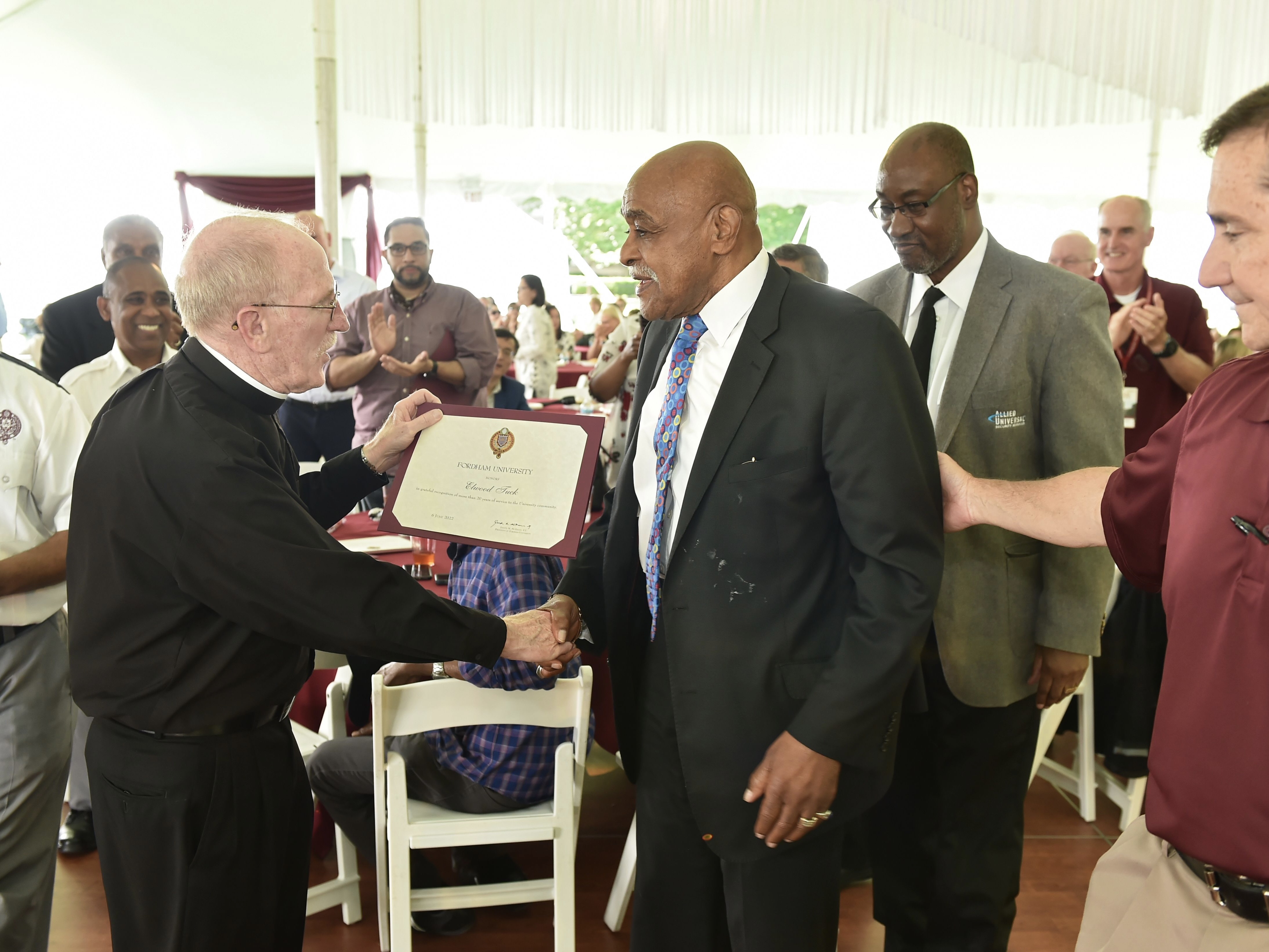 Below is a full list of this year’s awardees from Aramark and Allied Security Services. Not everyone was in attendance.