skip to main content
Return to Fordham University
You are at:Home»University News»Michael Kay and Ted Koppel Honored at WFUV’s On the Record
Michael Kay and Ted Koppel are interviewed by alumna Sara Kugel. Photos by Chris Taggart
Ted Koppel and Charles Osgood attained legendary status among broadcasters—Koppel for 26 years as host and managing editor of the ABC news show Nightline and Osgood for his 22 years as host of CBS News’ Sunday Morning.

Both, it turns out, burnished their nascent broadcasting careers sitting next to each other at ABC News Radio after being hired on the same day in June 1963.

Both revisited the occasion, and the decades that followed, at On the Record, WFUV’s annual awards dinner, on Nov. 7 at Fordham Law School, at which Koppel received the CharlesOsgood Award for Excellence in Broadcast Journalism.

“You’re a model of broadcast journalism at its very best,” Osgood, FCRH ’54, a WFUV alumnus, said in presenting the award to his longtime friend.

Koppel recounted the pair’s early, but ultimately unsuccessful, effort to create a morning news show for ABC television. “We became friends, and we conspired on certain schemes to obtain fame and perhaps also hopefully wealth,” Koppel, who briefly attended Fordham Law School before committing full-time to journalism, jocularly recalled. “All of those schemes failed.”

Nevertheless, he said, with both he and Osgood now nearer to what Koppel called the conclusion of their professional journeys, “it turned out alright.”

Longtime New York Yankees broadcaster Michael Kay, FCRH ’82, was also honored at the dinner, as the recipient of the Vin Scully Award for Excellence in Sports Broadcasting,

The award, Kay said, had deep resonance given that it is named for his broadcasting idol.

“To be given an award with Vin Scully’s name on it is beyond anything I could have ever imagined,” Kay, who will start his 28th year calling Yankees games next spring, said following a short videotaped message from Scully. “He is the patron saint of WFUV Sports, he is the patron saint of anybody who does baseball play-by-play. He is the best at what he’s done.”

In presenting the award, John Filippelli, the president of production and programing at the YES Network, said Kay embodied excellence.

“You are truly a renaissance broadcaster, Michael,” he said. “You’re generous to all your boothmates. You’re warm. You’re extremely knowledgeable, always respectful. You really embody integrity.”

In a Q&A discussion moderated by Sara Kugel, FCRH ’11, a producer at CBS Sunday Morning, both Kay and Koppel soberly assessed the current state of journalism, with Koppel saying that both “the business side” of the industry and the internet were to blame for journalism’s decline. He suggested objective reporting was being compromised by the ease with which people can disseminate their views, which, he suggested, are too often noxious and divisive.

Kay agreed. “Any person who’s sitting in his mom’s basement with Cheetos dust on his fingers could report on news now,” he said. 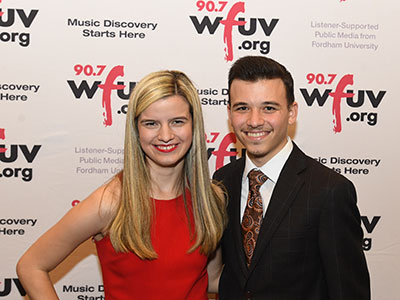 But Kay, who recalled that he has wanted to be Yankees broadcaster since he was 9 years old, nevertheless encouraged the 20 WFUV students at the awards dinner to pursue the trade with abandon.

“Never turn down an opportunity to be on the air,” Kay told Rist, Elia, and their student colleagues. “Work harder than anybody else. That should be the norm. Just like running hard to first base should be the norm, not the exception.”