skip to main content
Return to Fordham University
You are at:Home»Inside Fordham»Lectures and Events»Melding Family and Fordham at the 1841 Awards
Photos by Chris Taggart
Twenty years ago Cesar Duverge came home and told his wife Yvette that he got a job at Fordham as a custodian. She was happy until she found out that he’d be working the night shift.

“I told him to reconsider because I didn’t want him to be away from us in the evening, but he felt it was his responsibility to take care of his family,” she said, referring to the couple’s five children. 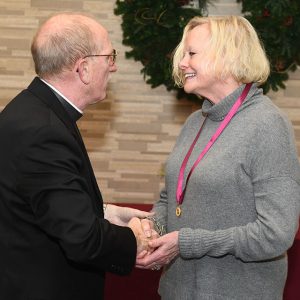 Today, Duverge’s daughter is a freshman at Rose Hill and Cesar is finishing up his senior year at Fordham at the School of Professional and Continuing Studies.

On Nov. 30, the couple celebrated Cesar’s 20th anniversary at the University’s annual 1841 Awards ceremony, which recognized support staff members who have been with Fordham for 20 years.

Joseph M. McShane, S.J., president of Fordham, called this year’s 16 recognized employees the “secret strength and heart of the University.”

“You do everything in a hidden way to bring life, light, and happiness,” said Father McShane. “When I see you in the halls or in offices, you make my heart sing because I know you love Fordham, you love the students, and you love the mission.”

For the Duverge family, the commitment to the University required a commitment by the entire family. Cesar’s son Daniel said that even though his dad worked nights through most of his childhood, he was always there for them.

“He made it to all of our events and he lost a lot of sleep for it, but he got it done,” he said.

Yvette agreed, and made the point that the focus on their children’s education has been the “fruit of his labor.” Now, with his own education nearing completion, Cesar holds very clear ideas about Fordham and his family.

“A place like Fordham opens their minds. It keeps them from viewing the world one specific way,” he said. “It allows them to see the big picture, and that’s something.” 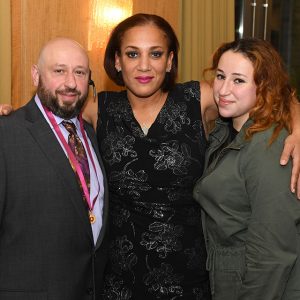 It took Cesar a couple of years to adjust to working the day shift—and he wasn’t the only one. Awardee Freddy Martinez likewise worked the night shift for several years and he said it took him three years to adjust to the daytime schedule.

Like Cesar, his nighttime schedule required a commitment from the entire family.

“I used to cry when he left for work,” said his daughter Carmen, who is one of four children. “We were so happy when he came home; we were all running to him.”

Freddy said that he and his wife Elizabeth met nearby at Lehman College, where they both worked. He got the idea of working for Fordham while he was waiting for the bus on Fordham Road and saw the new Walsh Library being built. He applied and got the job. Eventually, Elizabeth joined him at Rose Hill; she now works in operations.

Again and again, stories of families and Fordham melded at the event.

Moira Linnehan was joined by her “best friend,” i.e. – her mom. 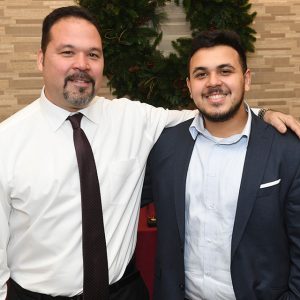 Junior Baez and his son Kevin.

And while awardee Sally Ann Trinagli’s “babies,” a Jack Russell terrier and two beagles, weren’t at the event, they were in her thoughts—Tringali is enrolled in the Graduate School of Social Service’s Nonprofit Leadership program, and will be using her education to lobby New York State for animal welfare.

Awardee and Bronx resident Florencio Baez Jr. was joined by his family— wife Ana and his sons Angelo and Kevin. Kevin graduated from the Gabelli School of Business last spring.

“He chose Fordham to be close to us,” said Baez, of his son Kevin.

A few members of the Duverge family at the ceremony