skip to main content
Return to Fordham University
You are at:Home»Inside Fordham»Media Clips of the Week: All About the Fordham Rams 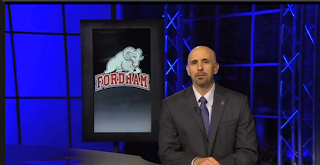 It’s only Monday, but it’s safe to say we found our media clips of the week.

This past Saturday, Fordham football player Sam Ajala set a school record with 282 yards receiving as the Rams, ranked eighth in the Football Championship Subdivision, improved to 8-0 for the first time with a 52-31 victory at Yale. Not surprisingly, the media has taken notice. Here are a few excerpts from this past weekend’s coverage:

“There appears to be new blocks of granite at Fordham.”

“The successful start has raised echoes of the great Fordham teams of the 1930s, featuring linemen known as the Seven Blocks of Granite. One of those “blocks” was Vince Lombardi, who would become a renowned coach. Appearances in major bowls followed in the early 1940s, but Fordham dropped football in 1954, and it returned as a varsity sport only in 1970, at a lower level.”

“…if the Fordham scouting report was required reading last week, the [Yale] Bulldogs realized that their opponent Saturday was offensively inclined and prolific.

If Lombardi, who went on to become maybe the most famous football coach in history, and the rest of the blocks were still around, they might have had a hard time recognizing the game being played by Fordham these days. There’s no doubt, however, they’d love the results.

“The most successful college team in the tri-state area can be found at Fordham University.”