skip to main content
Return to Fordham University
You are at:Home»Living the Mission»Mary Heyser, R.S.H.M., Marymount Alumnae Chaplain, Dies at 79
Feature photo by Patrick Verel. Other photos courtesy of Fordham Alumni Relations
Mary Heyser, R.S.H.M., MC ’62, a beloved chaplain who helped keep Marymount connected to the Fordham family and worked to improve the lives of immigrants and victims of human trafficking, died on Nov. 4 at the Marymount Convent in Tarrytown, New York, after a short battle with cancer. She was 79.

“Sister Mary was much loved at Fordham, and by everyone who knew her,” said Joseph M. McShane, S.J., president of Fordham. “She was a guiding light to our alumni, especially the Marymount alumnae, and of course a dear friend and confidant to her fellow sisters of the Religious of the Sacred Heart of Mary. The Fordham family mourns with Sister Mary’s loved ones and friends, and with the many alumni who knew her company, our grief leavened with the knowledge that she surely rests with the Lord today.” 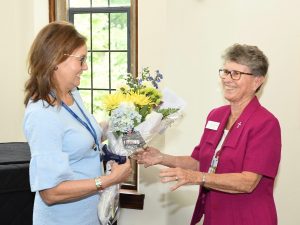 Sister Mary was known for her service to others. As Marymount alumnae chaplain at Fordham, she tended to the spiritual, social, and educational needs of her fellow alumnae. She went wherever she was needed to support those in crisis, traveling as far as Zambia and Zimbabwe. And she did it all with warmth, humor, and patience, said her colleagues and loved ones.

“In this day and age, we’re quick to find faults in people,” said Michael E. Griffin, Fordham’s associate vice president for alumni relations and executive director of the alumni association. “Mary was somebody who always found the good.”

As a child, she was shy, athletic, and “a bit of a tomboy,” said her older sister, Sally Heyser Ryan, MC ’58. They lived on the Long Island Sound, where Sister Mary enjoyed swimming and playing tennis. When they grew up and Ryan had five children of her own—and, eventually, 14 grandchildren—Sister Mary was very fond of them, Ryan said.

“She was my only sister,” Ryan said. “I’m going to miss talking to her weekly and hearing about all the good work she was doing.” 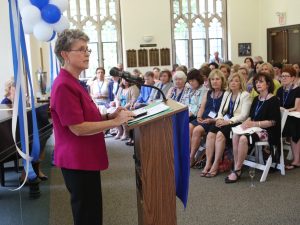 From 2009 to 2018, she served as the Marymount alumnae chaplain in the Development and University Relations (DAUR) division.

“She would always start the day by coming to our section of the office and saying hi to everybody,” said Shannon Quinn, associate director of alumni relations. “She would bring up something or other that she knew about you and check in on you.”

Quinn recalled Sister Mary’s great collection of “snazzy” floral blazers, her opportune sense of humor, and her penchant for Planter’s Punch cocktails. She said Sister Mary taught her three lessons: to assume good intentions in others, incorporate joy in all things, and lead a balanced life.

“The best thing—and something that probably a lot of people would say about Mary—is that knowing her made you a better person. Because you couldn’t be around Mary … without taking to heart her kindness of spirit,” said Quinn.

She was a “bright light” who loved the color pink and saw the positive side of things, said Jane Bartnett, MC ’76, former president of the Marymount Alumnae Board. At alumnae board meetings, she delivered thought-provoking prayers that were relevant to world events. And she was a “healing factor” for many Marymount alumnae, including those who were still unhappy that the college, located on the Hudson River in Tarrytown, had to close in 2007. 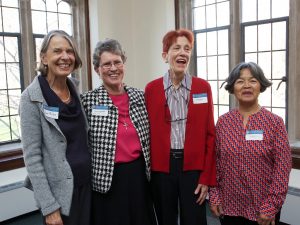 At Fordham, she delivered the opening prayers for many big events, including 2015 Commencement and a Washington, D.C. alumni chapter event honoring Supreme Court Justice Sonia Sotomayor that same year. At the 2015 Marymount Founder’s ceremony at the Rose Hill campus, the school’s alumnae board honored her with the Mother Butler Leadership award in honor of her service.

Sister Mary’s service extended beyond Fordham. In a 2019 story posted by her religious order, she described what it was like to assist refugees at the Annunciation House, a volunteer-run sanctuary in El Paso, Texas. She drove to local bus terminals and an airport, where she helped refugees receive their tickets. She made peanut butter jelly sandwiches, packed food bags for the refugees, and served meals on site. Although she wasn’t fluent in Spanish, she struck up conversations through a Google translation app. Sometimes, she worked as long as 11 hours.

“Mary was a woman who was passionately committed to ministry. She was willing to go anywhere and do anything,” said Catherine Patten, R.S.H.M, MC ’61, a fellow sister and a friend. “She had this great sense of mission and great care for the poor, immigrants, and people who are most in need, wherever she was.”

Sister Mary also spearheaded grassroots efforts against human trafficking. She was featured in the book If Nuns Ruled the World: Ten Sisters on a Mission (Open Road Media, 2014) that described how she, along with six sisters from other New York congregations, formed a powerful coalition in 2005.

“[She] became the glue for the group that would be known as NY-CRC-STOP: New York Coalition of Religious Congregations to Stop Trafficking of People,” wrote the book’s author, Jo Piazza, an award-winning reporter and editor.

The group organized two Fordham conferences on human trafficking. Through the STOP Coalition, she helped raise funds for LifeWay Network to open its first safe house and assisted in opening two more safe houses in the New York City region. She served on the LifeWay Board for eight years.

Last year, she moved to Immokalee, Florida, to begin a new ministry in immigration advocacy. Shortly before her death, she returned to the Marymount Convent in Tarrytown, where she received hospice care.

“She brought so much strength and joy to her role in building the bond between the Marymount College and Fordham University communities,” said Samantha MacInnis, MC ’00, current president of the Marymount Alumnae Board, in an email. “It was impossible not to feel that love and commitment when you were around her.”

She is survived by her sister, numerous nieces and nephews, and the members of her religious community.

All services will be held at the Marymount Convent Chapel, 32 Warren Avenue, Tarrytown, NY. The wake is scheduled for Wednesday, Nov. 6, from 3:30 to 7:30 p.m. Vigil service begins at 7:30 pm. The Mass of Christian Burial will be Thursday, Nov. 7, at 10:30 a.m. The burial will be at Mount Calvary Cemetery in White Plains. In lieu of flowers, gifts in her name may be made to Religious of the Sacred Heart of Mary, 50 Wilson Park Drive, Tarrytown, NY, 10591. 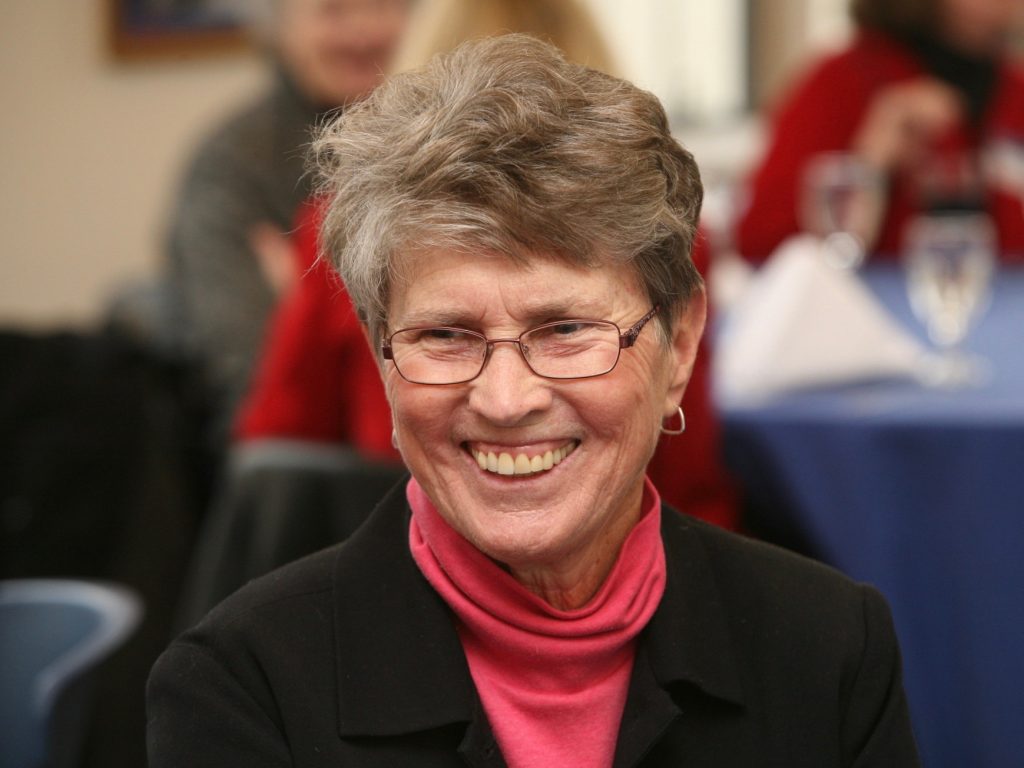