Family and friends of a former trustee who was vital to the creation of Fordham’s Lincoln Center campus gathered at the University’s 45 Columbus Avenue location on April 20 to officially christen the building Joseph A. Martino Hall.

“As an academic institution we’re all about educating students who will be lights for the world,” said Michael McCarthy, SJ, vice president for Mission Integration and Planning. “We dedicate this building to education, to the progress of the sciences and of the arts, and to all forms of learning… I think that’s the most important way we can honor Joseph Martino.” 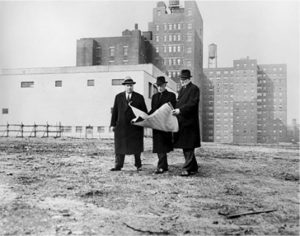 An industry leader and longtime supporter of Fordham, the late Martino was the president and chairman of the National Lead Company and vice chairman of the Port Authority of New York and New Jersey. Guided by his firm belief that industry should support higher education, Martino was integral to securing the land for Fordham’s Manhattan campus in 1955 and led the campaign to raise funds to develop the site.

He was awarded an honorary doctorate of laws in 1956, and in 1963, the University presented him with its prestigious Insignis Medal for extraordinary distinction in the service of God and humanity.

Martino Hall houses faculty and administrators from 18 University departments, offices, and centers that were previously scattered among various buildings around Columbus Circle. The nine-story building on Columbus Avenue is located across the street from the campus that Martino helped grow.

“We had community members in three different locations on nine different floors,” said Brian Byrne, vice president for Lincoln Center. “We wanted to bring everyone closer to home.”

The building bearing Martino’s name comes with a storied past. Built in 1929, the structure was home to one of the first automatic parking garages in New York City. The Kent Automatic Garage used an electrical “parking machine,” which hooked cars by the rear axle and towed them from the elevator platform to a parking spot.

The structure remained a garage until 1943, when it was sold and converted to the Sofia Brothers Warehouse. It served as headquarters to the College Board before becoming part of the Lincoln Center campus. 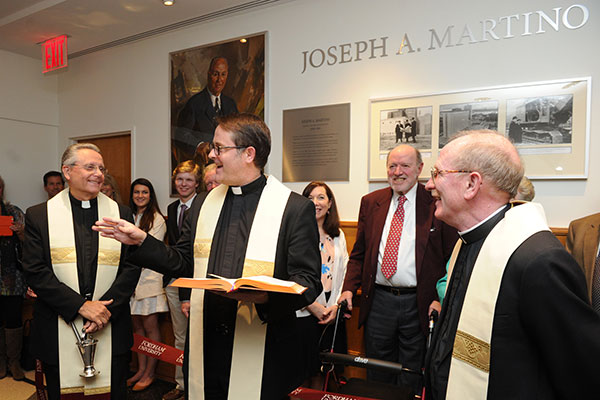 The exterior’s unique Art Deco style—designed by the architectural firm Jardine, Hill & Murdock—was meant to evoke the garage’s innovation and modernity. In 1982, the Landmarks Preservation Commission designated the building as a landmark, calling it a “notable example of the Art Deco style in New York City.”

“It’s a great space, and it has allowed us to be a little unconventional with our workspace,” said Jacqueline Reich, PhD, chair of the communication and media studies department, which occupies the seventh floor of Martino Hall.

“Students and faculty can have meetings or work on projects together… it [allows us]to have an open, collaborative environment to foster innovation.”