skip to main content
Return to Fordham University
You are at:Home»University News»Magis and Music at the Research Symposium for Fordham College at Rose Hill
Arnav Bhutada gives the thumbs on completing his oral presentation.
Gesturing to the stained-glass image of St. Ignatius in the Keating First auditorium, Joseph M. McShane, S.J., president of Fordham, said that the founder of the Jesuit order charged his followers with nearly an impossible task: to follow the greater glory of God or, as it’s known in Jesuit terms, magis. 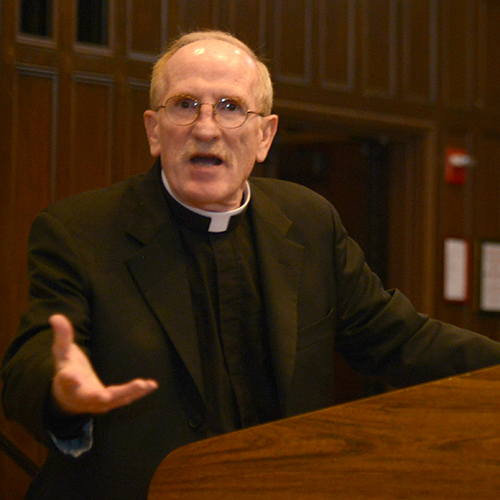 Father McShane told student researchers that magis is in their DNA.

“Remember you are men and women of Fordham, therefore you are sons and daughters of Ignatius. Magis is in your DNA,” said Father McShane at the Fordham College at Rose Hill Undergraduate Research Symposium on May 4. “You can never be satisfied, you will always be driven, you’ll always be lured into the future. And, you will never allow yourself to fool yourself into thinking you’ve achieved all you can.”

The research symposium was held throughout the campus over the course of the day, with a music presentation in Butler Commons, as well as oral presentations throughout Keating, and poster sessions with a reception beneath the vaulted ceilings in the halls of Keating.

As Father McShane had described, the student presenters were indeed influenced by the concept of magis. Though their presentations were thoroughly researched, several students said there was still much more to learn about their chosen subjects. 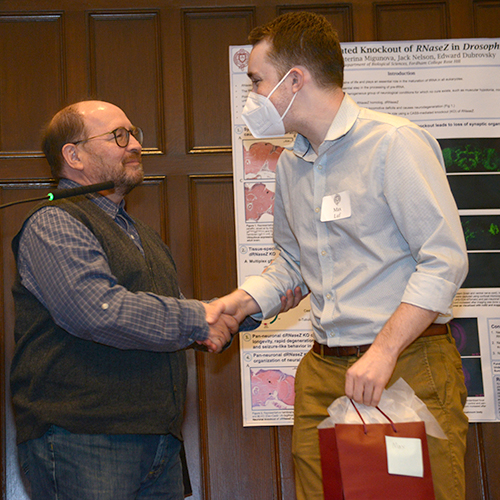 Neuroscience major senior Arnav Bhutada’s oral presentation examined brain injuries caused by “heading” the ball for young people who play soccer. The sport is by far the world’s most popular and is gaining traction in the U.S., where three million children play every year. By examining 10 peer-reviewed studies, synthesizing results, and assessing personality changes in the studies’ subjects, Bhutada concluded that while mild traumatic brain injuries caused by concussions will not affect the development of youth personalities, repeated high impacts may influence a child’s sense of balance and posture. As he heads off to get his master’s in biomedical science at Rutgers, he said he hopes to find a way to continue studying the subject there, as he said most studies on the subject are on adults.

“I played soccer basically my whole life up until high school I saw a lot of my friends get concussions; they usually play through them because if they go to the trainer because they’re dizzy, they’d have to sit out for about half the season,” he said. “Head collisions happen all the time and the coaches don’t always know anything is wrong if the kids don’t say they’re dizzy.”

Sophomore Carolyn Wiedenhoft said she definitely sees a future in her research on approaches to digital and material archives. Her poster presentation compared digitized oral histories to physical documentation, i.e.—primary sources such as photos and letters from the 1970s The materials came from the Fordham’s Bronx Italian American History Initiative (BIAHI), where she is an undergraduate student researcher. The purpose of her research was to find the most engaging way to present the material to the public. 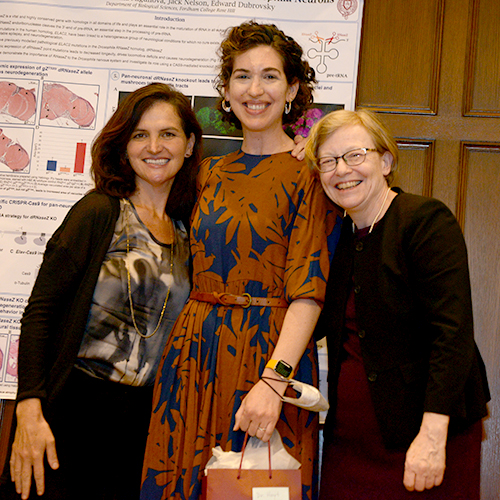 Sara Grey and Lindsay Till Hoyt with Dean Mast after receiving the Mentor of the Year award.

By engaging and enlarging the initiative’s audience through social media and digitizing physical documents from the BIAHI, Wiedenhoft said she grew to appreciate a variety of approaches to working with primary sources.

“Overall, we want to get a more accurate and authentic historical narrative from people who actually lived through the history rather than relying on the media, or shows like The Sopranos or A Bronx Tale,” she said. “We want to provide a solid foundation to present an authentic perspective.”

Wiedenhoft added that in her work, she witnessed the development of interest from the ever-growing Albanian community in the Bronx, potentially paving the way for an Albanian oral history project alongside the BIAHI, which itself sprang from the Bronx African American History Project. For her part, she said she’s curious about Fordham alumni who come from the same area, primarily the Belmont neighborhood.

“I’d love to delve into Fordham’s history in the community,” she said. “I know that in the 1950s 80% of students were commuters, so I wonder what percentage of that was Italian-American and/or Albanian and from the area.”

Nearby, sophomore Danielle Pool presented her poster analyzing how women’s level of education impacted their family-making decisions. She said the controlled variable in her study was occupational prestige because of its direct connection to education, which in turn influenced women’s economic opportunities and the number of children they have. She used data from the National Opinion Research Center (NORC), a nonpartisan research organization affiliated with the University of Chicago. 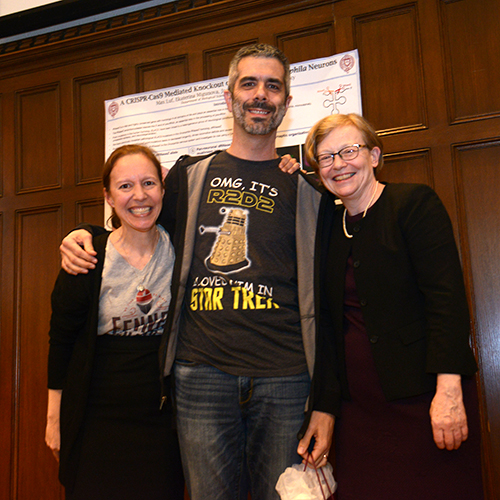 “The more education you have the fewer child-bearing years you have, but the better the journey you have to get a more prestigious occupation,” she explained. “For every year of education, a woman has .05 less children.”

Pool said the main takeaway for her was that education doesn’t simply widen opportunities in the economic sphere, but also in empowerment in general.

“They will know more about contraception use and will be able to have a conversation with their husband and say, ‘No, this is it, I only want to have one child.’ They will likely not feel pressured into following norms. They’ll define their own journey.”

Lastly, several musicians also embodied magis through music. Listen below to “Intuition,” a project by senior Elizabeth Galbo. Professional performers were Sarah Goldfeather on violin and Paul Kerekes on piano.

At the award ceremony at the event, this year’s Faculty Mentors of the Year awards went to Christopher Aubin, Ph.D., associate professor of physics; Sarah Grey, Ph.D., assistant professor of Spanish and Linguistics; and Lindsay Till Hoyt, Ph.D., assistant professor of psychology. The Lifetime Achievement in Mentoring went to the CSTEP program and was presented by last year’s Mentor of the Year, Mark Naison, Ph.D., professor of African and African American studies. The program’s associate director, Renaldo Alba, accepted the award on behalf of CSTEP. The Fordham College Alumni Association Award went to senior Max Luf and was presented by His mentor, Edward Dubrovsky, Ph.D., professor of biological science.