skip to main content
Return to Fordham University
You are at:Home»Inside Fordham»Lincoln Center of the Past Resurrected in Student Presentation 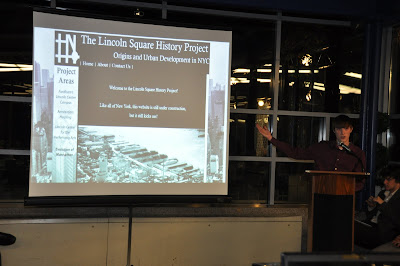 Long before the area between West 60th and 66th streets became home to Fordham University, the Lincoln Center for the Performing Arts and the Amsterdam Houses, the beat of life was very different.

On Tuesday, December 7, members of the Fordham College Lincoln Center Honors Program’s class of 2013 described just how different things were. The Lincoln Square History Project, a presentation culled from 61 essays and 400 pictures, explored historical facts that are both well known (Condemnation of 17 blocks of tenement buildings lead to the sites’ construction) and less known (McMahon Hall was once the site of the Grace Institute, a school Sisters of Charity-run school for underprivileged girls).

The School of Law? It was once the site of the 12th Regiment Armory, built in the late 19th century for the then enormous sum $750,000.

“These two buildings serve to show the character of this space before Robert Moses’ urban renewal. Think of the demographic that we serve today. A private institution, and a well to do performing arts center, and think of the buildings that became before, and it may be said, that truly this space could not have changed more under Robert Moses’ direction,” said Max Slade.

Dan Mallia admitted that he was disturbed by the readings about protests that preceded the bulldozing of the neighborhood.

“It was a tough subject to wrap my mind around, because I naturally sympathized with the residents and the lawyer of who lead the resistance,” he said, noting that the proponents of “urban renewal” were case as villains.

“I’m in the midst of my second year at Fordham, and I have yet to find any evidence that Fordham is an evil corporation which revels in displacing poor residents. In fact, I found a lot of evidence to the contrary. A lot of the administration expressed concern that the process should not be abusive and should actually help the area. Furthermore, it is even harder for our generation to feel anger about the renewal, because today we are enjoying the benefits of it.”

The Amsterdam Houses, which were built in 1947 on the other side of Amsterdam Avenue, were constructed in place of demolished tenements, and like the Lincoln Center itself, faced a numerous obstacles. From the start, tensions were high, as residents mistakenly assumed that like Stuyvesant Town, it would exclude black residents. It also didn’t help that, under the theory that more light and air, the better a family will fare, all the homes of in the neighborhood were destroyed.

“They also demolished the storefronts they frequented, the neighborhood hangouts that they were used to hanging out in, and they also demolished everything that made the community what it was. So people began to feel isolated and disoriented,” said Annemarie Gundel.

The Center has seen its ups and downs too. Avery Fisher Hall, Darrya Rosikhina noted, was finished in 1962 after three years of construction, but had such poor acoustics, that it had to be completely gutted and rebuilt nearly from scratch in 1973.

The Juilliard School building, which was completed in 1969 and is home to Alice Tully Hall, has been called a marriage of form and function, but Jacqueline Battaglia noted that the New York City Opera and the New York Philharmonic were given venues that were of lesser quality than the New York City Center and Carnegie Hall, where they came from, respectively.

“In 1959, the owners of Carnegie Hall refused to renew the Philharmonics’ lease, because they were thinking about demolishing the building to build a more profitable office building,” she said.

Still, like Fordham and the Amsterdam Houses, the she said that Lincoln Center has become an integral part of the city’s fabric.

“Despite how and why they ended up at Lincoln Center, or how they changed the Lincoln Square neighborhood once they got here, these arts institutions are an essential part of the culture of New York City,” she said. “They all began here, some almost 200 years ago, and they continue to be some of the most important arts institutions in New York today.”