skip to main content
Return to Fordham University
You are at:Home»Colleges and Schools»Fordham College at Lincoln Center»Laura Auricchio Teams with the National Library of France to Launch Research Platform
Detail from a map of North and South America in 1868 (Courtesy Bibliothéque Nationale de France)
Fordham College at Lincoln Center Dean Laura Auricchio, Ph.D., has played a key role in a new research platform launched in May by the Bibliothéque Nationale de France, the national library of France. The website, titled “France in the Americas,” brings together archives related to France and the Western Hemisphere in a collaboration that includes some of the most prestigious libraries in the world, including  the British Library, Library and Archives of Canada, the New York Public Library, the National Archives, University of Toronto, the Library of Congress, and Harvard Library.

This is not the first time that Auricchio has crossed the blurred line between archives and library science. Last year, she worked on a similar NEH-sponsored database effort that sought to get museum collections catalogued on the same webpage. Similarly, this effort connects institutions and their resources, but centered a singular subject.

“The beauty of the web is that you can connect a very specific subject like this to similar projects at other libraries, universities, and institutions,” said Auricchio.

Auricchio said that the first part of the project, which focuses on North America, has been completed. The next phase will move on to the Caribbean. To start the project, eight research specialists were brought on board. Auricchio was selected as one of them, as she is an acknowledged expert on 18th-century Franco-American affairs, particularly on the Marquis de Lafayette’s role in the American Revolution.

“The team from Bibliothéque Nationale said, ‘What document or objects or images do you have that relate to the history of France in the Americas?’” she said.

One big question was how the categories for the site should be constructed, she said. The experts settled on an overarching menu that included First Nations, knowledge, politics, economy, society, and cultures. Each category was then further broken down into subcategories. For example, the First Nations category breakdown includes alliances, antagonisms, relations, indigenous North Americans in French fiction, and in the lands of the Indigenous Peoples. 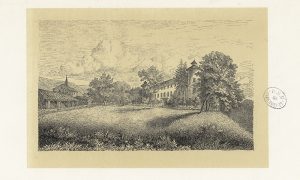 In each case, a website user could go straight to the primary source documents or they may indulge in reading a sample of what another researcher produced using same materials. A user could click on the politics tab and home in on the American War of Independence and then scroll down to an article on Lafayette written by none other than Auricchio. When one reads through Auricchio’s article, the first link that appears takes the reader to an image of Vue du Chateau de Chavaniac, Lafayette’s birthplace. The image, seen here at right, is downloadable and copyright-free as it’s hosted by Bibliothèques et Médiathèques, a government entity. This is the case with most of the content.

One article by Farid Ameur, Ph.D., professor of history at Panthéon-Sorbonne, has a declarative title that may come as shock to French readers: “After Portugal and Great Britain, France was the third most active power involved in the transatlantic Slave Trade.”

“What I’m being told by French or people who live in France is that this is actually news to them,” Auricchio said. “To whatever extent slavery is or is not taught here in the United States, most view it as problem that affects the entire nation and not just the South. Conversely, the French are taught that slavery in France was never legal on French soil, but it was legal on colonial soil and that’s not been discussed very much.”

Indeed, France was responsible for 11% of the transatlantic slave trade, “a huge number,” she said.

“The data had never been collected in this manner, and in this particular case, sponsored by the French government through this project at the Bibliothéque Nationale,” she said.

Auricchio noted that the facts highlighted in Ameur’s article are not new, they’re simply newly acknowledged and newly visible to a larger audience.

“There was an attempt made at this subject matter some time ago, but it was entirely different,” she said. “It was the stories of great individual European men’s achievements.”

Auricchio said that she hopes the platform and the contemporary essays will help inspire future scholars to continue to take an unvarnished look at the past that reveals truths about historical figures and history itself, which in many cases is no less heroic.

“I have written about great European man, but I wrote about him as a human being, somebody who is deeply flawed, like all of us,” she said.