skip to main content
Return to Fordham University
You are at:Home»University News»Kitchen Dispatches: Fordham Community Shares Recipes
Taylor Ha’s video of her mom making Spaghetti Aglio e Olio
From deans and professors to students and staff, Rams from across the University have been sharing photos of homemade food on social media, recipes on Zoom, and stories of sustenance in instant messages and emails. The cherished recipes have also come with stories of home and family. It has become another way that the University maintains community while off-campus.

At a recent Zoom meeting Eva Badowska, Ph.D., dean of faculty of Arts and Sciences made an off-handed comment about how she was growing fatigued with pasta, to which Laura Auricchio, Ph.D., dean of Fordham College at Lincoln Center feigned mock offense. 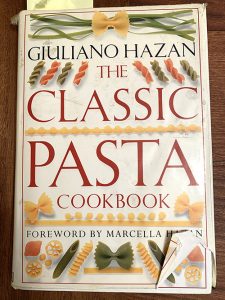 “What? The food of my people?” Auricchio retorted.

“We ended up trading more exciting pasta recipes,” said Badowska, who disclosed the contents of a “raid-the-fridge frittata” she made before Auricchio revived her love of pasta.

“We threw in everything we could think of—there was onion, salami, parmesan, wilted parsley, paprika, and even an avocado in there—it wasn’t half bad,” she said.

The recipes Auricchio shared with Badowska came from a battered copy of The Classic Pasta Cookbook, by Giuliano Hazan (Dorling Kindersley, 1993). The book includes her go-to recipe for Bucatini all’ amatriciana, a dish she made every week while working on her dissertation in Paris in the late 1990s so that she could “have a taste of home.”

“In Paris, I used lardons instead of pancetta because every grocery store sold lardons pre-cut and pre-packaged, while pancetta was much harder to find,” she said. “Today, FoodKick brings pancetta right to my door!” 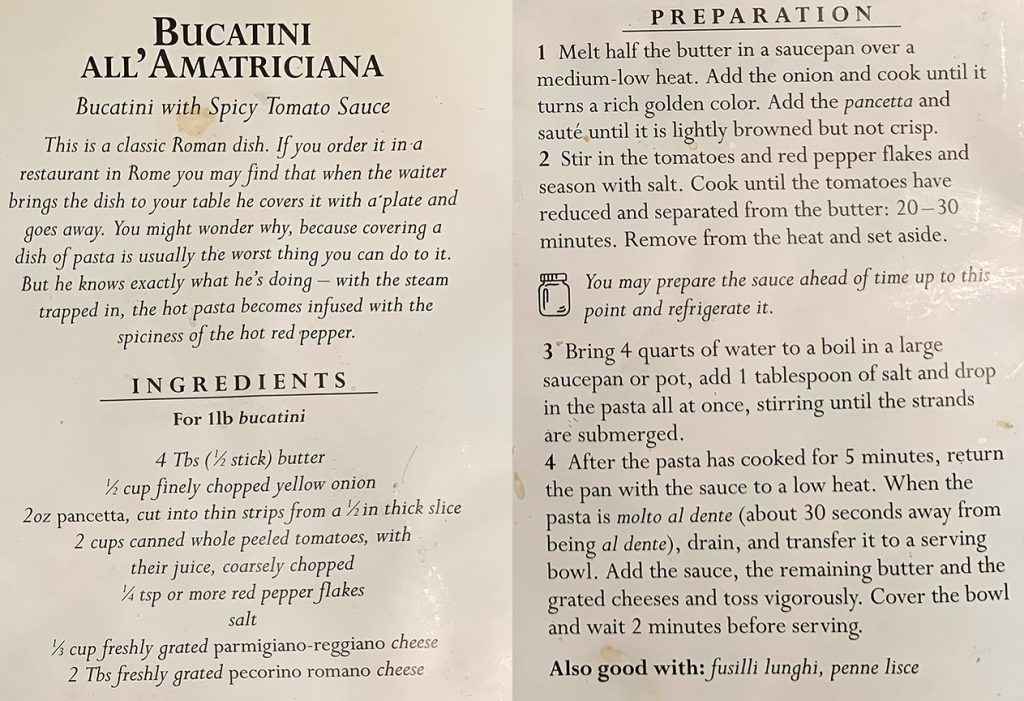 When Fordham College at Lincoln Center sophomore Daejah Woolery moved off campus she started cooking more. She said she doesn’t always have the time to make elaborate dishes but as a Jamaican, she said, “food is super important to the culture,” so she makes an extra effort to cook from scratch.

“I’m excited to make this for my family this week and show them my slight twist on Jamaican boiled dumplings with chicken!” she said.

Before you start making the dumplings prep a pot of boiling water. All you need is flour, cornmeal, and water. I’ve made it without cornmeal with great success so, just omit that if you don’t have it.

Combine flour, cornmeal, water and adjust until you have a dough that doesn’t stick to your hands.

Make small disc-like shapes and drop them into boiled water for about 10 minutes. Try not to overcrowd your pot! Leave them to the side. They can remain in the water after they’re done with the burner off.

If you have a bottle of jerk seasoning you are all set, otherwise, you can make a simple version by combining garlic powder, paprika, allspice, cayenne pepper, nutmeg, cinnamon, crushed red pepper, and onion powder.

I often buy my squash frozen and pureed beforehand to give me a little flexibility when I cook. But if you have a whole squash, cut it, boil it, and puree or mash it finely. Heat it up in a saucepan on medium-low heat and add some of your jerk seasonings to taste. Switch to low heat after you see bubbles. Add about a quarter cup of water if you want a thinner sauce. 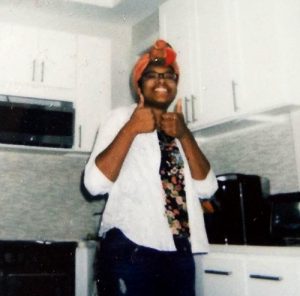 Daejah Woolery in her Upper West Side kitchen

Season the chicken with jerk seasoning and cook it however you’d like; throw it in the air fryer if you’re in a rush or sauté it on the stove like I usually do.

Once the chicken is cooked, add it to the saucepan with the squash and resist the urge to eat it immediately. Let it simmer together on medium-low heat for 5 minutes. Make sure the chicken gets surrounded by the sauce. The sweet and nutty taste of the squash will interact really well with the jerk seasoning.

Now for plating. Add the dumplings onto a plate and put some chicken and squash directly on top!

Anne Fernald, Ph.D., professor of English and Women’s, Gender, and Sexuality Studies, said she’s maintained her Sunday night prep cooking for the workweek, a task that she’d rather avoid. 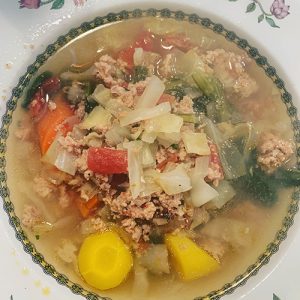 “I realized that if I did not do it, I would revert to my natural diet, which is bread and cheese with some butter,” she said.

She prepares pint-sized mason-jar salads for her and her husband, ensuring healthy lunches for the family, though her two kids don’t indulge too much in the salad.

“I do nothing but teach and cook these days and, in a welcome development, my husband has been cooking a tiny bit, too,” she said.

Her favorite recipe hails from the New York Times’ Samin Nosrat. It’s called Whatever You Want Soup. The soup “serves as a canvas for any kind of chunky soup,” writes Nosrat.

“I used ground turkey, onion, some shredded cabbage, carrots, a tomato, and some green onion,” Fernald said of her version.

Food justice issues are a specialty of Garrett Broad, Ph.D., assistant professor of communication and media studies. He’s quoted extensively in the media on issues that range from food deserts in underserved communities to farmworkers’ rights, but few ask Broad about what he cooks at home.

He said that since he went vegan, recreating recipes from his family has proved a challenge. But he thinks he’s finally nailed a vegan version of his grandma’s fried matzah.

This makes two full meals or 3 to 4 smaller meals. 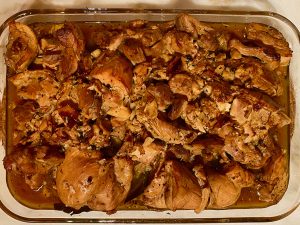 Ramos’ Chicken adobo hot out of the oven.

Clint Ramos, head of design and production at Fordham Theatre Program, has won several awards for his set and costume designs including a TONY and an Obie. He posted a photo of Chicken Adobo on his Instagram that prompted inquiries about the recipe. With roots in the activist street theater scene in Manila, he advises that one eat the dish while pondering “how much of what you enjoyed was indigenous or a result of Spanish colonialism.” 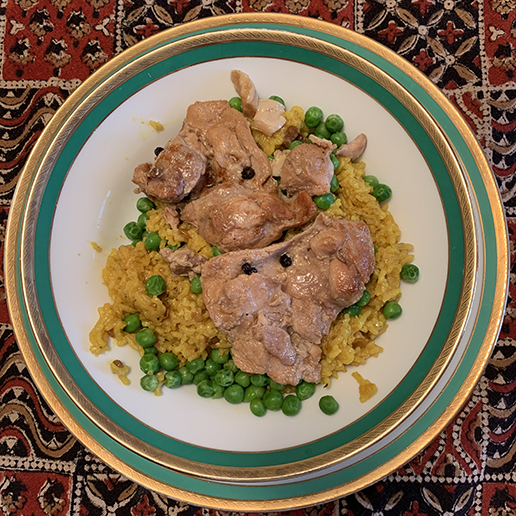 Longer-lasting foods like pasta have been in high demand across the world, especially in Italy. A classic recipe is spaghetti aglio e olio, which blends garlic, olive oil, and parsley into a simple dish. While quarantining in Westchester County, Fordham graduate student and news staff writer Taylor Ha, followed a spaghetti aglio e olio recipe from allrecipes.com and produced a one-minute video on the cooking process with her mother.

She also recorded herself making another recipe that’s gone viral amid the pandemic. “Whipped coffee,” a four-ingredient milk drink topped with whipped coffee that originally comes from South Korea, was recently featured on TikTok’s trending page with more than 312,000 videos using the hashtag #whippedcoffee, according to ABC News. In their home kitchen, Ha and her mother created their own version of their popular drink, complete with a slo-mo video of the production process.

“Both dishes were delicious and super satisfying to make,” Ha said. “I’ll admit I didn’t actually cook, since I was filming everything, but it was nice to bond with my mom at home.”

Anne Takooshian with the bags of cookies she bakes for colleagues

Anne Takooshian works in human resources for Target, the retail giant that has been deemed an essential business during the pandemic. Anne is married to Harold Takooshian, Ph.D., professor of psychology, who examines the impacts of city life. Harold said that through his research he has observed that in times of strife, citizens tend to bolster community. For her part, Anne has been baking a different batch of cookies every day, which she then hands out in baggies to co-workers who pass by her desk.

“I enjoy baking, and it brings joy to others,” said Anne.

Despite Anne’s modesty, her husband sees a larger domino effect on the mental health of his wife and others. He said that after a long day at work, the act of baking takes time and patience.

“It is relaxing to most of the five senses—the feel of the dough, sight and smells as it bakes,” said Harold. “She has control of her kitchen in an uncontrollable world, a chance to try creative new recipes, and tangible positive results at evening’s end, in time for the next morning.”

He added that in return her co-workers devise their own contributions to the workplace. One grateful co-worker gave Anne four pounds of butter for future cookies. He noted that small acts of kindness by one lead to groups aiming to make a positive difference.

Conor O’Kane, dean of first-year students at Fordham College at Lincoln Center, said he and his family have been trying to focus on “healthy, fun, and economical meals,” which have included grilled pineapple pork chops with a brown sugar/soy glaze and grilled green beans and garlic with long grain rice. A sautéed salmon with a horseradish/apricot jam compote with sweet potatoes and broccoli was was also a hit.

“With two young kids, those were wins we took to the bank,” he said.

While he didn’t get into the specifics about the recipes, O’Kane said he couldn’t help but focus on how meals have taken on a new character. As former director of campus ministry, he noted a spiritual dimension.

“They’ve become unhurried and more relaxing affairs and very important beats in a day,” he said.

But the meals have also taken on a new level of intimacy as well.

“As we’re together all day the conversation has shifted from ‘What did you do today?’ to ‘How are you today?’ and the impact has been noticeable.”

He said when the pandemic ends, he hopes what his family has learned from their time together doesn’t dissipate with the return to a fast-paced urban life.

“I’m hopeful that we can emerge from our social isolation changed, and for the better; if we return to life as it was and the pace at which we lived it, something will be lost,” he said. “The reverence, community—and communion—that we’ve found at meals is one of the things I’d like to bring forward for myself and my family. Salmon or sandwiches—we’ve rediscovered something I didn’t know was lost. And I’m grateful for that.”