skip to main content
Return to Fordham University
You are at:Home»Colleges and Schools»Jubilee Celebration Brings Record Number of Alumni to Fordham
Photos by Bruce Gilbert and Chris Taggart
More than 2,000 alumni, family, and friends descended on Fordham’s Rose Hill campus to reminisce and reconnect during the largest Jubilee reunion weekend in University history, held from June 1 to June 3.

The spirit of the ’60s was very much alive during the festivities, as graduates from the Class of 1968 were welcomed into the ranks of the Golden Rams, and on Friday evening, attendees rocked out to the sounds of the Beatles cover band the Fab Faux.

For the second year in a row, the weekend set the stage for celebrating more than $70 million raised by Jubilee classes since they last came together on campus five years earlier. 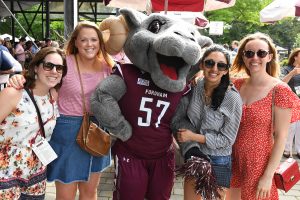 In his welcome address, Joseph M. McShane, S.J., president of Fordham, spoke of the University’s transition from a small Catholic institution founded in 1841 by Irish-born Bishop John Hughes to a nationally-recognized Jesuit university boasting an undergraduate student body of more than 9,000 students from across the world.

He emphasized the University’s commitment to preserving Hughes’ vision for Fordham to be an academic institution that welcomes students of every class, race, and creed. 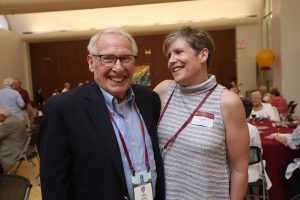 Though there were many couples at Jubilee, not everyone brought a spouse as their date. Don Quinn, FCHR ’58 was there with his daughter, Carolyn Quinn Hickey, FCRH ’88. The pair has attended Jubilee celebrations together ever since Don presented Carolyn with her diploma at her graduation.

“He’s a good dancer,” said Carolyn, a former elementary school teacher who’s now teaching at the Graduate School of Education at Rutgers University. “For all my friends, class of ’88, whose husbands don’t like to dance—he’s the go-to.”

Don was one of several veterans from his class present at the event. He was originally part of the class of 1954, he said, but four years in the Navy interrupted his college career. When he returned to Fordham, he was working, going to school, and raising a family.

Just before the luncheon, members of the class unveiled a plaque that honors two all-time great Fordham basketball players from their year: Jim Cunningham and Bill McCadney. The plaque will hang in the Rose Hill Gym. 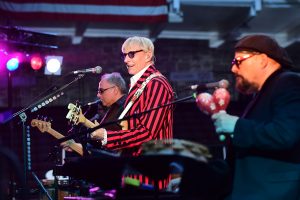 The Fab Faux performed at the Rose Hill Gym on Friday night.

A Call to Do More

Michael Wieloszynski, UGE ’68, told a group of about 50 alumni from 302 Broadway—which once housed Fordham’s schools of education, business, and law—that they still have plenty left to offer the world.

“People of my generation were actively trying to do something, but don’t think we succeeded particularly well,” he said.

“I look at our kids, and our kids’ kids, and … it wasn’t until this year, with gun control, that you had young people making any protests. There’s a lot to be done.”

And although it’s easy at their age to say it’s somebody else’s turn, Wieloszynski noted that “that somebody else is our kids. And there’s a lot of knowledge and lot of experience here. I don’t see people walking around with crutches here, or IVs,” he said. “We need to get involved.”

The mini-reunion, as it was called, offered a chance for the 302 Broadway alumni to reflect on their unique shared experience.

“We were sort of isolated so we got the chance to know everyone. We were a small school but we had the Fordham campus for Fordham activities—the football team, the basketball team,” said retired teacher John Ruzicka, UGE ’68. Standing next to him was Donald Czajkowski, also UGE ’68, whom Ruzicka called “my closest friend,” and for whom he served as best man.

The significance of the 60’s was front and center in “A Look Back, Hosted by the Class of 1963,” at Loyola Hall. The discussion was organized and moderated by Elmer Brunsman, FCRH ’63. (Sadly, Brunsman died later that evening. The University is planning a memorial service to honor him. His obituary can be found here.)

Paul Saunders, FCRH ’63, argued that theirs was the last class marked by insularity. In many ways, it was a class that was shaped more by its 1959 high school graduation, he said. Social justice, which is a major part of the Fordham experience now, and even later in the 1960’s, was not really discussed.

“We were very insular, smothered, satisfied, unquestioning about the world, and narrow. What is consistent from our day to today is the emphasis on academic excellence, but in my opinion, almost everything is different. And I submit, much better,” he said.

Women at the Forefront 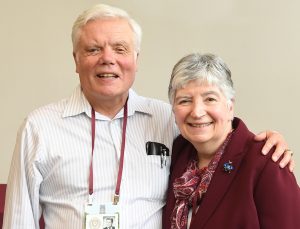 In the McGinley Center, members of the Thomas More College Class of 1968 gathered to celebrate the 50th anniversary of their graduation. It was a groundbreaking achievement, as they were the first members of Fordham’s all-women’s college that operated from 1964 to 1974.

One of those women, Louise Zotttoli Priest, TMC ’68, had an additional celebration to savor: 50 years of marriage to Richard Priest, FCRH ’68, who was also in attendance. They met at a mixer on campus when they were 17, and wed at the University Church in August 1968, shortly after graduation. Zotttoli Priest recalled taking the long bus ride to campus from her home in what would become Co-op City.

“You’d get off at Fordham Road and the Third Avenue El was still here, and everything was dirty and sooty, and you’d walk through the gates onto the campus of Fordham, and it was like stepping through the gates of paradise,” she said.

Throughout the weekend, many women went on record with their memories through the newly launched Thomas More College Oral History Project, which will store their recordings in Fordham’s archives.

Marymount Women Celebrate Their Own

At Duane Library, the women of Marymount College presented Stacey Tisdale, MC ’88, with their Alumnae of Achievement Award. 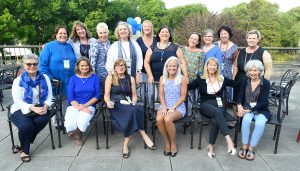 “My cousin once told me the friends you make in college are the friends you have for life, and it’s been so true. In the past 30 years, I think we’ve been through everything together,” Tisdale said.

Maura Gaines, Ph.D., MC ’58, received the Gloria Gaines Memorial Award, given in recognition of service to community, church, and college. The award is named after her sister, also a Marymount alumna, who died at age 24. The Golden Dome Award went to Angelica Hinojosa Valentine, MC ’03, GSS ’05, in recognition of her commitment to advance the legacy of Marymount College.

The event also paid special honor to Sister Mary Heyser, R.H.S.M., MC ’62, who has served as the chaplain for Marymount alumnae since 2009, and who will soon move to Immokalee, Florida, where she will work with the Legal Aid Service of Collier County with Sr. Maureen Kelleher, MC ’60. 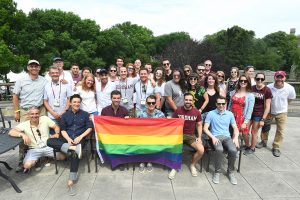 As Jubilee attendees enjoyed a barbecue on Martyrs Lawn, more than 40 Rainbow Rams, the LGBTQ alumni affinity group, gathered for cocktails and camaraderie on the Walsh Library Terrace. Among them were Jim Gifford, FCRH ’68, and Tom Reilly, FCRH ’68. Gifford and Reilly were roommates, but neither knew the other was gay until a few years after graduation.

Reilly was thrilled to discover there was an LGBTQ gathering at Jubilee, since coming out of the closet wasn’t really an option when he graduated.

“The atmosphere was very different, all men wearing suit jackets to classes—we were very stiff upper lip,” recalled Gifford. “So, coming back here and seeing that there’s a gay alliance, that makes me see Fordham in a new light.”

For outgoing Rainbow Rams President Stephen Erdman, FCRH ’13, seeing LGBTQ Golden and Silver Rams celebrating with his class was a bittersweet culmination of his tenure at the two-year-old group. He said that finding out that friends were gay after leaving campus is still a common occurrence (a pair of Silver Rams roommates at the gathering had the same coming out experience as Reilly and Gifford).

“It’s important that we have these groups, because there are still people who feel that they can’t come out on campus,” said Erdman. “But college is an important time to meet each other and be true to ourselves.” 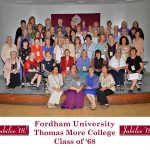 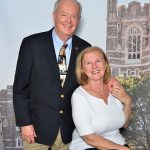 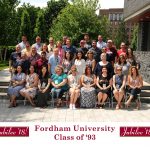