skip to main content
Return to Fordham University
You are at:Home»Editor's Picks»Jubilarians Reflect on Milestones Through the Decades
Photos by Bruce Gilbert, Chris Taggart, Taylor Ha, Patrick Verel, and Ayesha Akhtar
Nearly 2,000 Rams flocked to the Rose Hill campus for three days of reminiscing, dancing, and celebration during the University’s annual Jubilee reunion weekend, held from May 31 to June 2.

In his welcome address at Tognino Hall, Joseph M. McShane, S.J., president of Fordham, urged alumni to not only enjoy their time with old friends but also take pride in their alma mater.

“Be proud of Fordham, and tell the story,” Father McShane said. “What story? Your story. Where you came from. Why did you come from here? What did you get? How did you turn out? Who are you now? And how do you trace who you are now to who you were then?”

The classes celebrating this year raised more than $83 million since their last Jubilee five years ago.

A Tale of Two Love Stories 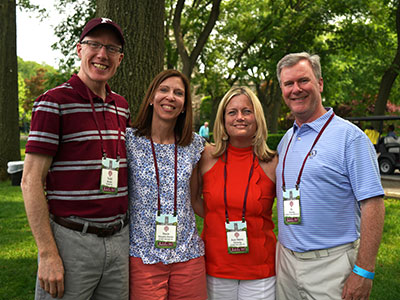 The Brookses and the Dennings reminisced about finding love at Fordham.

Todd Brooks, FCRH ’94, met his wife on the second Sunday of their freshman year. Four months into their relationship, he recalled, he told his then-girlfriend he loved her for the first time.

“She looked at me and she goes, ‘That’s nice,’” Todd Brooks said, while his wife Stacie Kloepfer-Brooks, FCRH ’94, GSE ’95, gently protested. But two years later, she wrote him a handwritten poem about their time together—a memento he’s kept for more than 20 years.

Seated beside the Brookses on Martyr’s Lawn were their classmates, Ann Marie Denning, FCRH ’94, LAW ’97, and P.J. Denning, GABELLI ’94, ’01, both of whom were first-generation Irish-American college students. Today, Ann Marie works in development at Fordham Prep and P.J. is a public relations partner who has served as an adjunct professor at the Gabelli School of Business.

In 1998, the Dennings were married by two Fordham Jesuits: Joseph A. O’Hare, S.J., former president of the University, and Richard J. Dillon, S.J. And like the Brooks, the couple has five children—the oldest of whom just finished his first year at his father’s alma mater.

Reliving Milestones from the ’60s and ’70s

The Sixties were marked by many milestones, including the military draft and Martin Luther King Jr.’s assassination, said alumnus Michael Piellusch as he reflected.

“We were the first class to be drafted,” recalled the Golden Ram. “I ended up joining the Coast Guard, and I’m still working for the military. As it turns out, it was one of the best things I ever did. But some of our classmates didn’t survive.”

During that same decade, students at Marymount College, which became a part of Fordham before it closed, weren’t allowed to wear pants outside the dormitories, said an alumna at the Jubilee cocktail reception.

Marymount alumnae celebrated at a gathering and awards ceremony in Butler Commons on Friday night, where Christina Favilla, MC ’89, GABELLI ’97, was given the Alumna of Achievement Award and Marilyn O’Connor Dimling, MC ’74, was given the Gloria Gaines Memorial Award. Brigid Driscoll, R.S.H.M., GRE ’02, former Marymount president who passed away last October, was also recognized. 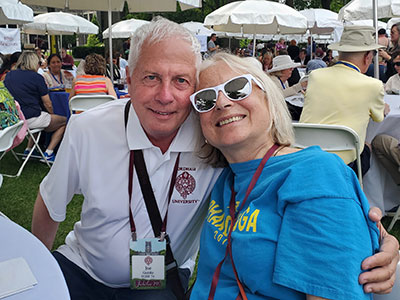 At Saturday’s picnic, Adriana Delia Collins, FCLC ’74, and Joseph Gursky, FCRH ’74, marveled at how much they’d been through together since they first met in Walsh Hall.

“We would meet in the stairwell and chat. We were just confidantes,” Gursky said. “She told me everything; I told her everything.”

Collins said the two remained connected. “Over the years I got married, raised my family, moved around the world,” she said, “but we would always stay in touch.”

They still remember gathering on Martyr’s Lawn, the very spot where the picnic was being held, to watch the last Third Avenue elevated train depart along the tracks next to campus on April 29, 1973. The line was demolished not long afterward.

Although Collins, who now lives in San Francisco, has returned to campus over the years, it was Gursky’s first Jubilee, and only his second time back in the 45 years since graduation. He joked that he majored in “social life” as an undergraduate, but it was also a tumultuous time for him, he said; he had been coming to terms with his homosexuality. Last Saturday, he served as a Eucharistic minister at a Mass at the University Church.

This year’s Jubilee was extraordinary for another Ram from the Seventies: Joan Garry, FCRH ’79, a previous GLAAD executive director who helped persuade the New York Times to include same-sex couples in its wedding coverage.

“This is my first time seeing a rainbow flag anywhere on this campus,” Garry said, gazing at the colorful cloth waving across the Walsh Family Library’s terrace at the Affinity Chapters Open House, where the Rainbow Rams were one of several groups represented. “It’s not just moving, but it’s also for me, a recognition that this institution is ready to accept people and students and faculty for exactly who they are.”

For the younger generation of Rams, Jubilee was a chance to cherish their college years. Jennifer Rivera, FCRH ’14, a communications and Spanish language and literature double major who lived in four different Rose Hill dormitories and studied abroad in Granada, now works at MTV as a coordinating producer. But when she returned to campus last weekend, she rekindled a feeling that never really left her.

“As soon as I walked on campus, I was so overcome with joy,” Rivera said. “I’m so happy that I was able to go to Jubilee because it really just made me appreciate Fordham all over again.”

Hiding a Live Ram in the Backyard 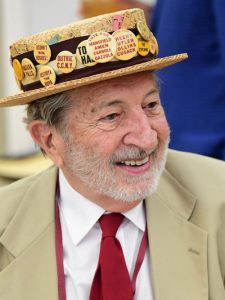 For nearly five decades, the Rose Hill campus was home to more than 20 live rams. Before a big sports game, Fordham’s rival, Manhattan College, would try to kidnap the animal and dye its wool green—Manhattan’s school color.

Sometimes, the rival school succeeded. But one year in the late ’50s, the University temporarily hid its ram in a residential backyard that belonged to Joe Mansfield, FCRH ’59, a commuter student.

“I didn’t tell my parents. My mother did discover it though because she kept asking, ‘What’s that noise?’” said Mansfield, a retired university fundraiser who lives in North Carolina. “And the noise was the ram saying, ‘Ba-a-a-a.’” 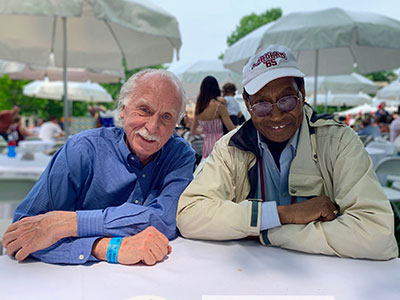 Richard Grant was one of seven black students in the class of 1965. They called themselves “the Fordham Seven,” he said. But his life almost panned out differently. Shortly before his first semester at Fordham, he learned Harvard had accepted him from its waiting list.

“My parents insisted that for the legacy of black people in America, I could not turn down Harvard,” Grant said. “They said, ‘If you don’t go to Harvard, we’re not going to pay [for your education].’”

He attended Harvard for one year. But he wanted to live in New York, and he wanted a Catholic education. While his parents attended graduate school, he had been raised by an Irish Catholic woman who baptized him and showed him what it meant to be a Catholic.

“That’s how I came to be at Fordham,” he said with a smile.