skip to main content
Return to Fordham University
You are at:Home»University News»Joyce Rowe, English Professor with a ‘Formidable Clarity of Mind,’ Dies at 87 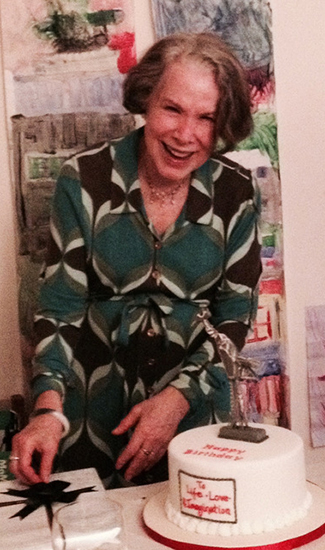 Joyce Rowe, a retired Fordham English professor and former chair of the English department known for her intellectually rigorous, voracious, and kind approach to life and to teaching, died on Nov. 9 in North Bergen, New Jersey, after a long illness. She was 87.

“Independence was deeply innate in her presence and character, and moral sensibility,” recalled Richard Giannone, a retired Fordham English professor. That independence manifested in Rowe’s academic work, appearing “in the breadth and elegance of the style of her criticism,” and permeating the way she thought and taught, he said.

“She set high expectations for her students, but she was also reasonable,” said Philip Sicker, retired Fordham English professor and former department chair.

Sicker recalled how, as English department chair shortly after the complicated and contentious merger of the Rose Hill and Lincoln Center English departments, Rowe’s transparent, pragmatic, and compassionate approach helped unite the department.

“It was her policy, that as far as she could manage, she never let a day go by with problems unsolved,” said Mary Erler, who preceded Rowe as chair of the English department.

In the department, Rowe was known for her maturity and poise, curiosity and fervor, her strong sense of justice, and a robust wit, which she employed often, endearing her to colleagues and students alike.

“She was an unusually sympathetic and discerning listener,” Sicker said. “In a very spirited department that often agreed—but sometimes didn’t—she would listen, not just when she was chair, but in department meetings, very carefully.” 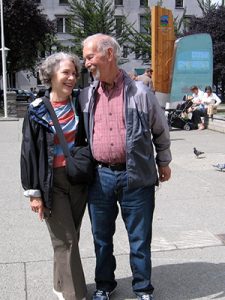 Joyce and her husband, Gerry

Joyce Rowe, neé Allan, was born on Oct. 27, 1935, in Brooklyn, New York, to Beatrice and Samuel Allan. She attended the Dalton school in Manhattan and graduated from Smith College in 1956. In 1959, she married Gerald E. Rowe. Together, the couple had two daughters, Nina and Claudia.

Rowe started her career in academia after raising her daughters, and graduated with distinction with a Ph.D. in English and comparative literature from Columbia University in 1985. Before her Ph.D., Rowe received a M.A. from Columbia and taught briefly in the Fordham Humanities department. She followed her Ph.D. with a visiting professorship at Vassar College before joining the Fordham English department in 1987, where she taught the 19th-century American literature classics.

Rowe was chair of the English department from 1996 to 1998; she retired in 2003. She possessed a deep knowledge of American history and grounding in New Criticism, both of which informed her writing and curricula with a sensitivity to cultural issues like gender, race, and politics, said Sicker and Giannone. In addition to numerous scholarly articles, in 1988 Rowe published a book with Cambridge University Press titled Equivocal Endings in Classic American Novels: The Scarlet Letter, Adventures of Huckleberry Finn, The Ambassadors, The Great Gatsby.

“One was aware of the formidable clarity of her mind,” Giannone, whose office abutted Rowe’s, remembered.

After retiring from Fordham, Rowe remained connected to the University and continued her scholarship, spending hours in the Wertheim room at the New York Public Library researching her wide-ranging interests. In particular, she was fascinated by psychoanalysis and anarchist women in the early 20th century, said her son-in-law, Glenn Hendler, who also teaches American literature in the Fordham English department. Rowe’s daughter Nina teaches at Fordham as well, as a professor in the Art History department. 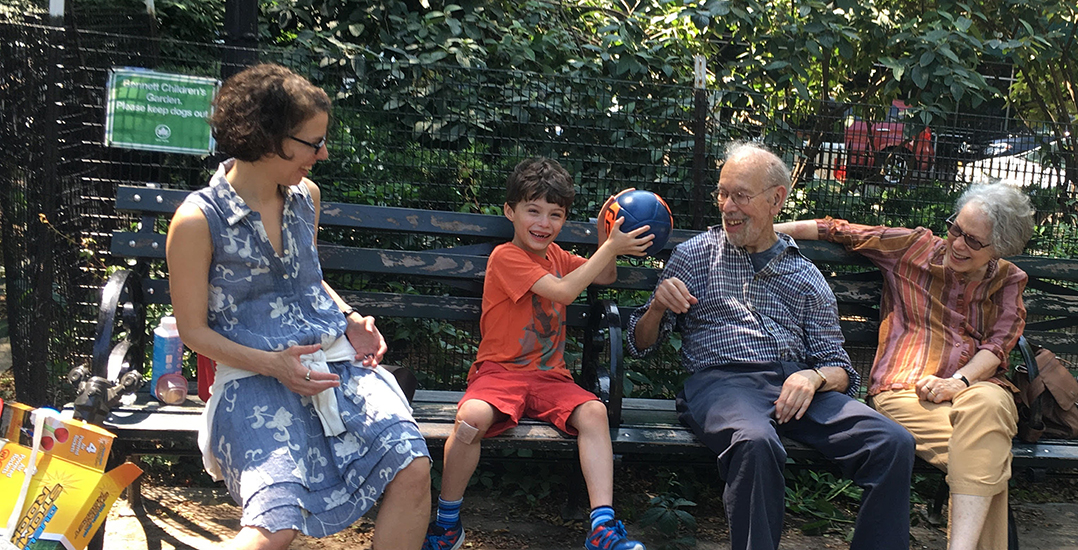 Joyce with her daughter, Nina, grandson Ezra, and husband, Gerry

Post-retirement, Rowe published an essay on Herman Melville’s Moby Dick in The Oxford Encyclopedia of American Literature. Rowe used the payment she received to buy a coffee table, which she cheekily dubbed ‘the Moby Dick coffee table,’ Hendler said.

With the zeal and curiosity she applied to all her endeavors, Rowe and her husband Gerry loved to travel, visiting Turkey, India, China, and the Galapagos Islands, and touring Alaskan waterways. She regaled friends and colleagues with detailed stories of the adventures, encouraging them to make their own trips.

“They are kind of a model for a lot of people, including me, for how to really enjoy retirement. And for years and years, they did so,” Hendler said.

Among Rowe’s most studied authors was Henry James, whose work Rowe dissected in her book, and from whose novel, The Wings of the Dove, Giannone borrowed a phrase to sum up Rowe’s insatiable spirit:

“She was enamored with life.”

Rowe is survived by Gerry and her daughters, Nina and Claudia, along with their families.

Instead of flowers, Rowe’s family requests donations to the New York Public Library, which she loved so much. Memorial donations should be made here. For “notification recipient,” please list: Nina Rowe and Glenn Hendler, 570 Fort Washington Ave., Apt 51B, New York, NY 10033. Memorial services will be handled privately.