skip to main content
Return to Fordham University
You are at:Home»University News»Joseph Koterski, S.J., Philosophy Professor and Spiritual Mentor, Dies at 67
A 2012 screenshot from the Jesuits in Conversation video series
Joseph W. Koterski, S.J., a longtime member of the philosophy department and master of Queen’s Court Residential College on the Rose Hill campus, died suddenly from a heart attack while directing a religious retreat in Connecticut on Aug. 9. He was 67.

“Father Koterski was a model Jesuit, an exemplary priest, a companion both in the Society of Jesus and in our mission, and a dear friend,” said Joseph M. McShane, S.J., president of Fordham. “Wonderfully, he had the kind of death every priest prays for: He died while he was speaking from the heart of the Lord whom he loved and served all his life. He is now at home with that same Lord.” 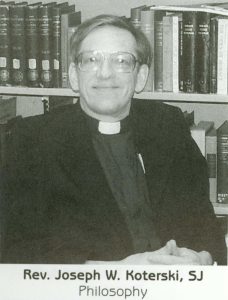 In 1992, Father Koterski joined Fordham’s philosophy department. Over the next three decades, he held many positions, including chair of the philosophy department, director of the master’s program in philosophical resources, and secretary of the Faculty Senate. He taught more than 20 undergraduate and graduate courses in metaphysics, ethics, and the history of medieval philosophy, including two specialized courses for the honors program. He was awarded several honors himself, including a summer faculty fellowship and an undergraduate teaching award.

“Father McShane would sometimes comment, ‘Koterski never sleeps.’ You just wonder where he got all the time to do all that he’s doing: teaching his classes, living and working at Queen’s Court, and all that he does for his students,” said Thomas Scirghi, S.J., associate professor of theology.

At the time of his death, Father Koterski served as associate professor of philosophy and editor in chief of International Philosophical Quarterly, a Fordham peer-reviewed philosophy journal. He was also the master of Queen’s Court Residential College, where he served as an academic adviser and counselor for first-year students over the past two decades.

For as much as he taught his students, he learned much from them as well. Twice a year, he hosted a formal student debate at Queen’s Court. Four nights a week, he hosted “Knight Court,” where students presented any subject of their choice for 10 minutes. One student taught him the rules of rugby; another taught him how to calculate wind chill factor. A third student introduced him to Bollywood and performed a song in a male and falsetto voice. He also accompanied students on Broadway trips, including “Phantom of the Opera” and “How to Succeed In Business Without Really Trying.”

“We have oodles of fun together. But the [main]idea is integrating their studies and social life,” Father Koterski said in a 2012 “Jesuits in Conversation” video.

“I think of myself as part of the late bloomers’ club,” Father Koterski said in 2012, “and I’d love to encourage anybody else to join the club.”

In phone interviews, his colleagues described him as a fun-loving fellow with a deeply resonant voice that could have belonged to a radio announcer. He was a reticent man who avoided small talk, said Father Scirghi, but once he started talking about academia or societal issues, conversation easily flowed. He combined faith and fun in his teaching, including one Halloween where students gathered at the Jesuit cemetery on the Rose Hill campus and learned about the holiday’s religious significance while sipping hot apple cider, said Father Scirghi. But what stood out about Father Koterski, said those who knew him, was his generosity.

“He had an office a few doors down from me. He would be in there for long hours, meeting with students during office hours and outside of office hours, giving spiritual direction to people over the phone or on Zoom,” said Stephen Grimm, Ph.D., professor of philosophy. “He was always willing to help when there were any problems to deal with.” 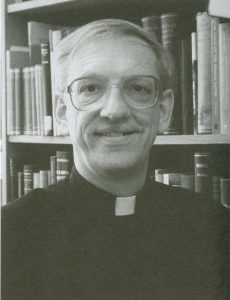 In addition, he stayed in touch with prior students and continued to guide them, said an alumnus.

“A few years after I graduated, I took a more serious approach to my faith, and Father Koterski made himself available. He was willing to talk through difficult issues and approach things with intellectual rigor, but more importantly, a gentle spirit,” said Jared Woodard, GSAS ’13.

Outside of Fordham, Father Koterski lived a rich academic life that spanned the U.S. and several continents. He traveled to California, Texas, Missouri, Hong Kong, England, and Guam to teach courses on subjects he cared deeply about. He regularly went to Haiti for missionary work, and he often worked with groups of nuns around New York, where he presided at Mass or led retreats. He served in leadership positions for many religious and academic organizations, including a two-term presidency of the Fellowship of Catholic Scholars. His sixty-page curriculum vitae is a testament to the hundreds of books, articles, homilies, lectures, and conferences that encompassed his life.

“While an outstanding scholar and teacher, Father Joe Koterski was above all else a Jesuit priest. In Psalm 85(86), David prays, ‘Domine…simplex fac cor meum’ (O Lord…make my heart simple): a line that sums up Father Koterski’s life,” his longtime friend John Kezel, retired director of the Campion Institute, wrote in an email. “He was simply always there when you needed him—for advice, for companionship, for prayer. In all my years of friendship, I never heard Father Joseph Koterski say ‘no’ to anyone.”

In a 2015 interview with America Magazine, a reporter asked Father Koterski what he wanted people to take away from his life and work.

“A greater love for God, a greater desire for union with Jesus Christ, a greater respect for the teachings of the church and a greater ability to reason in a sound way as a grateful response to God’s gift to us of the power of reasoning,” he said.

Father Koterski’s wake will be held on Tuesday, August 17, from 9:30 to 11 a.m. at the University Church, located at 2691 Southern Blvd, Bronx, N.Y., 10458. The funeral will begin at 11 a.m. at the same location. Proof of vaccination must be provided for admittance to campus. Per Fordham University policy, masks must be worn while in the University Church. If driving, please enter through the gate on Southern Boulevard, across from the New York Botanical Garden.