skip to main content
Return to Fordham University
You are at:Home»University News»Jonathon Appels, Longtime Adjunct Professor and Performer Who ‘Loved Every Branch of the Arts,’ Dies at 67
Photos courtesy of David LaMarche
Jonathon Appels, a longtime adjunct professor at Fordham who taught courses in nine departments and three programs, died at his Manhattan home on Nov. 28 after a long struggle with cancer. He was 67.

“Jonathon was a caring and compassionate educator who had the kind of multilayered career that one can only marvel at,” said Joseph M. McShane, S.J., president of Fordham, in an email to the University community. “He was thoughtful and creative, with a talent for drawing connections among disciplines.”

Appels taught in Fordham’s English, African and African American studies, anthropology, dance, history, communication and media studies, Middle East studies, theology, and visual arts departments, as well as the religious studies, comparative literature, and urban studies programs, from 1996 to 2002 and 2009 to 2021. He offered a colorful mix of courses, including “Madness and Literature” and “LGBT Arts and Spirituality: Mystics and Creators,” mostly at the Lincoln Center campus.

“His mind was eclectic and his education and curiosity was unmatched,” said Anne Fernald, Ph.D., professor of English and women, gender, and sexuality studies. “Endlessly curious, he always had a new story of the latest lecture or performance he had attended. He was a wonderful storyteller, with a rich laugh. He took me out to a vegan restaurant once, hoping to encourage me in more healthy habits. He was always cold and wandered the halls draped in wonderful scarves.”

Appels was a scholar, poet, musician, sculptor, and art critic who conducted research in 20 countries, largely in Europe; he was also a member of nine humanities associations.

“He had a very probing mind, and he was very good at connecting the dots between various disciplines and departments,” said his husband, David LaMarche. “He was a very animated and inquisitive person with strong opinions, but not rigid … a free spirit and sort of counterculture, since the time that we were born in, the early sixties, and a sensitive man who loved every branch of the arts.”

But what most academics weren’t aware of, said his husband, was his love for dance.

“He loved teaching, but his first love was probably choreography,” LaMarche said.

Appels was a dancer and choreographer who founded his own dance company, Company Appels, in 1979. He performed across the country and the world, from the Whitney Museum of American Art in New York City to international stages in France, Germany, and Portugal. He choreographed modern dances for scores of performers, principally graduates of the Juilliard School, SUNY Purchase, and North Carolina School of the Arts. One of his favorite courses he taught at Fordham was part of the Ailey/Fordham BFA Program in Dance, run jointly with the Ailey School, said his husband. Even off stage at more casual venues, you could find him dancing.

“He loved disco dancing and he loved to dance, even into his sixties. If we ever went to a gala party or something like that, he’d always be on the dance floor, wild,” said LaMarche, a pianist who first met Appels at a dance class in San Francisco.

Appels’ passion for the arts was recognized worldwide. In 1998, he was awarded a Fulbright to teach modern dance at the National Dance Academy in Hungary. (He received another Fulbright to study the archives of a famous philosopher in Belgium in 1991.) In addition, he received an artist fellowship from the Foundation for Contemporary Performance Arts and a William Como Award from the New York Foundation for the Arts.

In a 2014 reflection, a Fordham alumnus praised Appels for showing him the beauty of dancing through his course called Lincoln Center Arts.

“I never considered dance to be very interesting, running the other way when friends would suggest going to the ballet … I now found myself discussing Balanchine, Paul Taylor, and Dance Theater of Harlem with anyone who would listen,” wrote Jason McDonald, who took the course as a Ph.D. student.

Appels was a thoughtful instructor who wanted his students to take away something meaningful from his classes, said Thomas O’Donnell, Ph.D., co-chair of Fordham’s comparative literature program and associate professor of English and medieval studies.

“Jon really wanted his students to become exposed to very different ideas. He was a very curious and open-minded person, and it seemed that his lessons as a result were full of that same spirit,” O’Donnell said. “He cared about his students very deeply. For every student that I would talk to him about, he had some story or insight about their biography and who they were. He really wanted to get to know the students so he could help them better.”

He loved speaking with students about their work over the phone, said LaMarche. Before their calls ended, he left them with a unique message.

“He ended almost every phone call with a student by saying, ‘Now keep that big smile,’ which I thought was so cute,” LaMarche said, chuckling. “You can’t see someone smile over the phone, but he would always say that to them.”

Appels was born on May 17, 1954, in Falfurrias, Texas. His father, Robert C. Robinson, was a sales executive for oil companies and a financial planner; his mother, Patricia Robinson, neé Hosley, was an elementary school teacher. When he was a child, his family frequently moved because of the nature of his father’s job, said LaMarche. He lived in Nigeria and Libya and later settled in California.

“He was exposed to a lot of different cultures as a youngster … He got his B.A. at Western Washington University at a college called Fairhaven College, which was a very experimental educational institution at that time,” said LaMarche. “That started his off-the grid educational experience.” 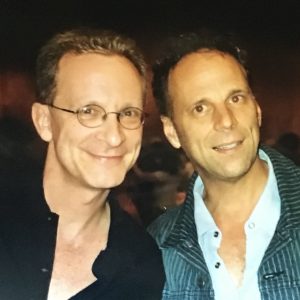 Outside of Fordham, he taught undergraduate and graduate students at Columbia University, Cornell University, Princeton University, Rutgers University, and his alma mater Western Washington University. He enjoyed yoga, pilates, gyrotonics, acupuncture, and other forms of Eastern medicine and healing. Instead of ironing his shirts and wearing a suit jacket like many professors, he preferred a loose and casual style, LaMarche said. He was a spiritual man who loved nature, especially walks through the woods and summers spent with LaMarche in Ithaca, where they swam in waterfalls, gorges, and lakes. He disliked technology, especially computers—in fact, he never owned one, said LaMarche, who managed his husband’s online accounts.

In addition to LaMarche, Appels is survived by his father, Robert; brother, Robert H. Robinson and his partner, Ilona Robinson; and his sister, Carol House, her husband Roger House, and their son Josiah. A memorial service will be held for Appels sometime early next year, said LaMarche.