skip to main content
Return to Fordham University
You are at:Home»University News»John Walsh, Quiet Stalwart of Psychology Department, Dies at 83 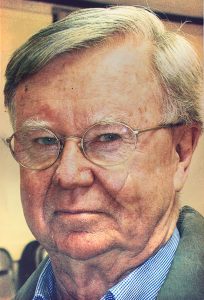 John F. Walsh, Ph.D., FCRH ’57, a Bronx native who set foot on the Rose Hill campus as an 18-year freshman and, except for a four-year absence, didn’t leave until 53 years later, died on Oct. 21 in Jenkintown, Pennsylvania, at age 83.

After earning an undergraduate degree at Fordham College at Rose Hill, Walsh went on to earn a Ph.D. in 1962 at Clark University. He wasn’t gone long though; he returned to his alma mater in 1961 as an instructor in the department of psychology. He would eventually be promoted to full professor in 1972, a position he held until he retired in 2006, and was named professor emeritus.

David Glenwick, Ph.D., a professor of psychology and longtime colleague, said Walsh would be missed.

“John was an extremely caring person with a great deal of integrity,” he said.

“Having been a Fordham undergraduate himself, he was a devoted member of the Fordham community and particularly committed to Fordham as a high-quality teaching institution, especially for undergraduate psychology students.”

An expert in the field of human behavior and statistics, Walsh came to be known as a steadying force within the department. In a 1981 Bene Merenti citation celebrating his 20th anniversary at Fordham, Walsh, who’d chaired the department for six years, was lauded for having “constantly demonstrated formidable organizational talent and an impressive capacity to find creative, workable solutions to ostensibly insoluble problems—all accomplished with forbearance, collegiality and unfailing humor.”

In 1994, after a six year hiatus, Fordham College at Rose Hill revived the tradition of bestowing Excellence in Teaching Awards upon faculty; Walsh was one of three honored for “achieving excellence in the fields of the humanities, social science, and natural and life science.”

Seven years later, his reputation as a “classroom magician,” able to transform difficult statistical formulae into readily understood concepts, was still intact; his 40-year Bene Merenti citation noted that while teaching statistics was difficult, “John has succeeded in getting his students to ‘learn their stuff.’”

Frederick J. Wertz, Ph.D., Interim Dean, Fordham College at Lincoln Center, and professor of psychology, was chairman of the department when Walsh retired.

“He contributed tremendously to the education of both undergraduate students at Fordham College at Rose Hill and the graduate students in the Graduate School of Arts and Sciences, most of all in the area of statistics and quantitative psychology.  He was also generous in service to the department and was a wonderful colleague,” he said.

Walsh wasn’t the only one with deep Fordham roots. Like Walsh, his wife, Nora Walsh, FCLC ’90, grew up in the Bronx neighborhood of Highbridge. The two attended the same grammar school and church, Sacred Heart. They didn’t connect until his junior year at Fordham though, when a mutual friend who was dating him told him that Nora could help him type up his papers. They hit it off, wed in 1958, and were married for 60 years. Nora eventually earned a degree—in social sciences—at Fordham. Two of their children, Christopher J. Walsh, GABELLI ’96, and Maura E. Walsh, FCRH ’97, followed suit. His grandson Christopher is currently a sophomore at Fordham College Rose Hill and his grandson James is a junior at the Fordham Prep. In addition, his son Timothy D. Walsh attended Loyola University Maryland and his daughter Meghan A. Walsh attended LeMoyne University, both Jesuit schools.

Nora Walsh said she was touched to meet former students at her husband’s funeral who had traveled to Scarsdale, where the couple lived until recently, from as far away as Boston to attend the service. It was evidence, she said, of the impact he had on their lives.

“He had so many things that he was interested in, his brain seemed like a storage room. It had so much in it, and he could pull pieces out at the drop of a hat. He was a gentle loving person, a generous man,” she said.

Memorial donations in Walsh’s honor may be made to the Bowery Missions, 432 Park Ave. South, New York NY 10016.