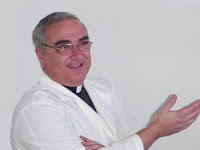 Episode 8 of “Jesuits in Conversation,” and interview with Nicholas D. Lombardi, S.J., airs on channel 10 at 8 p.m. on Thursday, Jan. 20, and on the web at www.fordham.edu/jescom/Conversations.shtml. Father Lombardi, the associate director of online services for the Francis and Ann Curran Center for American Catholic Studies is interviewed by Patrick Ryan, S.J., the Laurence J. McGinley Professor of Religion and Society at Fordham.

Fordham University’s Jesuit community aired the first in its 28-part Jesuits in Conversation series in November 2010, with a video interview of the late Charles Beirne, S.J.