skip to main content
Return to Fordham University
You are at:Home»University News»James P. McCabe, Who Revolutionized the Fordham Library System, Dies at 84
McCabe in front of the William D. Walsh Library during its construction phase in the 1990s. McCabe helped design, build, and furnish the new library, one of the largest in New York. Photos courtesy of the University archives
James “Jim” Patrick McCabe, Ph.D., Fordham’s former director of libraries who helped to modernize the University library system and develop the William D. Walsh Family Library at the Rose Hill campus, died peacefully in his sleep at the Pines at Poughkeepsie Center for Nursing and Rehabilitation on September 15, said his niece Jennifer Carlin. He was 84.

“Jim was a dedicated University librarian and administrator whose can-do spirit served the University well during a period of expansion and growth,” said Joseph M. McShane, S.J., president of Fordham. “He brought Fordham from an era of card catalogs to the full splendor of the information age. Thanks to his efforts, our students and faculty may draw from a far deeper well of information in pursuit of learning and scholarship.” 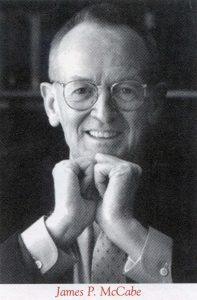 McCabe became the director of libraries on August 13, 1990. Until he retired in 2012, he helped Fordham libraries reach new heights—literally. He was an integral part of the design and construction process for the William D. Walsh Library, a five-floor modern Gothic style building that has housed more than 1,000,000 volumes since it was completed in 1997. The building was classified as the fourth largest library in New York in 2013 and featured in The New York Times.

“Jim McCabe’s strong vision for the future combined with his deep knowledge and respect for traditional practices made him the perfect person to lead the Fordham libraries into the 21st century. But Jim was much more than that,” said Linda LoSchiavo, director of libraries at Fordham, who succeeded McCabe. “A gentle, gracious man, with a quick sense of humor, he was esteemed and admired by his staff, his colleagues at Fordham, and by the academic library community as a whole. The University has lost a quiet hero, and those of us fortunate enough to work closely with him have lost a friend.”

“Jim McCabe came to Fordham at a crucial juncture, when he oversaw the complicated move to the new Walsh Library and facilitated the transition to electronic resources that we take for granted today,” Kowaleski said. “He was a kind and gentle man who led by example, taking his turn in the labor involved in moving the collection. He also went out of his way to meet and socialize with faculty, working to open up fruitful lines of communication between Fordham’s teachers and librarians.”

‘Let’s Do It’: A Librarian and Leader in the Digital Age

McCabe was a leader in the university library community during a time when technology began to dramatically change the ways libraries worked. At the beginning of the new millennium, he introduced the complete automation system to Fordham’s libraries, which included the electronic catalogue system and the library’s back-office operations. This helped librarians work more efficiently and gave students quicker access to resources. In addition, he helped promote one of the library’s most popular services, the electronic reserve room software. Similar to the BlackBoard Learn system currently used by faculty and staff, the electronic reserve room software was used to help faculty create course pages and upload resources for their students. 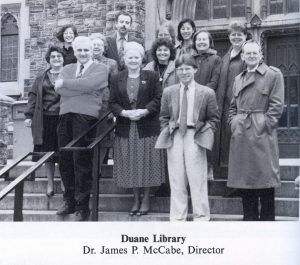 McCabe and his colleagues in front of Duane Library in 1992

“The immediate, enthusiastic acceptance of electronic reserves is proof that it is a program whose time had come. It is a fine example of how the Internet can make our lives and work a little easier, and save time and energy,” he wrote in a 2000 piece for Inside Fordham Libraries.

In addition, he served as a link between Fordham and New York Libraries in his role as president of two local library organizations. He served on the Metropolitan New York Library Council’s Board of Trustees, where he helped foster conversations about important library and information issues, and on the Historical Preservation Commission for Westfield, New Jersey, where he helped to preserve the town’s historical sites and landmarks.

McCabe was not only a librarian, but also an author. He wrote Critical Guide to Catholic Reference Books (Libraries Unlimited, 1971), a series of annotated entries on topics related to the Catholic Church, including liturgy, social sciences, and literature.

“[He brought] digital resources of bewildering variety to library users within and without our library buildings. He has done this while substantially increasing the size and scope of our print collections, improving staff morale, increasing the hours and quality of library service to library users, and winning the respect, admiration, and affection of the Fordham community,” read a citation in a 2010 convocation booklet that recognized 20 years of his service to Fordham. “Whenever he encounters an opportunity to provide a new service or improve an old one, his reaction has been, ‘let’s do it.’”

McCabe at the Walsh Library construction site in the 1990s

‘It Isn’t Raining in Our Hearts’

McCabe was born on May 24, 1937 in Philadelphia, Pennsylvania, to Felix and Josephine McCabe. His father was a lineman for a telephone company and his mother was a nurse. He graduated summa cum laude from Niagara University in 1963 and earned three graduate degrees at the University of Michigan: a master’s in English literature, a master’s in library science, and a doctorate. For more than two decades, he served as library director at Allentown College of St. Francis de Sales in Pennsylvania, now known as DeSales University, where he oversaw the conceptualization and construction of a new library facility. Right before his appointment to Fordham, he served as the acting library director for Muhlenberg-Cedar Crest Colleges Libraries in Pennsylvania. 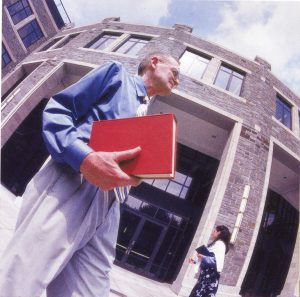 His friend for nearly 40 years, Romain Frugé, said McCabe was a beloved member of the theatre community at DeSales University, where he manned the lighting booths during shows and served as an academic mentor and confidant for students. McCabe was also a staunch supporter of students’ work. He flew to London and Japan to watch Frugé perform in several musicals, said Frugé. And no matter where he went, McCabe had a positive outlook on life.

“Whenever it was raining, Jim would say, ‘Well, it isn’t raining in our hearts,’” said Frugé, who was a student at DeSales University, where McCabe worked as library director. “He was always a real positive force.”

McCabe never had children of his own, but he was close to his four siblings and their children. For many years, he spearheaded an annual family picnic in Manhattan, said his niece Jennifer Carlin. He loved everything about the city, especially cheap tickets to Broadway shows, and he walked like a classic New Yorker at 10 miles per hour, said his nephew Felix Carroll. And he always appreciated the little things.

“He gave me a really great piece of advice when I was in my early 20s,” Carroll said. “I was moving all over the place, and I couldn’t settle on anything … He told me to stop and take delight in the world. We can be worried, but we’re supposed to find joy, too, and that’s found in everyday things.”

McCabe is survived by two siblings, Aileen McClure and John McCabe, and numerous nieces and nephews; he is predeceased by two siblings, Francis McCabe and Ann Carroll. A funeral Mass will be held on Sept. 24 at 11 a.m. at St. Ephrem Catholic Church located at 5400 Hulmeville Road, Bensalem, Pennsylvania, 19020. The Mass begins at 11 a.m., but family and friends are invited to gather at the church an hour earlier. Interment will follow at Resurrection Cemetery.

The funeral service will also be streamed, beginning at 10 a.m. on Sept. 24. To obtain the link to view the service, contact Jean Walsh, senior executive secretary at the Walsh Library, at ajewalsh@fordham.edu by Sept. 23 at 5 p.m., latest. You can view live or at your own convenience.

In lieu of flowers, donations in McCabe’s honor may be made to the book fund at Fordham University Library.