Some of Fordham’s top alumni shared their secrets to success with senior students and recent graduates at the President’s Council Kickoff Reception and Executive Leadership Series Mentoring Event at the Lincoln Center campus on Oct. 21.

The annual event is an opportunity for seasoned alumni to mentor their younger counterparts—both recent grads and students. The mentees included graduating seniors from all three colleges, including Founder’s Scholars, student-athletes, and first-generation college students.

This year’s reception was the first held in-person in two years due to the pandemic. Most of the mentors are members of the President’s Council, a select group of Fordham’s accomplished and committed alumni who fund key initiatives and provide mentorship and networking opportunities.

At the beginning of the evening, Joseph M. McShane, S.J, president of Fordham, thanked the alumni for mentoring their younger “sisters and brothers.”

“When a Fordham student has a champion in a law firm or a corporation or anywhere who is a Fordham graduate, that is powerful, and they know it. On top of that, they learn from you in ways that you don’t even know. They will watch you for wise clues. How do you treat people? How do you live the values of the institution?” Father McShane said. “They will learn from you. They will emulate you.”

In roundtable discussions paired with hors d’oeuvres and drinks in Lowenstein’s 12th-Floor Lounge, about two dozen alumni and parents shared career and life advice. They first considered their “cannonball moment”: a pivotal moment in their lives that shaped their professional journey. The phrase is taken from the life of St. Ignatius Loyola, founder of the Jesuits, whose own leg was shattered by a cannonball in the Battle of Pamplona 500 years ago. In his contemplative period of recovery, he read about the life of Jesus and focused on a new path. 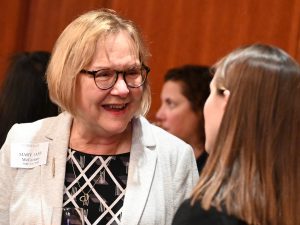 For Mary Jane McCartney, TMC ’69, her cannonball moment came in the early ’70s, when she was a young graduate with a mathematics degree who worked for Royal Dutch Shell. She learned that Con Edison had a new job opening—a much bigger role than her previous position. But she wasn’t discouraged. In 1980, she became Con Edison’s first female director of fuel supply.

“I was willing to put myself out there and try for a job that I never believed I would get,” said McCartney, who is a member of Fordham’s second graduating class of women. She added that that’s something women tend not to do, but should. “[Don’t think] ‘If there are 10 qualifications and I only have nine, I’m not going to apply.’ Nonsense.”

Halfway through the evening, the table conversations switched to life after the pandemic. The alumni considered the future of their industries and how students—especially the graduating seniors next to them—could best prepare to enter the job market.

Mark Smith, FCRH ’04, senior vice president of investments at Wells Fargo, told students about how millions of employees in the U.S. are reevaluating their lives and quitting their jobs, in light of the pandemic. He urged students to know what they want and to advocate for their values during interviews with potential employers, particularly with direct questions. 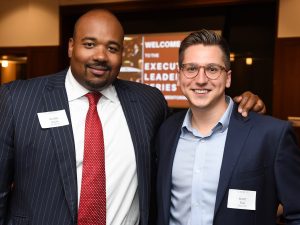 Mark Smith, FCRH ’04, and his past intern and now colleague, Bart Paul, FCLC ’20, who work together at Wells Fargo

Another mentor seated at the table, Rob Boller, FCRH ’99, a lawyer who runs the New York office of Barnes & Thornburg LLP, a large national firm, added that current graduating seniors have a unique advantage in the job market.

“When you’re finishing up college, you just want to get your first job. You want to hear ‘yes.’ It is very important to get a job and start building up your resume, but to Mark’s point, businesses are in flux right now,” Boller said to the students. “Folks looking for jobs have a lot more leverage than they used to. I think you guys are in a better position than we were, coming out of college, in terms of negotiating.”

Pandemic or no pandemic, the graduating seniors have a long road ahead, said Smith.

“The ugly word in networking is ‘work.’ You’ve got to do research on the people you want to network with. Try to get them on Zoom. Some of them aren’t going to answer. Some of them are going to say, ‘Call me in a month,’” Smith said. “It’s not easy, and it doesn’t get easier. Until you have a job, it’s a full-time job getting a job.” 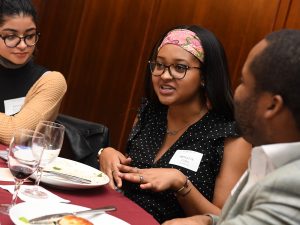 At the end of the night, the graduating seniors reflected on what they learned. Brigitte Gibbs, FCRH ’22, a psychology major in the CSTEP program, talked about some advice from an alumna and retiree from the corporate world.

“She said, ‘If you don’t have it figured out right now, it’s OK. You’ll figure it out eventually.’ That was something that really stuck with me,” Gibbs said. “I want to go to medical school, and that’s a straightforward plan, for the most part. But I’ve wondered, am I cut out for this? When she said that, I was like, OK … Everything’s going to work itself out.”

*At this event, guests were eating and drinking. The University requires all members of the campus community to wear masks while indoors. The only exceptions to masking requirements are for individuals alone in a room, or in their residence hall apartment or bedroom, and while eating or drinking.