skip to main content
Return to Fordham University
You are at:Home»Inside Fordham»Lectures and Events»Investing in Diversity: “The American Dream Corrected”
More than 175 students attended the Global Diversity and Inclusion Conference.
On April 4, Fordham’s Office of Career Services and Office of Multicultural Affairs held their annual Global Diversity and Inclusion Conference at the McGinley Center on the Rose Hill campus. The date also happened to mark the 50th anniversary of the assassination of the Rev. Martin Luther King Jr., as was noted by Joseph M. McShane, S.J., president of Fordham. 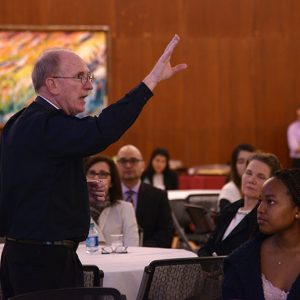 Indeed, many of the participants at the conference, which included students, business executives, and government leaders, sought to continue that correction by expanding the definition of diversity to go beyond race and ethnicity in what Father McShane called a “very conflicted” nation.

“I reflect with you on the day that we have this gathering, because when we look back and listen with fresh hearts and ears to what he said, we touch base with his dream, which is the American dream corrected,” said Father McShane. “This is an inflection moment in our history once again,” he said.

Expanding the Definition of Diversity

Martha Jackson, assistant commissioner at the New York City Mayor’s Office for People with Disabilities, stressed the importance of making students aware of their role in effecting positive change.

“The students are our future and if we have any chance of getting it right, it’s with them,” she said. “They’re going to be the ones who create the change in the systems and make diversity first in everybody’s mind.”

“We need to develop skills to care for each other and that has to go to the workforce,” said Aponte. 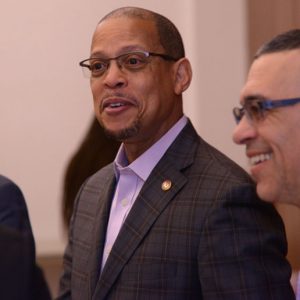 Stephen J. Casey, a managing director at BNP Paribas in North America, noted that diversity isn’t always easily perceived. He said diversity includes people who have disabilities that are “invisible,” like those on the autism spectrum.

“You have people dealing with mental health issues and it’s not always apparent,” he said.

He added that the unemployment rate for people with disabilities in the New York area stands at an “appalling” 77 percent.

“Something needs to be done,” he said. “People with disabilities have amazing talents and a number of firms are actively seeking them out.”

Inclusion as a Business Strategy

“Diversity is who we are and inclusion is how we work together,” he said. “Diversity is a business imperative. But, to get the brightest and the best you have to invest.”

As such, he said that any major organization, such as a university, needs to create an environment that “celebrates differences and similarities,” adding that just as in business, investment at Fordham is key to reaching the University’s goals and objectives.

“If the university is looking at diverse students who they can potentially bring to this organization, it requires an investment,” he said. “When we look at the Faith and Hope campaign for example, we’ll need to look at how that scholarship money will be disbursed so we can capture all elements of that gorgeous mosaic.”

Liying Wei, a first-year student from New Jersey, was one of more than 175 students attending the event. She said her family moved to the U.S. from China when she was four years old. The main reason she came to Fordham was to live in New York City where “there’s people from all over the world.”

“Even though Fordham can seem to be its own little bubble inside the Bronx, I was really surprised to see how many different cultures and international students we have here,” she said. “We need to continue opening up scholarship opportunities for people from all sorts of backgrounds, especially for the disadvantaged.”

Haixiao Wang, a Gabelli master’s candidate, spoke about diversity opportunities at NGOs and the United Nations.