In a lounge overlooking the Lincoln Center for the Performing Arts, Robert Grimes, SJ, dean of Fordham College at Lincoln Center, told his global audience that the view “represents so much of what this city has to offer.” 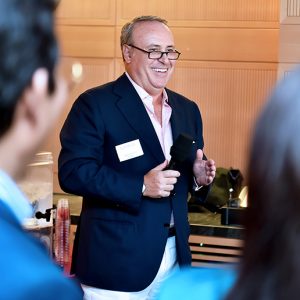 Donna Rapaccioli, PhD, dean of the Gabelli School of Business, and Maura Mast, PhD, dean of Fordham College at Rose Hill, joined Father Grimes to welcome the parents of the largest international class to date. Rapaccioli, a mother of three, said she was well versed in the college move-in day.

“I remember it was a was a proud moment, but one that was filled with anxiety,” she said. “But Fordham has an ecosystem that will ensure that your child has the support they need.”

For her part, Mast said she could relate to the students, as this was her first public event as the new dean at Rose Hill. She is the first woman to fill the role since the college’s inception in 1841.

“I chose to come to Fordham for many of the same reasons that your children did,” she said, adding that she appreciated Fordham’s emphasis on the undergraduate experience. “Your sons and daughters will broaden their world socially, culturally, academically, and I hope spiritually.”

The event was a new initiative for the Parents’ Leadership Council that offered moms and dads their own orientation to Fordham. Parents went on a tour of Rose Hill, attended the reception, and a later were welcomed at an elegant dinner. The following day, Isabelle Frank, dean of the School of Professional and Continuing Studies, joined Midori Yamamura, PhD, lecturer in art, to lead parents on a tour at the Metropolitan Museum of Art.

“Move-in day is important because we leave our kids to the University,” said Andrea Mennillo, the international chair of the Parents’ Leadership Council. “Fordham is a great community, and families are a part of that.”

Eric and Anna Pichardo, of Tijuana, Mexico, arrived at the reception with bags from a Uniqlo, the Japanese clothing store. Earlier that day they were in Queens at Costco and Target, getting dorm room supplies for their daughter, Erica, a freshman at Fordham College at Lincoln Center.

“She was calling us all day, saying ‘I need this, I forgot this, and I need that,’” Eric said with a laugh.

He said he was calm about his daughter’s transition, being that the parents have been schooling their daughters in California since the girls were in first grade. Anna was a bit more apprehensive. She was worried that Erica might not like the food.

No such problem with incoming freshman Chenyang Fu from Shanghai, China, said her mother Amy Liu. 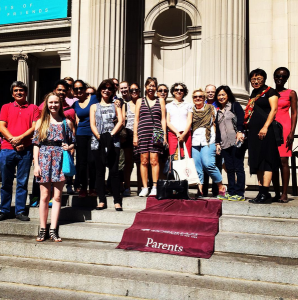 At the Met with Isabelle Frank and Midori Yamamura.

Some of the international students toured the campus last winter. But many were encountering it for the first time, as was the case with freshman Jake Chen. His parents, Joanne and Peter Chen, said that he had just finished his national service in Singapore.

“We’ve raised our kids to be as international as possible,” said Peter. “Jake is very capable, so his adjusting is the least of my worries.”

With this year’s crop of new international students hailing from Saudi Arabia to Spain, from Monaco to Mexico, and from Italy to India, the parents exhibited the mix of pride and anxiety that Rapaccioli described.

But the Global Transitions program for parents, which offered them three days to get to know fellow international parents, did offer a measure of calm, said Trygve Kjolseth, who arrived with his son Thomas from Norway.

“When we walked around campus this morning I thought, ‘This is a really good group, we should get together again,’” he said. “Our families seem to have some common denominators, and that gives me a good feeling about the community for the kids.”