skip to main content
Return to Fordham University
You are at:Home»Colleges and Schools»Graduate School of Arts and Sciences»In Workshops, Graduate Students Polish Their Teaching Skills
Digital media was the subject of a two-hour long workshop and discussion held at the Rose Hill campus between Ph.D. students and professors.

Photo by Patrick VerelGarret McDonald’s faith in classroom technology was almost undone by an experiment related to the Civil War.

When he was an undergraduate student at Texas Tech, McDonald, now a third-year history Ph.D. candidate at Fordham, was tasked with imagining how a person living through America’s bloodiest conflict would have shared their thoughts on Twitter about, say, the Battle of Gettysburg. From the very beginning, the project was probably doomed, he noted, as it only counted for 5% of students’ grades, making it harder for them to feel invested in it.

“We also realized after our first series of tweets that some of us didn’t do well tweeting, and others had a hard time stepping into their character. The first few tweets weren’t very interesting or well put together, so we sort of pooled them into a private chat, where only a select group of people could see them,” he said.

“At that point, not only were the students not interested, it had no clear identification with the outside world. Then the question was, what was the point? That entirely turned me off for a long time to the idea of tech in the classroom.”

As he embarks on teaching his first class at Fordham this fall, McDonald is much less reticent about using digital tools in the classroom, thanks in part to “Should I Use Digital Media in My Classroom?” a two-hour workshop co-hosted by the Preparing Future Faculty program at the Graduate School of Arts and Sciences (GSAS), the Graduate Student Association’s Digital Humanities Group, and the Fordham Digital Humanities Consortium.

The workshop, which was held in April at the Rose Hill campus, was attended by graduate students studying the humanities, and featured presentations by Grace Shen, Ph.D., associate professor of history; Ralph Vacca, Ph.D., assistant professor of communication and media studies; Katherina Fostano, visual arts coordinator in the department of Art History; and Barbara Mundy, Ph.D., professor of art history.

Vacca focused on digital tools such as MaxQDA, which allow students to pull and analyze social media posts, chart music data, and scrape sites for content. Mundy and Fostano showed how they use online projects to help students interpret imagery, such as Mundy’s digital project, Vistas: Visual Culture in Spanish America, 1520-1820. And Shen talked about the ways students can integrate the social reading platform Perusall and the multimedia book platform Scalar into their classwork.

The Preparing Future Faculty program was started two years ago by Lillian Cicerchia, a philosophy Ph.D. candidate and GSAS higher education leadership fellow. Cicerchia said the goal is to give Ph.D. students—many of whom will teach—tools that will help them in the job market upon graduation.

“Graduate students often don’t know when they first start teaching what lengths they have to go to articulate and develop their own teaching philosophy,” Cicerchia said.

“You can have success by articulating what it is that you’re doing and why you’re doing it, and not just replicating the patterns you’ve seen before and how you were educated. It actually requires some conscious work.”

Cicerchia, who facilitated all six of the workshops, said the digital pedagogy meeting gave her plenty of ideas that she plans to use for her classes in the future. She learned about the social annotation reading program Perusall, for instance, which gives students the ability to write discussion questions, comment on content, and see each other’s comments and questions.

Something to Be Proud Of

Another attendee at the digital pedagogy workshop was Patrick Debrosse, who like McDonald is pursuing a Ph.D. in history, with a focus on Medieval Studies. Debrosse presented at Fordham’s International Symposium on Digital Scholarship in June; he said workshops like it made it clear that while technology is great for showcasing and storing research, what’s most exciting is the way it can make research itself collaborative. Digital projects can also live on in the public sphere, he said, and can thus burnish a students’ resumes.

“These tools provide an opportunity for student to invest in the work they’re doing. It’s not just something they’re receiving, but something they can be proud of, and they’ve achieved, working with a professor instead of just receiving something from them,” he said.

“You also have to think about what the after effects of a digital project are, and couple that with very simple, do-it-yourself approaches where you don’t hire an expensive software engineer to do the latest and greatest thing, because that’s going to fall apart within a decade or so. Instead, you should use the tools that you know are going to be durable, and figure out how to do the digital work yourself.”

Using technology to make research widely available to the public was another topic widely discussed in the technology workshop. McDonald said that when he teaches future history course, he’s considering assigning students a Wikipedia page to research and update, so it reflects how historians understand events and people’s roles in history.

“Having students reinvigorate common bases of knowledge on the internet with good research can really be a benefit for everyone,” he said. 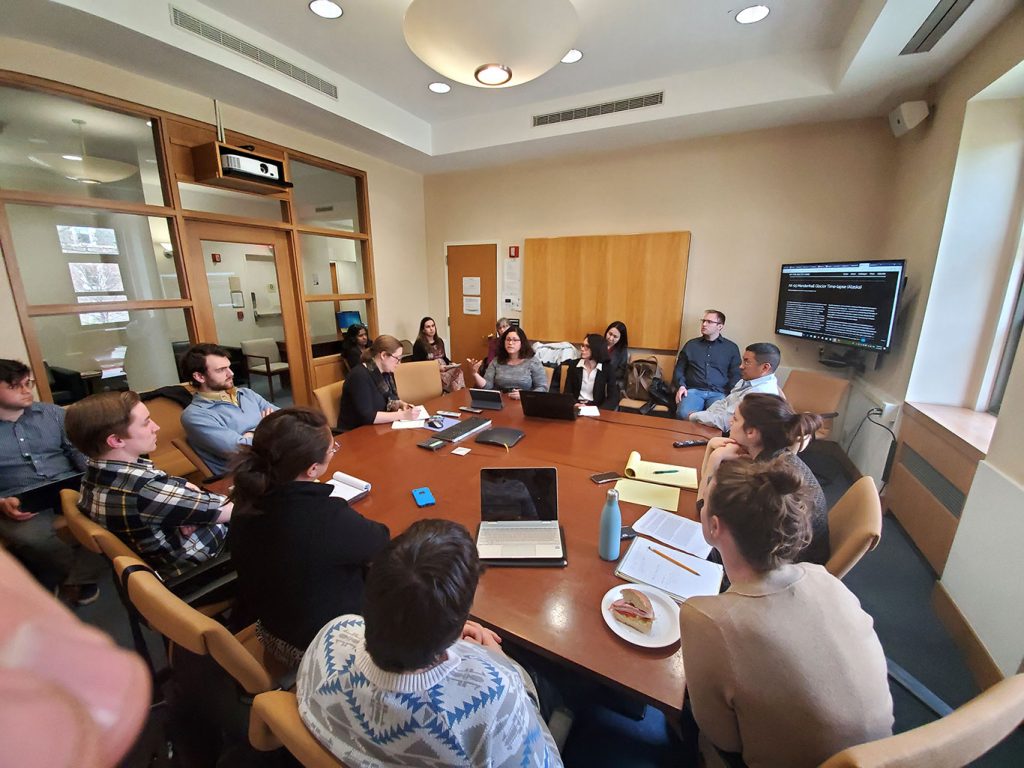 The digital media workshop was one of six devoted to improving specific competencies that students need to be better teachers.
Photo by Patrick Verel