skip to main content
Return to Fordham University
You are at:Home»University News»In New Class, Addressing Climate Change and Food Insecurity
Julio Farach-Varona and Isimar Lopez, NYREACH Nutritional Coordinator at Essen Health Care, at the La Familia Verde market in Highbridge.
Photo by Patrick Verel
We hear regularly about how climate change is impacting the weather. What’s perhaps less obvious is that it is also affecting the food we eat.

In 2015, the U.S. Department of Agriculture warned in a report that the progress that has been made on global food security is likely to take a hit because of climate change. Rising temperatures, the report said, are expected to cause “local availability limitations, price increases, interrupted transport conduits, and diminished food safety.”

That’s why, on a chilly Wednesday morning in October, Fordham student Julio Farach-Varona found himself working at a farmers’ market in the parking lot of a senior living facility in the South Bronx. 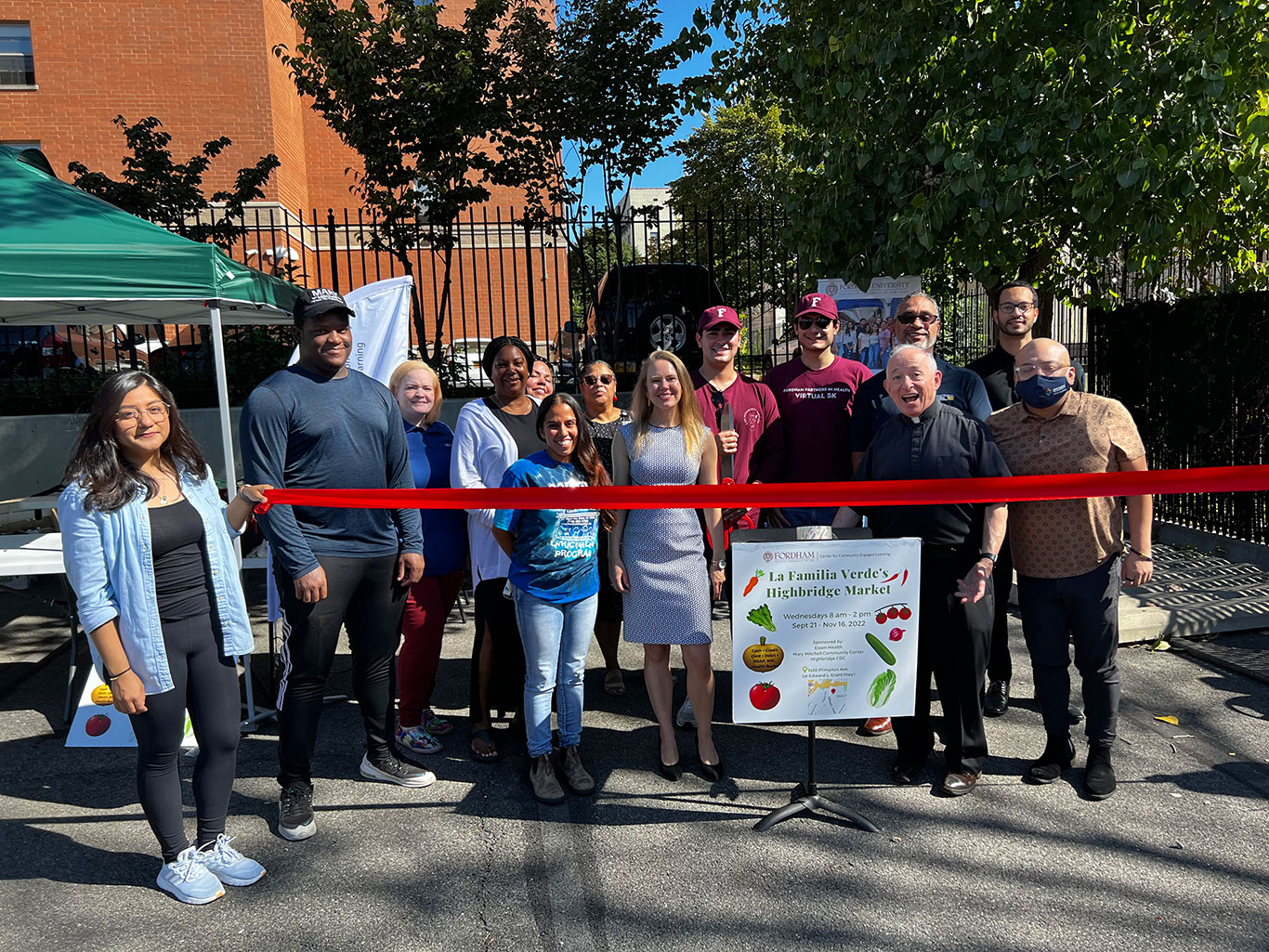 The opening of the market on Sept. 21 featured a blessing bestowed by Monsignor Donald Sakano, president and chair of the Highbridge Community Development Corporation.
Photo by Adam Bermudez

Classwork on the Streets of the Bronx

Farach-Varona, a senior at Fordham College at Rose Hill who is from Atlanta, is one of 16 students enrolled in Ecology and Economics of Food Systems. The brand-new course is co-taught by Dawn Fariello, Ph.D., lecturer in biology, and Andrew Simons, Ph.D., associate professor of economics.

Farach-Varona’s job that morning, along with four other undergraduates, was to help transform a parking lot in Highbridge, a neighborhood just south of the Cross Bronx Expressway, into a distribution hub for fresh, affordably priced produce. Students cleaned and sorted produce from three upstate farms, helped customers, and tidied up at the conclusion of the market, which ran for five hours a week for six weeks this fall.

At the market, and another one students worked at in East Tremont run by La Familia Verde, residents use government-issued Supplemental Nutrition Assistance Program (SNAP) and Farmers Market Nutrition Program coupons to make purchases, and because they’re supporting local producers, whose shorter travel times make their carbon footprints smaller, they’re helping in a small way to fight climate change.

“It’s kind of cool to see how you can apply what you’re learning in a classroom to the real world outside the gates of Fordham,” said Farach-Varona. 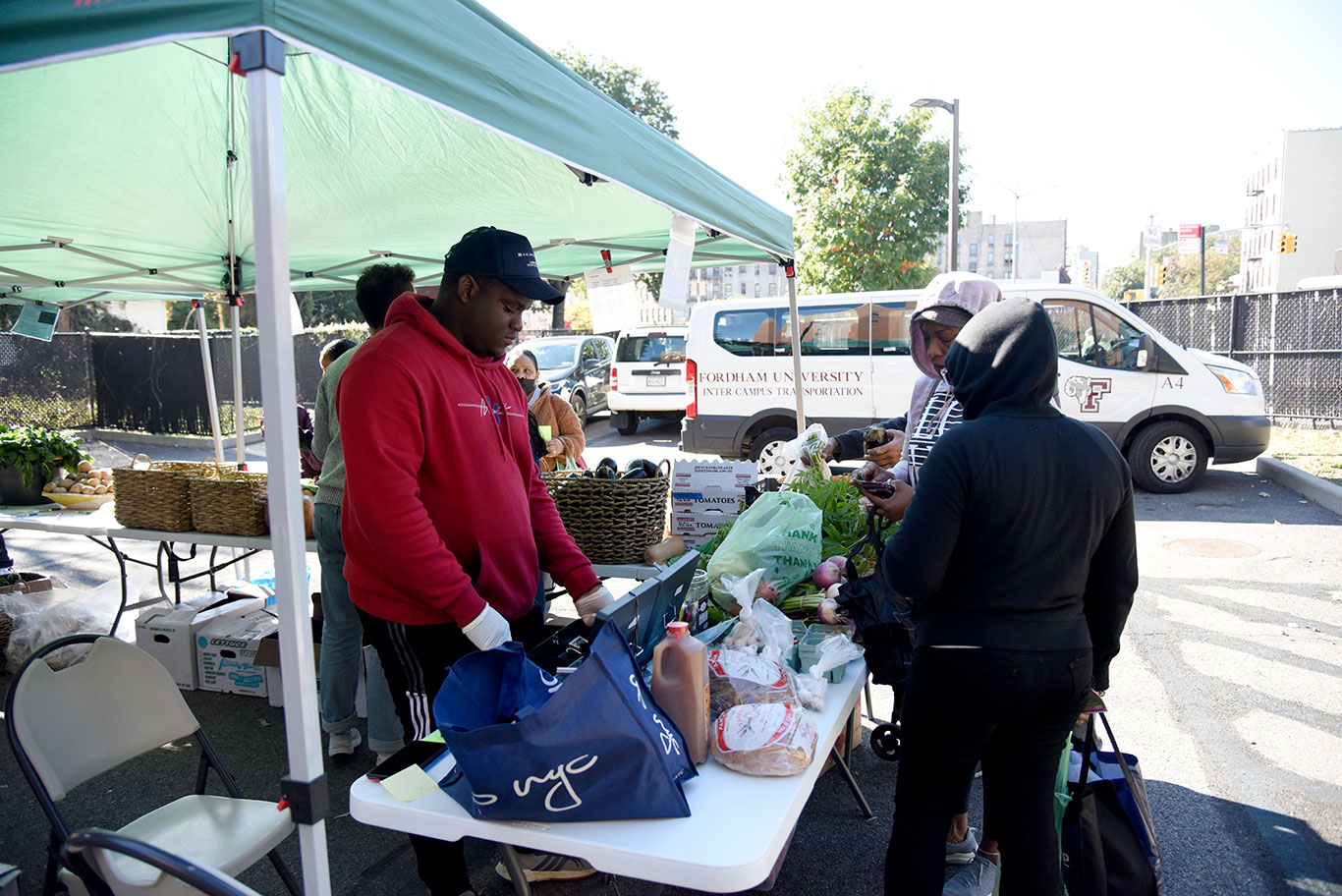 The market is located in the parking lot of a senior housing complex in the Bronx neighborhood of Highbridge. Photo by Patrick Verel

It was exactly the kind of outside-the-classroom experience he hoped to get when he toured the economics department his senior year in high school. His interest is in developmental economics, which is focused on the greater good for the greatest number of people, so the course piqued his interest. In addition to the community experience, students read Charles Mann’s The Wizard and the Prophet (Knopf, 2018), which gave them an understanding of food systems as a whole.

Addressing Climate Change: A Directive from the Pope

The class is a small part of Fordham’s larger efforts to address the effects of climate change. This February, in response to a call from Pope Francis, the offices of mission integration and ministry, the provost, and facilities management came together and tasked CCEL with responding to Laudato Si’ Action, a call that the Vatican issued as a follow-up to Pope Francis’ 2015 encyclical on climate change titled Laudato Si’.

After convening a task force for six months, the center published its Laudato Si’ Action Plan, joining 67 other universities around the world in doing so. The document is a seven-year plan with goals that touch on everything from hosting an annual sustainability conference and conducting a comprehensive study of waste management on campus to establishing a sustainability panel at Fordham’s International Conference on Cyber Security.

Complementing the Climate-Action Efforts of the Facilities Department

Fordham has also answered the call to reduce its carbon footprint in terms of its facilities. In 2007, the University was a founding signatory to the NYC Carbon Challenge, initially committing to reducing its greenhouse gas emissions by 30% over the next decade. Fordham extended its commitment to the challenge in 2017 by pledging a 40% reduction by 2030, and every year, progress, such as the 2019 installment of solar panels on the Rose Hill parking garage, is detailed in a climate action plan annual report.

Julie Gafney, Ph.D., director of the Center for Community Engaged Learning, said that the goals of Fordham’s Laudato Si’ plan are meant to complement and broaden the scope of continuous work done under the supervision of Marco Valera, vice president for facilities, to improve Fordham’s physical plant.

“We’ll be working really closely together on the ongoing infrastructure and facilities work, but we know that the work of sustainability goes beyond that,” she said.

“We’re an institution of higher education, so we need to look at how we’re teaching classes, the research projects that faculty are taking on, and our relationship with community partners, industry partners, and elected officials.” 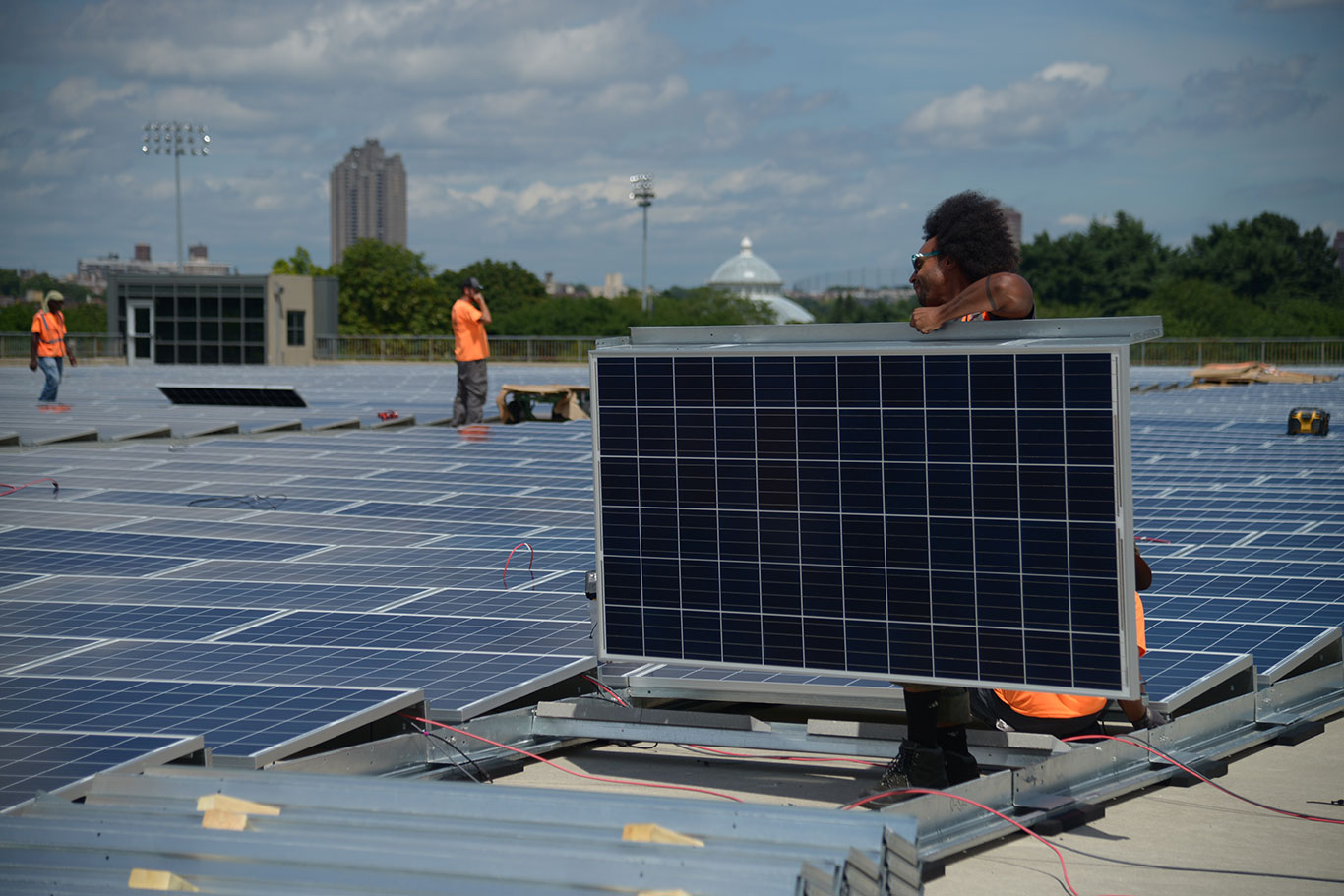 A worker installs a solar panel on the roof of the Rose Hill parking garage in 2019. Photo by Patrick Verel

Fariello created the Ecology and Economics of Food Systems course last May after Fordham’s provost put out a request for an interdisciplinary STEM course with a Center for Community Engaged Learning (CCEL) connection. CCEL-related courses, which have community service built into the syllabus, have grown dramatically in number at Fordham since the first seven debuted in 2014; there are 90 this year. The course emphasizes food insecurity in the first half, and sustainability in the second. With a $1,500, five-year grant from CCEL, they were also able to make the connection to the market. Like the students in the course, both Fariello and Simons each have their own experiences with food; Fariello grew up with food insecurity, and Simons worked from 2008 to 2011 as director of programs for the aid organization Food for the Hungry in Addas Ababa, Ethiopia.

“I find that when students come to Fordham, they come from different demographics and show a very varied understanding of food systems,” Fariello said.

“So, it’s really important that when we’re talking about food systems and social, economic, and environmental sustainability, students get to see that. It’s not just learning it, but physically interacting with those sorts of differences.”

The food insecurity section required students to work 15 hours at the farmer’s market. The sustainability section featured a trip to Stone Barns, a non-profit farm and educational center in Pocantico Hills, New York, that has showcased sustainable food production practices since 2003. The two extremes are important to understand, as climate change is expected to exacerbate the divide in the future. 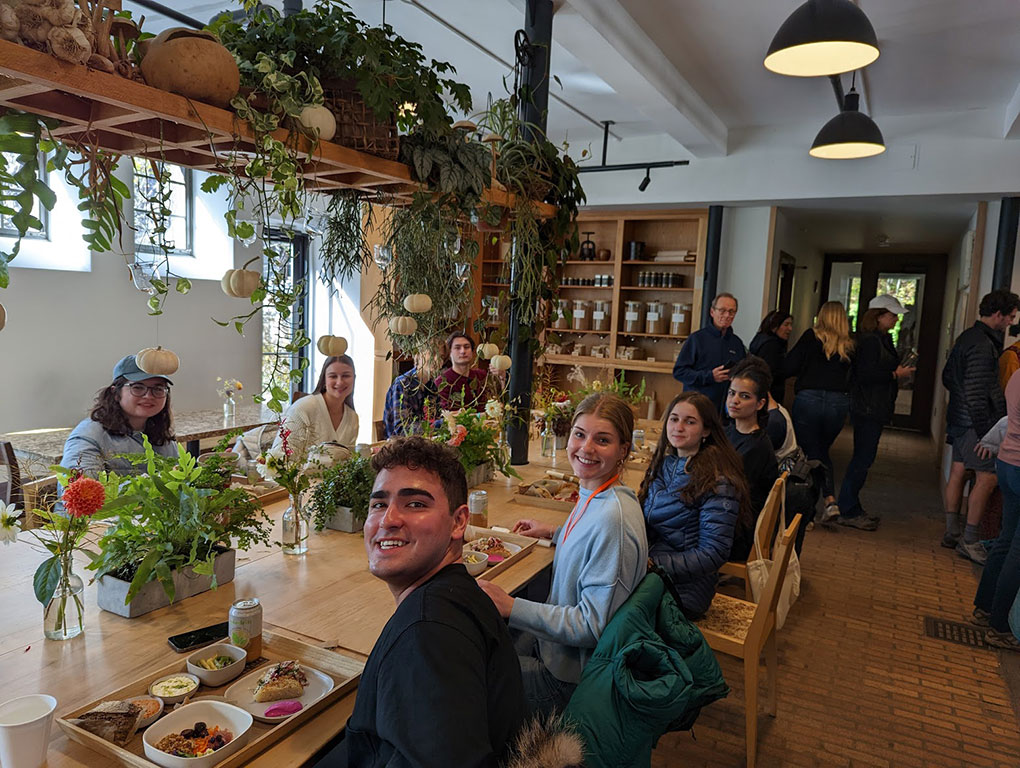 The class visited Stone Barns as part of a section devoted to sustainability.
Photo by Dawn Fariello

The Complexities of Natural Resources Management

Fariello and Simons note that while there is a debate currently raging about whether it’s possible to both feed every person on the planet while also doing it sustainably, their goal is not to take sides but to help students better understand the contours of the complex challenge. If you want to increase food production, you can do so by cutting down forests and converting them to farmland. But then you remove a vital ally in the fight to slow climate change, as trees store carbon.

“Students are very worried about sustainability. They’re worried in some sense that the world is ending because of climate change,” said Simons.

“So they’re very interested to hear things like, ‘If you set up farming this way, you’re going take more land away from forests. What if technology can change, and get more yield per unit of land, then you wouldn’t necessarily need to take out a forest?”

Working with the Community

CCEL is a good place to oversee a wildly ambitious project, both because it is part of Fordham’s Department of Mission Integration and Ministry and because the center can connect the University to outside partners.

“We can’t do climate justice and environmental justice alone. We’re part of an ecosystem here in New York, nationally, and internationally,” she said.

The Ecology and Economics of Food Systems course is a great example of the kind of synergistic approach that CCEL is striving for, she said. The market in East Tremont has been open for over a decade, but the one in Highbridge is brand new, and opening it required collaboration between the La Familia Verde, the Mary Mitchell Family and Youth Center, Fordham, the Highbridge Community Development Corporation, Essen Health, and Catholic Charities. At Fordham, a great deal of the coordination was overseen by Surey Miranda-Alarcon, director of campus and community engagement at CCEL.

“Not one of these organizations could have done this on their own, and truly, we couldn’t have done it without the capacity that the students add,” said Gafney.

“One of the things I love about this project is, it is ongoing and sustainable. It’s not something we’re doing just for the learning value, although it does have tremendous learning value.” 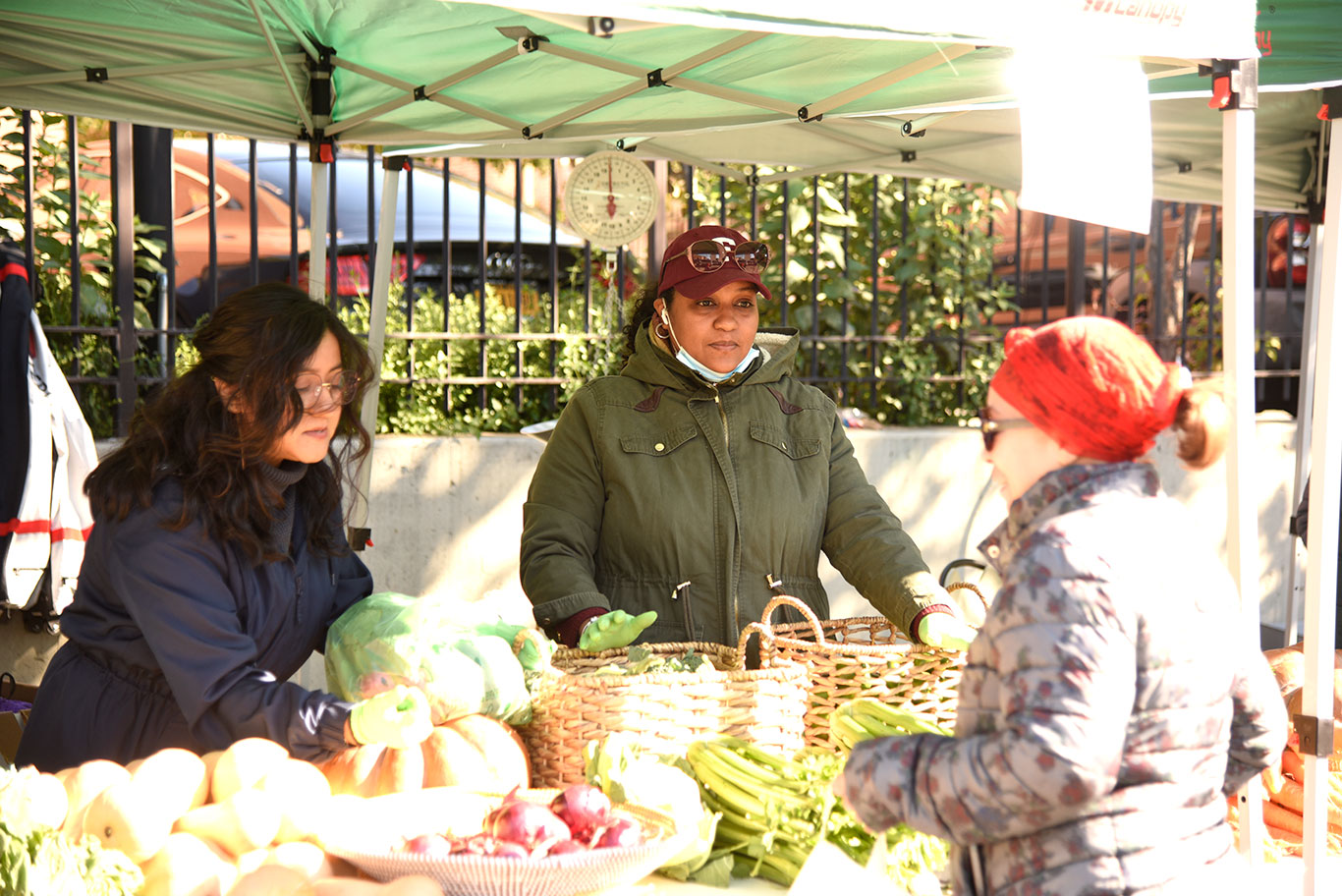 Maria Rodriguez, assistant director of the Center for Community Engaged Learning, helps customers at the market.
Photo by Patrick Verel

Aleyna Rodriguez, executive director of the Mary Mitchell Family and Youth Center, said the market fulfills two essential goals. One is bringing healthy food to those who either can’t afford it or can’t easily travel the hilly neighborhood of Highbridge to get it. The other is supporting the farmers at Rottkamps, Trinity, and Rising Roots, the upstate farms where the produce is grown.

“We try to keep everything affordable for community members, but when we hear from someone that something is marked too high, we do provide them with insight on the importance of supporting local farmers,” she said.

Rodriguez was effusive in her praise for the Fordham students.

“Even if they don’t speak Spanish, they’re able to connect with the community residents; they’re happy to see them,” she said. “And the community can see that Fordham is here.”

For Rafael Melgarejo, 82, a native of the Dominican Republic who has lived with his wife in Highbridge for 17 years, and in the Mary Mitchell Houses for the last three, his visit to the farmer’s market on Oct. 19 was his third. He was as excited to see his neighbors as he was to buy vegetables.

“There’s not too many chemicals in it. You grow it, and it’s healthier. The main thing is the will that you people have to help others, the needy ones,” he said of all the community groups involved. “That’s the main thing. For that, may God bless you.”

Farach-Varona likewise appreciated the sense of community that morning. His mother hails from Puerto Rico, so he grew up speaking Spanish. He found himself chatting with the mostly elderly customers about which vegetables would go well in sofrito—a mix of aromatics that is the base of many Latin American dishes.

“It was nice to talk to people on a deeper level rather than, ‘How many pumpkins do you want, or how many apples do you want?’” he said.

“It’s kind of the equivalent of working out. You just feel nice about it afterward, because you’ve interacted with so many people, and you see the smile on people’s faces when they get the produce, and they know it’s good food.” 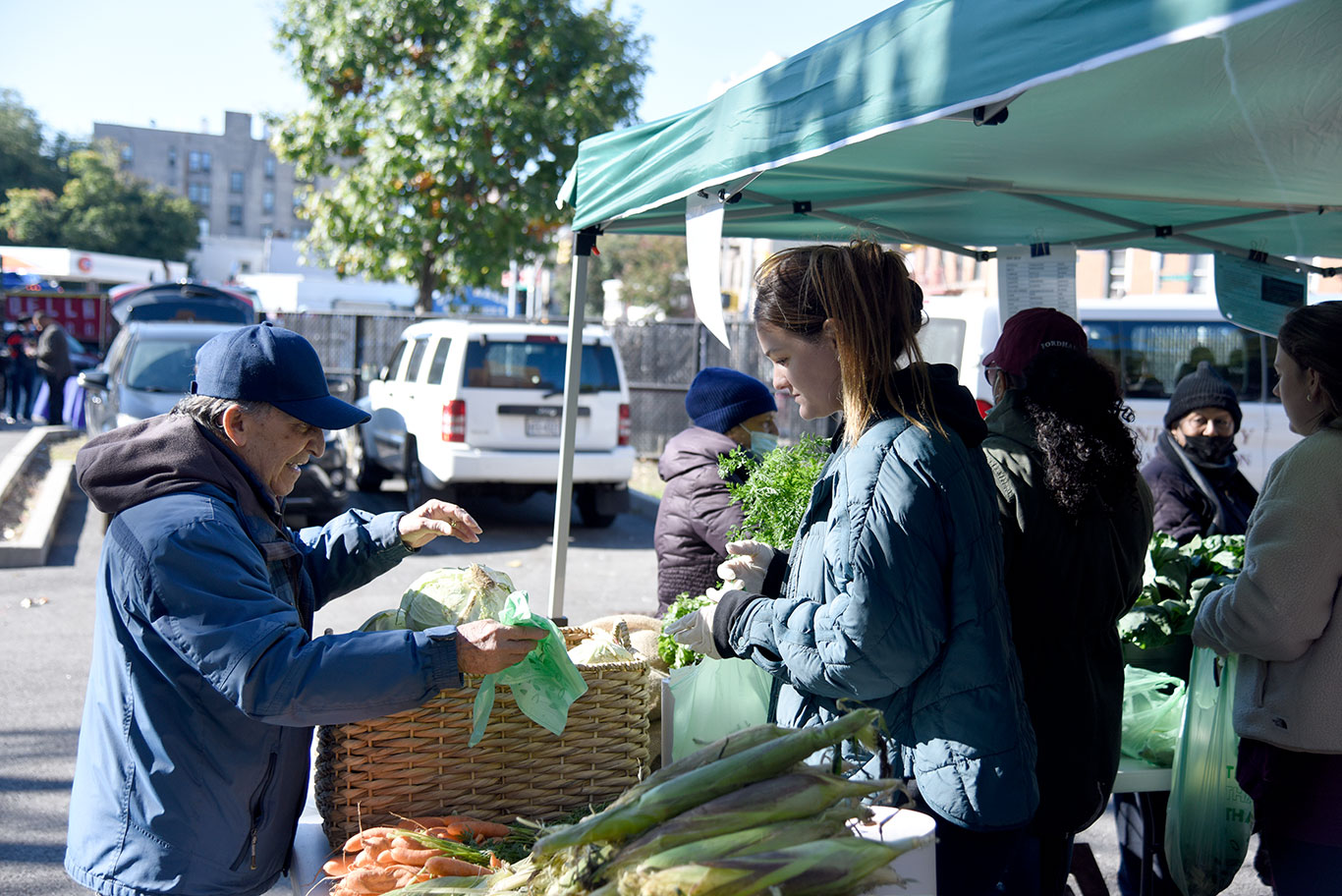