skip to main content
Return to Fordham University
You are at:Home»University News»In New Campus Center, Ample Space for Relaxing, Recharging, and Reconnecting
Expanded lounging, dining, and fitness facilities are some of the highlights of the new campus center. Renderings courtesy of HLW International LLP
More space. Calming, relaxing, and inspiring space. Space for meeting friends and colleagues. Any way you look at it, the new campus center under construction at the Rose Hill campus will be a radically different space when it is completed in 2025.

That’s one of the key takeaways of architectural renderings of the center that lead architect HLW International LLP released this month. The center, which will join a brand new, 71,000-square-foot, four-level structure together with the existing McGinley Center, the Rose Hill Gym, and the Lombardi Center, will dramatically increase the amenities available for students, faculty, and staff on campus.

Construction and renovations will take place in two phases. In the first phase, a new structure will be erected in front of the existing McGinley Center. This new addition is estimated to cost $85 million. Once that building is finished in August 2021, the two will be joined together by an arcade that will also extend over the space adjacent to the Rose Hill Gym. The next phase of work will renovate the interior spaces of the existing McGinley Center.

A Space Where All Are Welcome 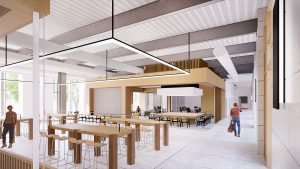 A rendering of the new campus center’s first-floor lounge.

The first phase of construction will bring online several areas that will enhance the quality of life for students and the entire campus community. The first floor will be dominated by a 9,500-square-foot lounge that spans nearly the entire floor and will be outfitted with seating arrangements catering to groups and individuals.

HLW managing partner John Gering said the firm’s charge is to design a space that feels like a “home away from home” and encourages commuter students and resident students to comingle in new ways. The layouts of the first floor of Hughes Hall and the Starbucks in Dealy Hall offer a good template, he said.

“Everyone’s in there, hanging out. There are different types of seating arrangements and different heights of seating,” he said.

The second floor of the new addition will feature expanded offices dedicated to Career Services, Campus Ministry, and the Center for Community Engaged Learning. The third floor will have a large, versatile space specifically designed for meetings and special events.

A Focus on Sports and Fitness

Getting your sweat on will be the name of the game on the basement level of the unified center, in a space that is double that of the current fitness center. A new, state-of-the-art 20,000-square-foot fitness center will be open to all students, faculty, and staff. Fordham Athletics will gain 16,000 square feet of space; a modern strength and conditioning center will occupy 10,000 square feet of that space, while the rest will be devoted to offices and meeting space, as well as a refueling station where student-athletes can grab nutritious food and drinks after training. There will also be “Grab and Go”-style retail facilities and vending machines on the first floor and the gym, for quick access. 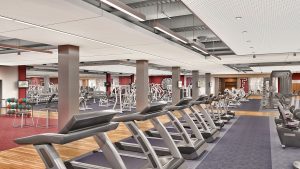 A rendering of the fitness center that will occupy the cellar level of the campus center.

Fordham’s Director of Intercollegiate Athletics David Roach noted that moving into the campus center will free up sorely needed space in other areas of Fordham’s athletics facilities. The current strength and conditioning center underneath the grandstand at Coffey Field will become an outdoor sports medicine room, for instance.

“By getting additional space in the new student center, it frees up other spaces in the athletics footprint and we can provide things and do things that are great for our student-athletes,” he said.

“Anything that’s a plus for the University and addresses the needs of students is good for student-athletes and helps us in recruiting great students to Fordham.”

In the second phase of construction, whose schedule is still being developed, the existing Marketplace dining area will be completely upgraded, reimagined, and redesigned. Chief among the additions being considered are separate food preparation stations where students will be able to see their meals as they are prepared, and an expansion of menu choices to offer a wide variety of student favorites and accommodate special preferences and dietary and nutritional needs. There will also be a new stand-alone retail dining space across from the large lounge, providing food and beverages for those who want to hang out or are on their way to meetings and events. 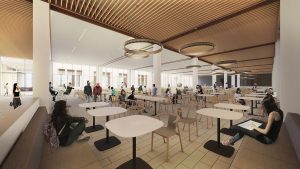 A rendering of the new dining area.

Renovations will also be made in the second phase to provide bigger and better student club and organization space, additional meeting rooms, and an expansion of the current ballroom to a capacity of 800. There will also be expanded and improved space for the Office of Multicultural Affairs and Student Involvement, as well as student groups that access these offices for support and socializing.

A Bridge Between New and Old

The glass canopy between the gym and the new structure is meant to form a bridge between it and the century-old gym.

“When you’re looking at the building at night, it’s going to be very well illuminated, along with the tower. It creates a void between the new and the old in a way that it doesn’t look like they’re competing,” Gering said.

The campus center is the third major project that HLW has undertaken for Fordham in recent years; the firm designed the renovation of the sixth floor of the Lowenstein Center in 2018 and the $38 million renovation of Hughes Hall in 2013.

Valera predicted that the visual effect of the new arcade will be especially pronounced for the space between the existing McGinley Center and the Lombardi Center to the north.

“It’s a very dull space, and with this new design we’ll really invigorate the space between the buildings bringing the whole complex together,” he said. “Activity flows to the gym for games and to Lombardi for events.”

Gering said designers spent a lot of time incorporating details that make Rose Hill distinct. When the second-floor ballroom is renovated, for instance, Gering said the entrance doors and the front will incorporate elements inspired by and similar in character to the north entrance door of Cunniffe House.

“What we’ve done in the design of the campus center is take those details, be they the patterning of the curbing or the stone, or the pocket areas, and bring it inside. There’ll be a sense of, ‘hmmm, this kind of looks familiar,’” he said.

The exterior of the addition, with its ground-to-ceiling stone columns and large glass windows, is likewise a modern interpretation of Rose Hill’s traditional gothic architecture.

Valera said construction will be a delicate dance, as it will take place on a site that is still very much in use. The canopy of the arcade, for instance, may need to be constructed partly at night to minimize disruption.

“The issue is, how can we undertake the necessary construction work and still keep the buildings in operation? There will be some impact, there’s no way around it. There will be noise, but the goal will be to minimize that as much as possible,” he said.

Gering said the goal is to make the center a focus of not only activity but also renewal. Natural light is a key part of wellness, he said, which is why the glass gallery is so important. Stairs and ramps will also be strategically placed within the interior of the space, to encourage students to get in more steps.

“Where there are stairs, there’s usually a function next to it, which will encourage students to use the stairs to get to the function, rather than just slip into an elevator,” he said.

Some of the features meant to lend an aura of calmness, like a green wall that will be cultivated with live ivy and moss on the side of the gym, will be obvious, while others will be subtler. As an example, the glass cladding on both the tower adjacent to the main entrance and the multifunction room on the third floor will be fritted glass, which has a slightly opaque finish that reduces glare.

The building is designed to LEED Silver level and follows the energy efficiency standard known as passive house. This means features such as triple glazed windows (most skyscrapers only have single or double glazing); automatic lighting controls; recycled materials; and in a first for the Rose Hill campus, heat recovery mechanical ventilation wheels, which reuse the building’s heat in cooler months.