But when the 71,000-square-foot, four-story addition to the McGinley Center officially opens today, Feb. 1, it will introduce to the Fordham community a radically different sort of space, filled with places to relax, recharge, and connect.

Get Your Sweat On 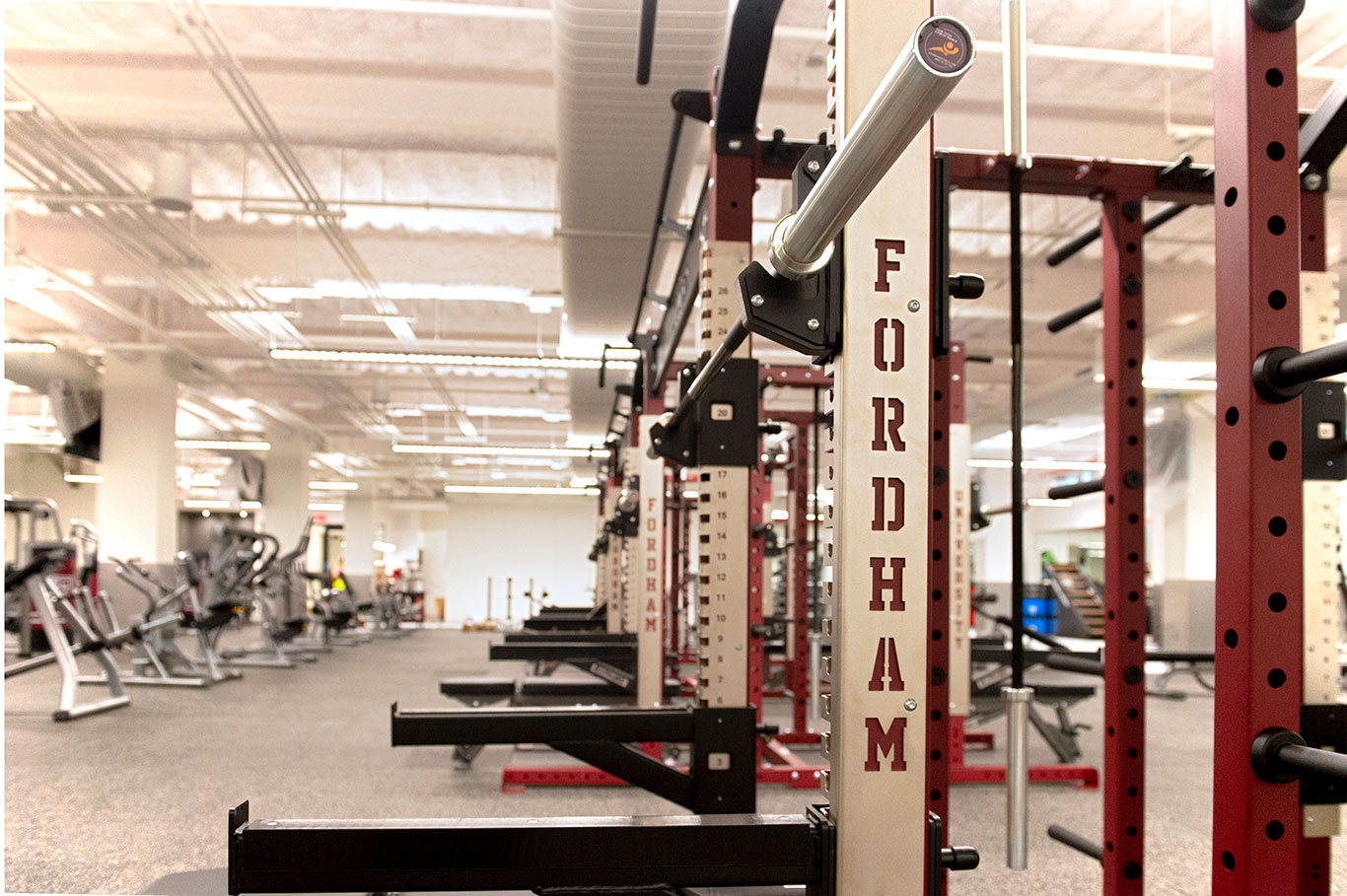 One of the highlights of this new building addition will be the expanded fitness center, which at 20,000 square feet occupies the lower level of both the new building addition and the existing McGinley Center. The brand new, brightly lit space, which is illuminated by both overhead lighting and sunlight from ceiling windows facing the front of the building, is dedicated to 100 pieces of state-of-the-art weight-training equipment. The existing space will continue to be used for cardio equipment, assuring shorter wait times. One of the newest pieces of equipment is a climbing simulator known as a Jacob’s Ladder. (The fitness center is currently operating at reduced capacity due to COVID-19 regulations.) 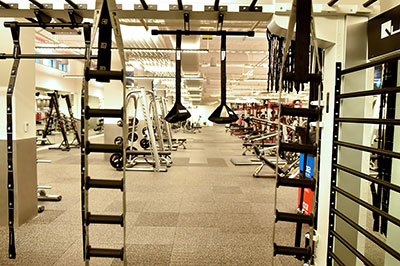 The fitness center features new machines, such a Jacob’s Ladder, and touches from the past, such as preserved sections of the original McGinley Center.

Eagle-eyed visitors heading to a newly offered yoga session in one of the two new classrooms might notice that the arches of the original McGinley Center have been left as unfinished concrete, not painted white like the rest of the wall. It’s a small, subtle touch meant to acknowledge the past, said Larry Peifer, the lead designer for architecture firm HLW International LLP. A similar sensibility influenced the choice of the new addition’s Corinthian granite façade, which is the same material on the outside of the Rose Hill Gym next door.

“We’ve kind of remixed Fordham’s architectural palate. We took these materials you see elsewhere, whether its Corinthian granite, limestone terrazzo, oak, or bronze, sampled them, and used them in a new way,” he said.

A Home Away from Home 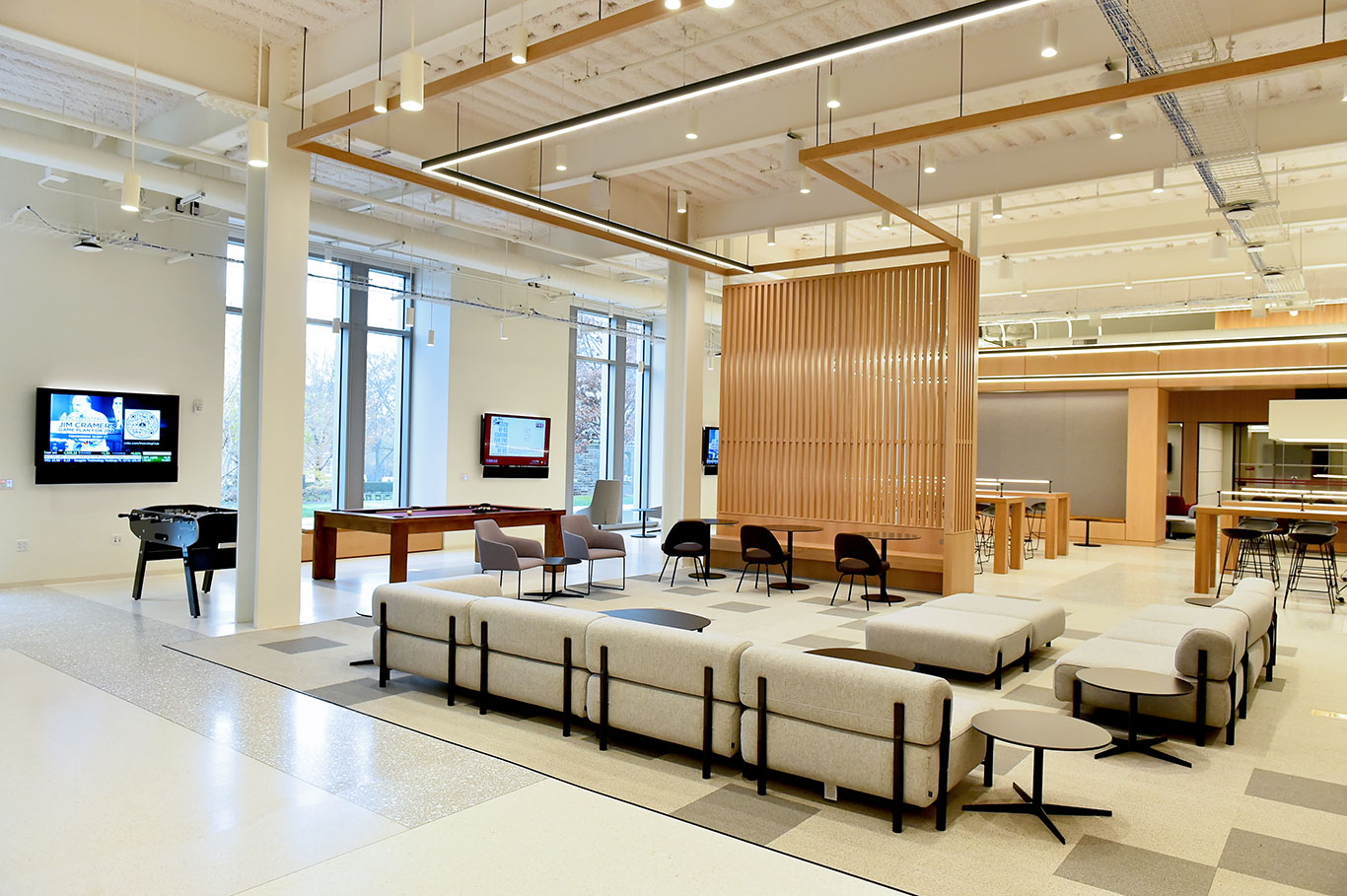 Boasting 17-foot ceilings, the lounge is an airy, semi-industrial space, with an unfinished concrete ceiling and exposed wiring above. The furnishings offer a mix of practicality and fun; sitting upon the terrazzo floor are tables, chairs, couches, a foosball table, and a pool table. Further on, a table large enough for a gathering of 16 is sectioned off by a dropdown ceiling; beyond that are private, glass-enclosed meeting rooms. 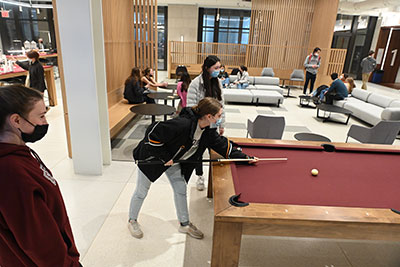 Students were given a sneak preview of the lounge in December.

John P Gering, managing partner for HLW, said the goal for the 9,500-square-foot lounge has always been to make it feel like a place where resident and commuter students alike can mingle and relax.

“It feels less like a classroom environment. It’s very informal, there are lots of touchpoints for laptops and things of that nature,” he said.

The gallery, a multi-level glass-covered space linking together the addition with the existing McGinley Center, is open to the addition now. After the third phase of construction is complete, the walls will come down, and a newly refurbished 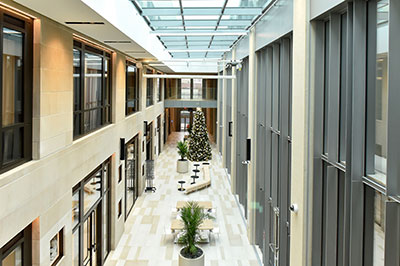 A view of the gallery from one of the two walkways connecting the new addition to the existing McGinley Center, in December.

marketplace dining facility replacing the existing dining space will be seamlessly connected to the other spaces.

Its defining characteristic is natural light, which streams down over the two overhead walkways connecting the second floors of the new building addition and McGinley, past the 20-foot retractable movie screen hanging from the ceiling, and onto the floor and walls, where the stone engravings of the Stations of the Cross are embedded. At night, the engravings will be illuminated. 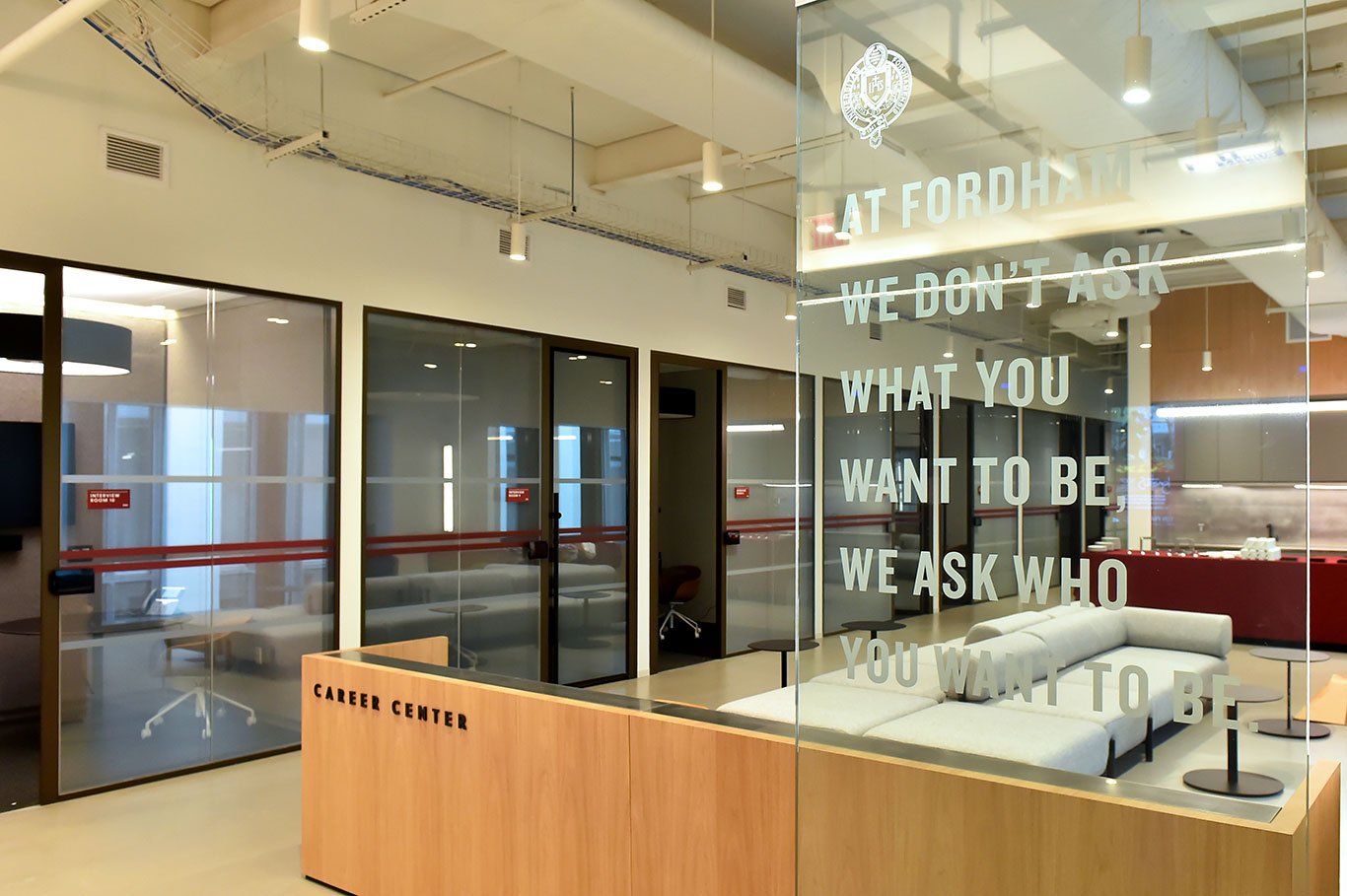 “I want to create a career center for cura personalis. This is all about mind, body, and spirit as it relates to how you find your pathway in the world,” said Annette McLaughlin.

The second floor is shared by the expanded offices of the Career Center, Campus Ministry, and the Center for Community Engaged Learning.

The new Career Center space features a lounge with a rough-hewn ceiling similar to the student lounge that’s bathed in light from windows in the front of the building. Also included in the suite are a pantry and 10 interview rooms outfitted with noise dampening panels and electronic glass walls that can be turned opaque with a light switch. Career services director Annette McLaughlin said in a 2020 interview that it’s her intention that the department is “a destination, not a checklist,” for students.

“I want to create a career center for cura personalis. This is all about mind, body, and spirit as it relates to how you find your pathway in the world,” she said. 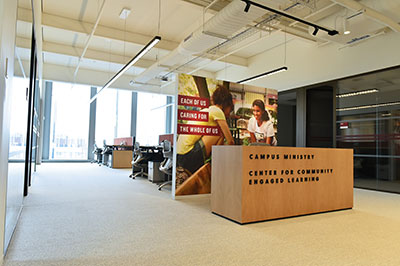 The offices of Campus Ministry share a floor with the Career Center, on the second floor.

Next door is a hub for students’ quest for deeper meaning in their lives. In addition to offices, the Campus Ministry and the Center for Community Engaged Learning feature two reflection rooms, a room with a widescreen suitable for conferences, and several smaller spaces available for gatherings.

John Cecero, S.J., vice president for mission integration and ministry, said he’s excited to bring together two departments within the division that had previously been in separate spaces.

“There’s much more common space for people to use, and I think that will foster collaboration both between these two departments and with others within the University. That is a major goal for us,” he said.

A New Vista for a New Era 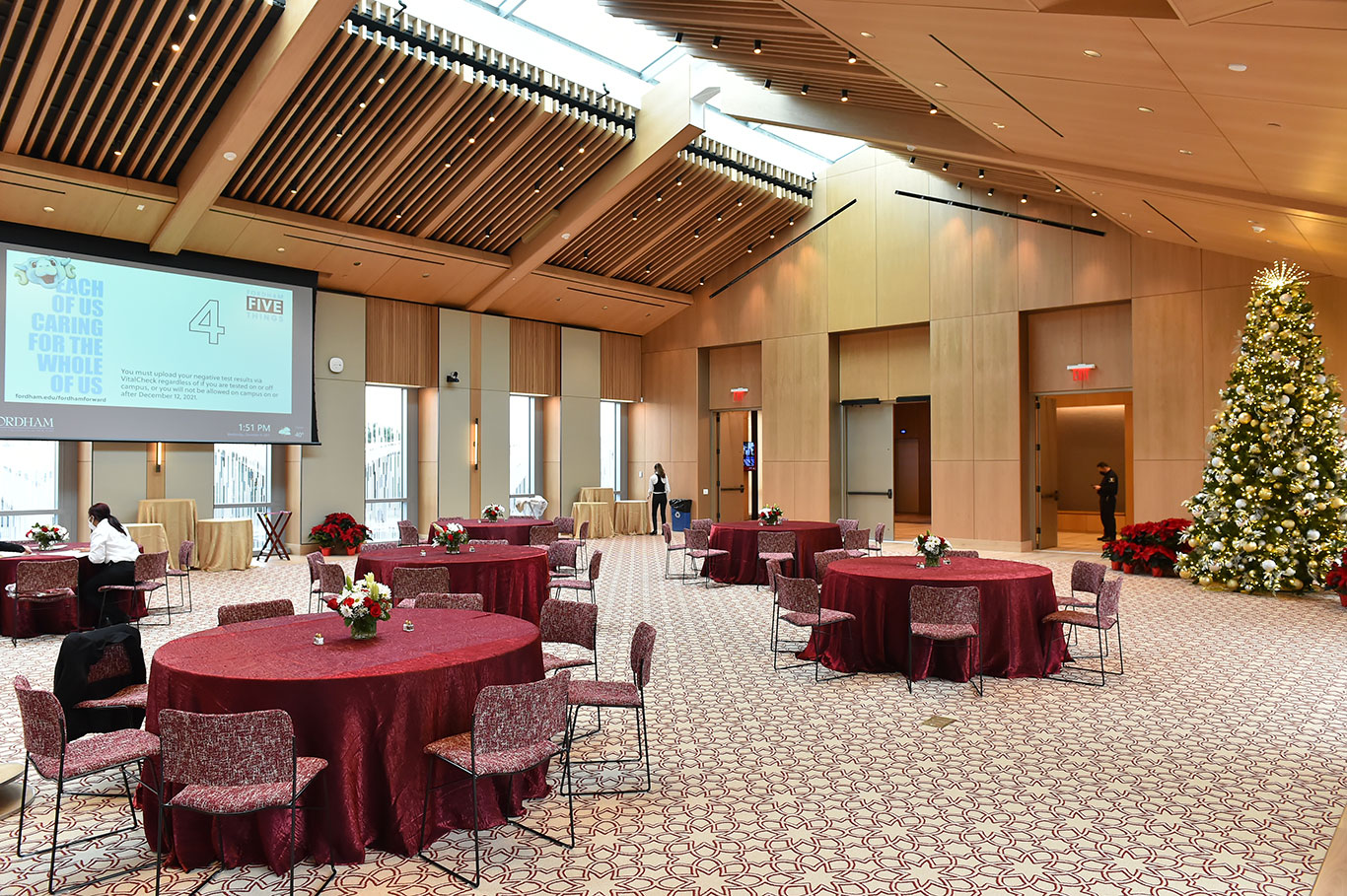 The multipurpose space on the top floor can accommodate nearly 200 people in the main space, and 147 in a smaller space.

Arguably the most breathtaking view is from the top floor, where the 28-foot ceiling is open to the sky like the gallery next to it. The 4,390-square-foot multipurpose space also reflects Fordham’s Catholic identity, with the Stations of the Cross occupying a central place on the back wall. The views from the top floor—the New York Botanical Garden to the north, Bahoshy Field to the west, and Hughes Hall and Edwards Parade to the south—give a new perspective to a familiar locale. Embedded in the wooden drop-down ceiling are acoustic panels, audiovisual equipment, and darkening shades that can be easily deployed for presentations. 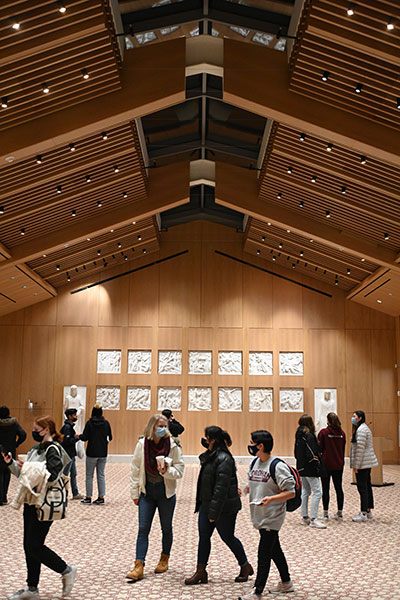 The Stations of the Cross are prominently displayed on the back wall of the multipurpose space, reflecting Fordham’s Jesuit identity.

Gering said the space, which can accommodate as many as 196 people in the main room and 147 in another, smaller room, is part of the firm’s dedication to the neo-Gothic aesthetic of the Rose Hill campus. Traditional gothic buildings are built with a portal entry and a main entry next to a tower that leads to a large aisle connecting to an altar, he said. This will be the case when a glass arcade between the new building addition and the Rose Hill Gym is completed in the second phase of construction.

“As you enter the building, you enter next to a tower, which is a beacon on campus. Then you walk through the arcade, which is similar to the aisle in Gothic architecture, and rather than walking to an altar or chapel, you proceed up to the next level, which is this grand board room and multifunction room,” he said.

“This is shifting the heart of the campus. The idea is that it is truly a campus center that brings everyone together with amenities, gathering places, and wellness programs and spaces that respond to that. It’ll be the new landmark of the university.”

The new building addition is the first of three phases that the center will undergo as part of a radical transformation that will culminate in 2025. When finished, the entire project will reflect Fordham’s history while giving visitors a modern space to convene and relax.

“If it’s going to be a building that really feels like the University and is taking the University someplace new—but not someplace that it doesn’t recognize—it has to have a certain spirit and a poetic weight that feels contemporary,” Gering said.

“Fordham has such a strong history and rich personality; we didn’t want anything to feel like it was foreign.” 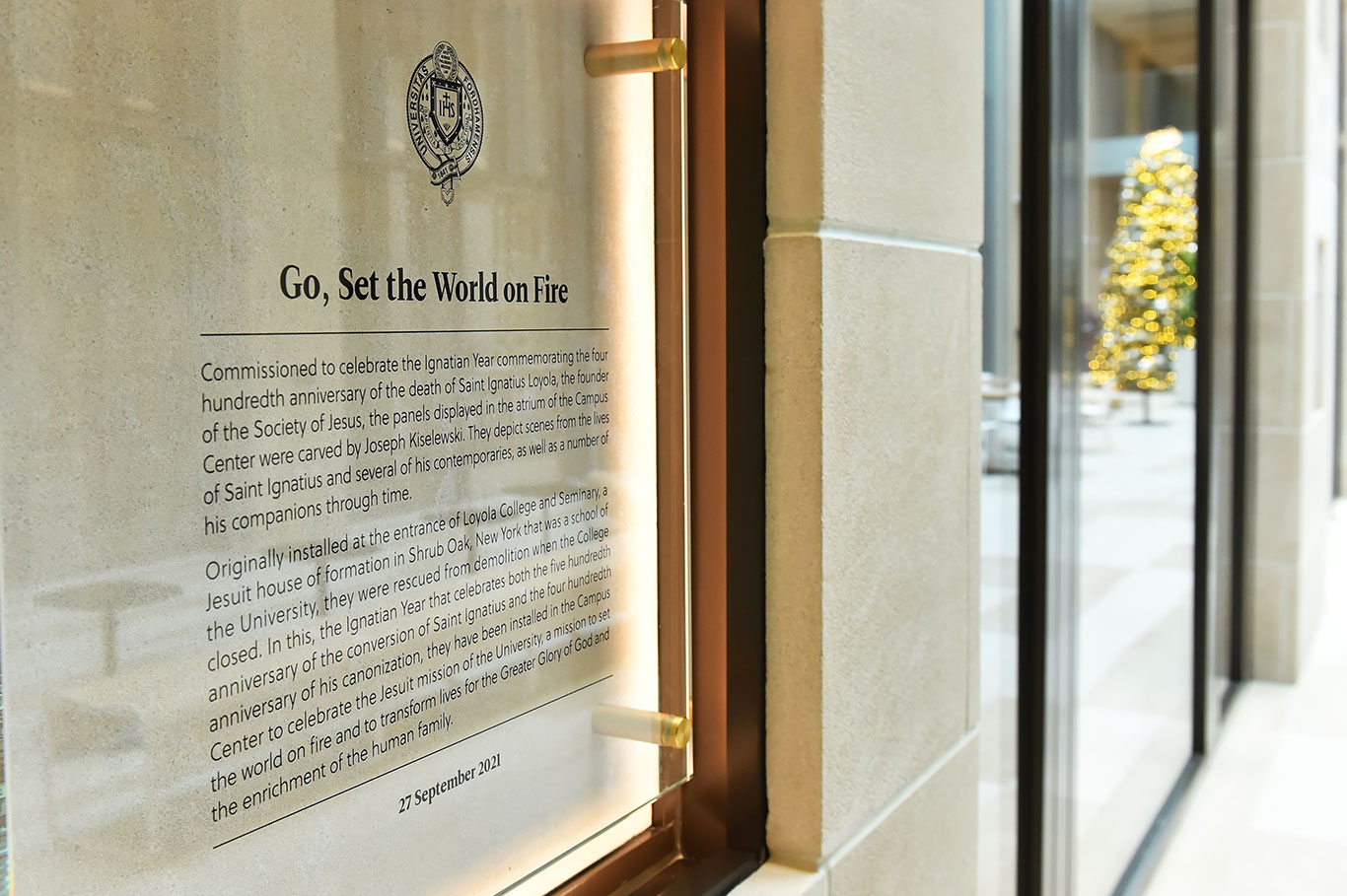 The ground floor of the gallery.