skip to main content
Return to Fordham University
You are at:Home»Inside Fordham»Lectures and Events»In Moving Testimony, Gay Catholics Reiterate Their Faith in the Church
Event photos by Dana Maxson
Amidst celebrations surrounding Pride month, a June 26 panel of LGBTQ+ Catholics reminded an audience of about 100 that prejudice and violence still confront their communities around the globe. The panel, sponsored by Fordham’s Department of Theology and the Church of St. Francis Xavier, honored the 50th anniversary of the Stonewall uprising with stark reminders that violence and isolation still threaten LGBTQ+ Catholics globally, but their faith often remains steadfast.

Each of the evening’s panelists came from countries where Catholics are the majority. All said they wished to hear more from their country’s church leadership that explicitly condemns such prejudice.

Parishioners from the Church of St. Francis Xavier in the Corrigan Conference Center

Bearing Witness for Others 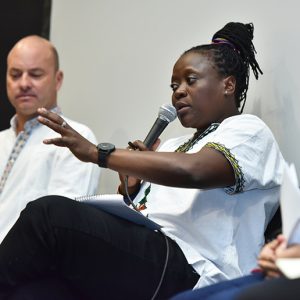 SSenfuka Joanita Warry, executive director of Freedom and Roam Uganda, said that she felt obligated to tell the story of others rather than her own, since she had the opportunity to travel abroad while most of her lesbian compatriots were denied visas.

“As I look out into the crowd I will count the number of women, because it is an issue in the Catholic church that women are always at the back seat,” she said. “If we keep away from issues our voices won’t be heard, but every time we appear our voices will be heard.

She told the story of her partner, who was forced into a marriage that produced three children. Her partner divorced the husband and began dating Warry. The two have been together for seven years. While Warry helps raise the children, she admitted that it’s virtually impossible for her to attend school events or show them affection in public, for fear of being blackmailed. She said that despite their discretions, her partner’s ex-husband went to the children’s schools and spoke of their lesbian relationship to the teachers. She said it’s not an uncommon tactic to use the children in such a way. 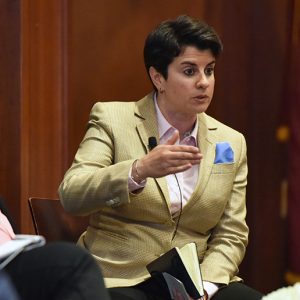 Her partner now counsels such children. She mentioned the case of a child of a lesbian woman who was outed at the family’s Catholic church. The young boy suffered a breakdown. In a third case a woman was beaten by her husband after it was discovered she was a lesbian. She said she founded Freedom and Roam Uganda as a refuge.

“I started this club for people who never wanted to run away from the church but to stay with the church,” she said. “I also believe in the fact that we are created in the image of God.”

Brother Argel Tuason, Obl, O.S.B., who chairs the Spirituality and Faith Development Committee of the Global Network of Rainbow Catholics, is a Benedictine Oblate of the Monastery Without Walls. He spoke of growing up in the Philippines and feeling a sense of community in the Catholic church that he felt he could not find elsewhere. Yet, he also recalled a painful episode of attempted forced conversation in the guise of an exorcism, in which he was pressured to renounce his sexuality. 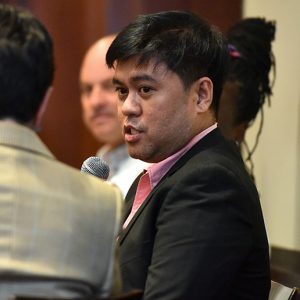 Brother Tuason said eventually he found solace through a “contemplative path” and in reading the work of John McNeill, S.J., a Jesuit priest who had championed gay rights and who had taught at Fordham. Father McNeill wrote the 1976 book “The Church and the Homosexual,” for which he was interviewed by Tom Brokaw, among many other national media figures. Together with Father Mychal Judge (the FDNY chaplain who identified as gay and died in 9/11), Father McNeill established an AIDS ministry in Harlem. According to his obituary in The New York Times, though the Vatican initially found the book to be theologically sound, Father McNeill eventually found himself sparring with then-Cardinal Joseph Ratzinger (who became Pope Benedict), and was eventually forced from the Society of Jesus in 1986.

Choking back tears, Brother Tuason said the evening’s event was held on “sacred ground” since Father McNeill had taught here. He recalled returning repeatedly to the same book store to read his book in its entirety when he moved to the U.S. in 2009 and his funds were limited. He eventually communicated with the priest via email.

“I’m really thankful I had the privilege of communicating with him and thankful for that book,” he said. “I know his presence is with us and maybe he’s smiling and celebrating with all of us.”

Carlos Navarro, a political analyst from Mexico City who now lives in Puerto Vallarta, had a comparatively smoother journey than his fellow panelists. He also held an unshakable faith that the people are the church, not the leadership. He cited youth groups with the Missionaries of the Holy Spirit as his spiritual foundation, where service melded with scripture. 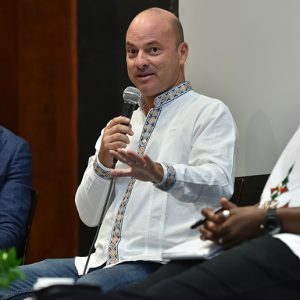 “I had a great experience with the youth groups,” he said. “When I was in college and I saw those young people do what they did and say what they said because that’s what Jesus did and said.”

Now more than 20 years into a relationship, he married his partner in 2016 when same-sex unions “were still hot off the press” of legalization by Mexico’s supreme court. He would go on to try to replicate what he saw in his youth with an LGBT group. Like early Christians, they would meet in each other’s homes, he said. They read scriptures and formed a choir. Eventually, a local priest invited them to celebrate the last Mass of every month. Without much fanfare, the group joined the parish. He said there was little mistaking the mostly-male choir was gay, but the parish was charmed.