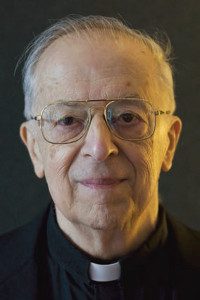 We reproduce here the obituary for the late Louis B. Pascoe, SJ, written by his former students and friends Christopher M. Bellito and Daniel Marcel La Corte in the History at Fordham blog.

Rev. Louis B. Pascoe, SJ, returned to his Father’s house on Monday, April 27, 2015, at Fordham University in the Bronx, NY, where he had spent nearly his entire career. The day was the feast of the Jesuit saint Peter Canisius—a fitting date given the reputation they both shared as gentlemen and scholars interested in reforming the church they loved.

Lou Pascoe was born in eastern Pennsylvania and planned a career as a teacher. He entered the Jesuit novitiate in Wernersville PA after graduating from the University of Scranton in 1952. He studied philosophy at Shrub Oak and then medieval history at Fordham, completing an MA thesis on Bernard of Clairvaux under Dr. Gerhart Ladner, who served as President of the American Catholic Historical Association in 1963. Fr. Pascoe spent his Jesuit regency teaching Greek and Latin at Georgetown, followed by theology studies at Louvain, Belgium, where he received his STB in 1963. Further theology studies brought him to Woodstock College, then in Maryland; he was ordained to the priesthood in 1964, followed by his theology licentiate the next year. Fr. Pascoe was then sent to study again under Dr. Ladner, now at UCLA, where he earned his doctorate in medieval history in 1970. Fr. Pascoe taught at Woodstock College, now in NY, from 1971 to 1973, the same year he professed his final vows as a Jesuit and moved to Fordham University for the rest of his long career, all the while engaged in New York City’s circle of medievalists at Columbia and NYU. He retired as Professor Emeritus at Fordham in 2001, though he continued to teach for several years and was researching until a few months before his death.

Fr. Pascoe’s scholarship is marked by the careful methodology drilled into him by Gerhart Ladner (who always addressed his student as “Father,” who in turn said he’d never even dared to think to call Ladner anything but “Doctor.”) Fr. Pascoe focused on late medieval reform, though his interests included the related topics of apocalypticism, conciliarism, theology, universities, Cistercian reform, and humanism. His first article, published while still in graduate school, appeared in the Catholic Historical Review. His dissertation was revised and published as Jean Gerson: Principles of Church Reform (Brill, 1973), followed by a series of articles on Gerson for Traditio, Viator, Annuarium Historiae Conciliorum, Dictionary of the Middle Ages, et al. He then moved on to Gerson’s own mentor, Pierre d’Ailly; Fr. Pascoe’s growing reputation brought invitations to speak at Avignon on the 600th anniversary of the start of the Great Western Schism and then throughout Europe. He served on the Executive Committee of the American Catholic Historical Association 1993-1996; a panel was held in his honor at the annual convention in 1997. Books and articles on d’Ailly followed, culminating in Church and Reform: Bishops, Theologians, and Canon Lawyers in the Thought of Pierre d’Ailly (1351-1420) (Brill, 2005).

He was a demanding and precise teacher, too. A lover of languages who did not use them lightly, Fr. Pascoe particularly made sure that his students had mastered Latin before mentoring their doctorates. Many graduate students at Fordham tell the story of holding their breath as he flipped his index cards before calling on one of them to recite their translation of texts handed out the week before. Continuing Dr. Ladner’s practice, sometimes Fr. Pascoe would stop and instruct the student to scan grammatically every word aloud, quietly sighing every now and again to say, for instance, “pluperfect subjunctive?” We are told that this gentle nudging and insight marked his Jesuit life, too. In his homily at Fr. Pascoe’s funeral, his Jesuit friend and Fordham patristics scholar Joseph Lienhard, S.J., related a classic anecdote from the dinner table. Someone was lamenting the latest news about a bit of Catholic trouble. Fr. Pascoe, in a low voice, observed, “Yes, that happened in Paris…in the thirteenth century…though worse,” before adding the reassuring comment, “but the Church survived.”

It took Fr. Pascoe over three decades to publish his second book—and therein lies an essential part of this humble scholar’s life. Once he moved along in his career, he said, it was time to put his students’ work first. Fr. Pascoe related that whenever he had to choose between his manuscript and a doctoral student’s chapter—or even an undergrad’s paper—he literally moved his pile to the side and put the student work in the center of his desk. His students and colleagues, especially in the American Cusanus Society, recognized this very fact in theirfestschrift for him, Reform and Renewal in the Middle Ages and the Renaissance (Brill, 2000), noting that his influence cannot be measured by acurriculum vitae. Scholars regularly sent him drafts of their own chapters and articles because they knew the kind of close and generous attention he would pay to their work—once again, at the expense of his own. These efforts stemmed from what he identified as the three joys of his life: his teaching, his priesthood, and his Jesuit vocation. Lou Pascoe was always a man for others—and everything he did was for the greater glory of God.