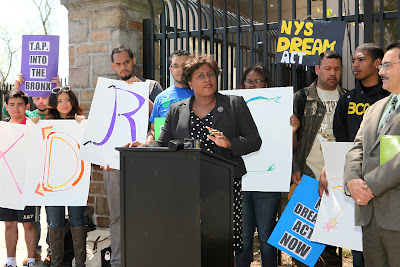 Magdalano evoked the college’s namesake, former New York State Governor Herbert Lehman, reminding listeners that Lehman was a child of immigrants who believed “the doors of opportunity should be open to all who walk through it.”

Massiah-Arthur also evoked New York history saying that she was there to speak on behalf of an institution whose founder, Archbishop John Hughes, understood that “that the new immigrant experience was the American Experience.”

It was sentiment shared by Joseph M. McShane, S.J., president of Fordham, who issued a statement which said, “We agree with State Senator Jeffrey Klein and Assembly Member Moya that access and opportunity remain the keys to future success and opportunity remain the keys to future success. The issue of immigration may in fact be the new civil rights movement of the 21st century. There can be no dispute that education for immigrants must be addressed, and addressed in a way that guarantees secure funding for the DREAM Act. ”

At the rally Massiah-Arthur acknowledged the bravery of several of the students gathered, who stood, undocumented, in front of television cameras.

“Not too many of us would have the courage to do what they are doing, which is to put a face to a problem that needs to be addressed,” she said.

She added that the DREAM Act is appropriately named because it is only though a higher education that “student on this campus, our campus, and campuses throughout the state can make this world a better place.”

Massiah-Arthur was followed by Dream Team President Janet Perez who thanked her fellow students “who have owned their status.” Perez was brought to the U.S. at six months old.

“Yes I am undocumented and yes I am unapologetic,” she said. “Does being undocumented mean that I am less worthy of being invested in?”