skip to main content
Return to Fordham University
You are at:Home»Inside Fordham»Illuminating History

When Dora Melina, UGE ’47, was going through a cabinet in her Brooklyn home some years ago, she found a glass-plate negative of a family photo taken when she was 5. But it was no ordinary portrait.

Clad in a white bonnet and a colonial-style dress, Melina is pictured with a female relative posing as Betsy Ross, stitching an American flag draped across her lap. Her dark-haired Italian mother, father, uncle, and an artist friend of theirs complete the scene. 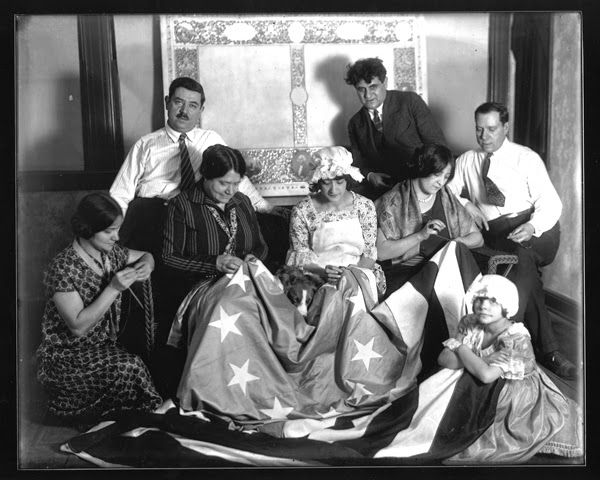 Though she doesn’t remember sitting for it, Melina said the photo was likely taken to help promote Old Glory, a large-scale illuminated manuscript created by her father and uncle nearly a century ago to commemorate the 150th anniversary of the signing of the Declaration of Independence. Melina donated the piece to Fordham in 1987, and today it hangs on the top floor of Duane Library on the Rose Hill campus.

“I’m really happy; they did a beautiful job setting it up,” said Melina, 95, who keeps a copy of the piece hanging in her den. “I wanted it to be somewhere where it’s safe,” she said, adding that the piece offers young people a glimpse of a lost art form. “They really don’t know anything about it unless we talk about it.”

Above: Dora Melina is the little girl wearing a bonnet; sitting above her is her father, Giuseppe Mungo; on the far left, seated on the floor, is her mother, Gemma Mungo; above Gemma to the right is Melina’s uncle, Antonio Mungo.
Below: Melina in her Brooklyn home, where a replica of Old Glory hangs in her den. 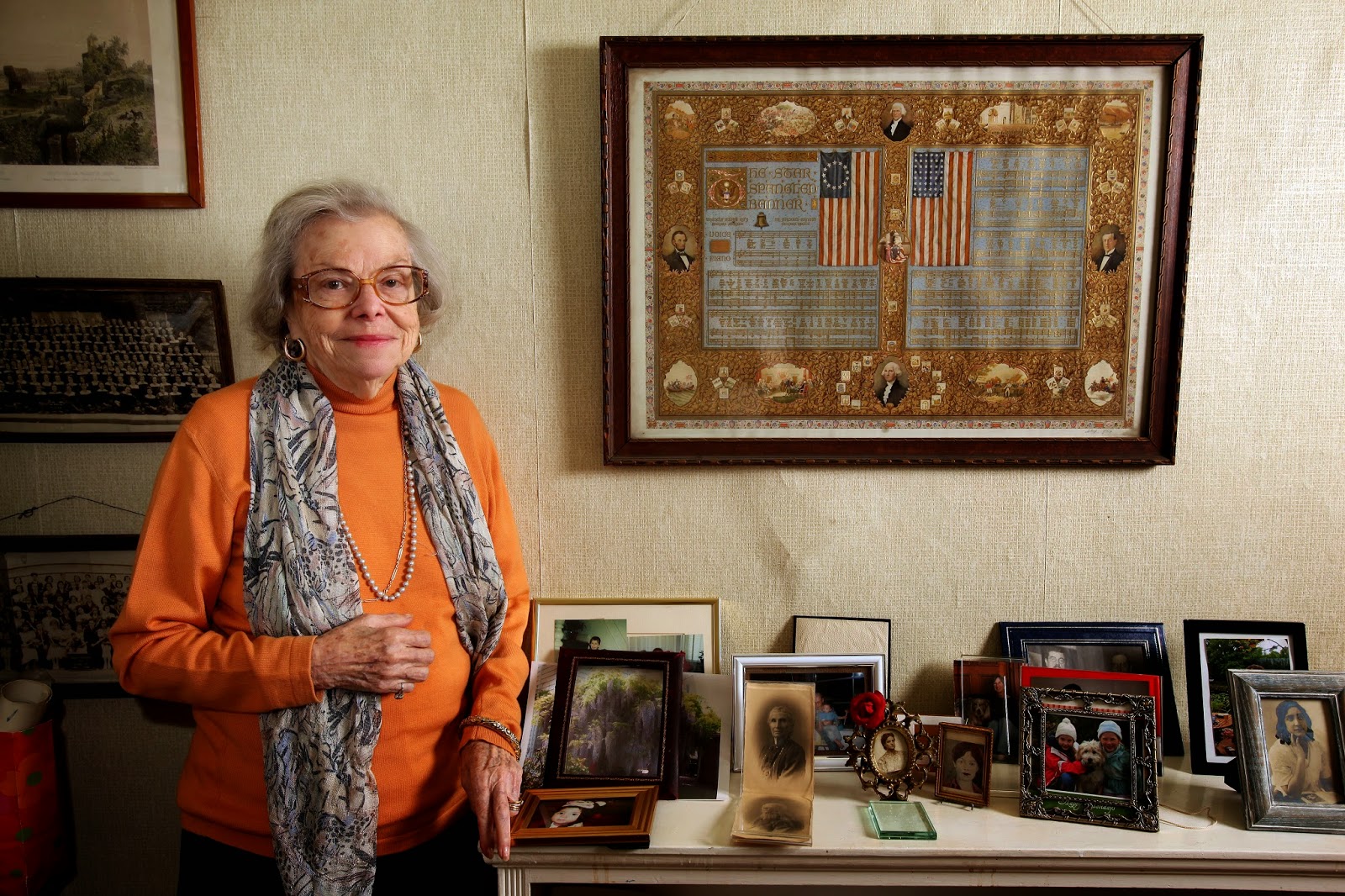 Noted artists from Italy who had recently immigrated to New York City, Antonio and Giuseppe Mungo—Melina’s uncle and father—created the work on several sheets of parchment. The music and lyrics to “The Star-Spangled Banner” are elaborately embossed in 24-carat gold in the center panels, which feature early and current (at the time) American flags. Framing the national anthem is a wide gold border, into which the brothers set several painted, miniature scenes of America’s founding, including one of Betsy Ross stitching a flag with a bonneted little girl at her side. At 43 by 63 inches, it is thought to be the largest illuminated manuscript in the world.
Completed in 1926 after 10 years of work, the Mungo brothers’ masterpiece was displayed at Philadelphia’s sesquicentennial celebration but it was never sold. The pair had created similar illuminated manuscripts—a dying craft in which text and miniature illustrations or paintings are decorated with gold or silver—for Tiffany Studios. They also did work for Ames & Rollinson, a Manhattan engrossing studio, where Melina apprenticed with her uncle after her father’s eyesight started to fail.

A Family Committed to Arts Education

An artist herself, Melina had been taking art classes at Pratt Institute, but found it “difficult to be at a drawing board all day and night.” Her husband, Fortuny Robert Melina, FCRH ’41, GSAS ’49, suggested she attend Fordham.

“I was so in love with some of the things he was learning [there],” she said. She began taking night classes at the former Undergraduate School of Education’s home on lower Broadway, near City Hall, during the 1940s and completed her degree at Rose Hill when the school moved there. She taught elementary school in Bedford-Stuyvesant and later became a guidance counselor.

“What I loved about Fordham was the scholastic philosophy,” Melina said. She enjoyed studying literature and the philosophers, especially St. Thomas Aquinas.

But she took care to note that she is not religious and did not go to church, even as a child. Her family was “anticlerical,” she said, “like most of the artists of that era.”

They were however, very devoted to the study of art. Together with other artists from Italy, the Mungo brothers founded and taught at the Leonardo da Vinci Art School, known simply as “the Leonardo.” The low-cost school opened in 1923 in the East Village, and counts among its students famed sculptor Isamu Noguchi. It later moved to 34th Street, and closed in 1942.

In 1995, Melina honored her late husband, who died in 1992, by establishing the Fortuny Robert Melina Memorial Endowed Scholarship Fund for students of high financial need majoring in the arts.
—Nicole LaRosa