skip to main content
Return to Fordham University
You are at:Home»University News»Humanitarian Assistance Graduate On Front Lines of Ukraine Refugee Crisis
Refugees arriving at the Palanca border crossing in Moldova.
Photos courtesy IOM/Nicolae Grosu
The Russian invasion of Ukraine has triggered the greatest refugee crisis on the European continent since World War II, with an estimated two million people fleeing the country, according to the United Nations.

One of the people those refugees are encountering as they cross into Moldova, a tiny neighbor to the west, is Joseph Lowry. Lowry, a native of Dublin who lives in Vienna, Austria, is a senior communications/media officer and spokesperson for the International Organization for Migration (IOM), which is overseen by the United Nations. In 2004, he earned an International Diploma in Humanitarian Assistance (IDHA) from the Institute of International Humanitarian Affairs.

Heading to the Ukraine Border

Lowry left Vienna on March 3 and arrived three days later at Moldova’s Palanca border crossing, near the Ukrainian port city of Odesa. He only had a brief chance to observe the scene there before he tested positive for COVID-19 and had to isolate in a hotel in the capital of Chișinău. But the visit still made clear the gravity of the situation.

“It so impossibly gargantuan, it’s hard to wrap your head around,” he said in a phone interview on March 8. Over 275,000 people had crossed this border at that point, he said. Some were arriving in packed S.U.V.’s; others only had that they could carry in suitcases. What was most heartbreaking was watching men say goodbye to their wives, mothers, sisters, and children.

“The men were turning around and walking back towards Ukraine with their shoulders up. Many of them were going back to fight, and they were proud, their chests were out. They were defiant, but obviously, they were heartbroken as well,” he said.

“The kids, you could see, didn’t realize what was happening, that daddy wasn’t going [into Moldova]yet, but they were. As a father, that for me was something I could identify with.”

Most of the refugees are passing through Moldova on their way to Romania and other European countries to the west, but they need a place to recharge, and in Chișinău, that has meant opening the Moldexpo, a small exhibition center that has served for the past two years as a COVID-19 treatment center. On March 8, it was housing 1,000 people, nearly double its intended capacity.

Telling the Story on the Ground 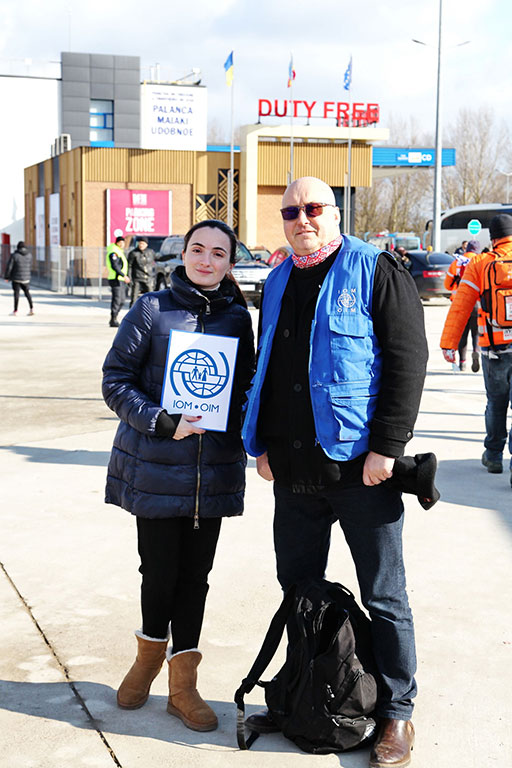 For Lowry and a small staff that traveled to Chișinău from Vienna, the job is to tell the story of not only the refugees through his Twitter account and his blog, but of the staff based in Moldova, who are supervising tasks like the procuring of scanners that can quickly read the documents of people waiting to cross the border.

In some ways, this humanitarian crisis is familiar to Lowry, who has been working in the field since 1993 and has been dispatched after natural disasters to places such as Myanmar and Somalia. At the same time, the magnitude here is much worse, he said.

Working in the media, for instance, he said he’s accustomed to a weeklong window after an emergency where the media lets them tell their story before questions about supply bottlenecks become sharper. But he doesn’t expect that now.

“My sense is that won’t happen this time because this is just unlike anything else. The media can see from where they are that it’s not going to be easy to get humanitarian aid to where it needs to get to because there’s still a war going on,” he said.

When it comes to helping, Lowry said that it’s natural that people might want to donate goods, but the answer, he said, is cash, cash, and more cash.

“We can buy in bulk locally, so we’re supporting the local market. We can get stuff across borders because we have arrangements with the border authorities. We can move things into where they’re needed,” he said.

The Most Difficult Challenge

Larry Hollingworth, the director of the IDHA, said the trainings, which have taken place for 20 years at Fordham, as well as in Africa, Asia, the Far East, and Latin America, are inexorably intertwined with day-to-day operations such as Lowry’s. While every call to action differs by the cause of the crisis, access, climate, geography, the physical and mental state of the population, and resources available, he said war is the most difficult challenge.

“Humanitarian aid workers pride themselves on a response which is neutral, impartial, and independent. We try not to take sides. In many crises, this is very hard, because there is an oppressor and an oppressed. Such is the case in Ukraine today. We have resources, we have the expertise, we have the humanitarian imperative to respond, but we have very limited access,” he said, noting this the war has quickly morphed from a regional crisis to a global one.

“There is so much more we could do if the population had egress. This is a cruel barbaric war that it is a dark stain on the Russian nation. They are deceived by the propaganda and lies of a small group of their leaders.”

Hollingworth suggested that we should prepare for the long haul, as history and experience tell us that the forced migrations of the millions of people from Ukraine will lead to protracted crises, and it may be decades before all who left return.

“We must also never forget that this is but one crisis. Its location has projected it to the front stage,” he said.

“The humanitarian community is facing huge challenges in many other parts of the world where the media coverage and the resource’s response is at best minimal.”

Lowry, meanwhile, is hoping to rejoin his team soon. He will return to Vienna for a break but will likely be back again. His second daughter was born in Kyiv, and he still has friends who live there.

“The thought of Kyiv being reduced to rubble, it’s as heart-wrenching as if it were happening to Dublin,” he said.

The Institute of International Humanitarian Affairs, which was founded in 2001, is a university-wide center that reports directly to Fordham’s Office of the President. It serves as a bridge between academia and humanitarian efforts by hosting training courses, publishing reports on a wide range of humanitarian topics, and hosting events that create an increased understanding of global humanitarian crises.