skip to main content
Return to Fordham University
You are at:Home»Colleges and Schools»Graduate School of Arts and Sciences»Humanitarian Aid Workers Extolled for Championing Human Dignity
Father McShane congratulates an IDHA graduate. Photos by Patrick Verel
In a ceremony filled with pomp, flair, and joy, Fordham sent forth “masters of compassion,” into the wide world. 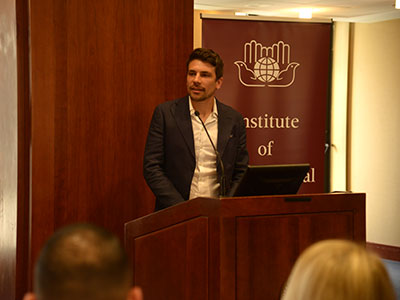 On his last day as Fordham’s vice president for administration, Thomas A. Dunne was also honored for his ongoing work with Fordham Law Schools’ Dilly Pro Bono Project, which assists immigrants seeking asylum at the southern border.

In his address, Joseph M. McShane, S.J., president of Fordham, made a point of telling graduates that he schedules his annual year-end retreat so he can attend the ceremony.

“You are built very different. You respond not so much to things and situations as to people. You champion the human dignity of those who live at the edge of human society and the shadowy places of the world,” he said.

“You should really be hailed as masters of compassion, doctors of the human form. That is who you aspire to be, and to become ever more fully, as you begin your professional careers in the field. The field is those parts of the world where human dignity is affronted, and the human heart is tested.”

The graduates hailed from 14 countries, including Sudan, Germany, Australia, and Myanmar. They followed the 53rd IDHA class, whose courses took place in Geneva in October and November.

Oscar Lindow, a native of Jordan and programme officer at the World Food Programme, delivered the IDHA student address. He marveled at the friendships that he and his fellow graduates quickly established.

“We’ve helped each other and looked after each other. As much as I appreciated some great lectures on children in armed conflict and humanitarian principles, I would also take away with me those ties that were created with people.”

Fadiya Al-Shmailawi Mahadi, a classmate and native of Iraq who works in logistics for the International Committee of the Red Cross, echoed Lindow’s thoughts.

“When you do logistics, you sit in an office, you get orders, and you have to sort them out, so you’re not really into the action. You don’t see things. But when I came here, I listened to what other people are doing, even other students,” she said.

“The stories they told, like when they had to face something in the field, like terrorism, were heartbreaking. But I’m glad I got to know these stories.”

In his farewell speech, IDHA course director Mark Little, M.D., did not sugarcoat the challenges the graduates face. According to a June 19 report from the United Nations, he noted, 70.8 million people around the world were displaced at the end of 2018.

“The numbers are staggering. When I sat in your seats in 2009, it was less than 30 million people who were displaced,” he said.

He noted that more than 800,000 cases of cholera occurred in three months in 2017 in Yemen; hospitals have been bombed in Syria; and the need for shelter, food, water, and sanitation has grown every year. This makes it even more important to remember the image of a displaced one of the first things students encountered when they were welcome to campus on June 2.

“We’ve heard that the world is losing compassion. I want you to remember the future of that child. As a child of that age, I was displaced by a natural disaster. I remember the fear of water swirling around my classroom,” he said, noting that his family moved to Australia in 1968 as a direct result of flood damage done to his home in Surrey, England.

“Standing on a desk, I remember the fear of the water rising and the policeman coming in, waist deep, and the fear in his eyes. I remember my anxiety being held in a police cell, not knowing anyone. And I remember the kindness of people who cared for me until I returned to my family.”

A Calling of the Highest Order

For reasons that are known to God alone, Father McShane said, these graduates’ hearts are attuned to the longing for creating the world spoken of in the Bible’s Book of Revelations 21:4.

“Then, I saw a new heaven and a new earth. For the first heaven and first earth had passed away. There shall be no more mourning, nor crying out, nor pain, for the former things have passed away,” he said, referencing the scripture. “My friends, this is the vision for your lives. This is the vision to which you will give yourselves to from now until the day you are dead.

“Use your gifts and your mastery of the art of compassion to bring about the realization of this sacred, noble, and divine vision. Glory in being different from others, and realize the dream of a more just society, in which every tear will be wiped away and every heart will sing.”