skip to main content
Return to Fordham University
You are at:Home»University News»Homecoming 2017 Brings Community Together from Far and Wide 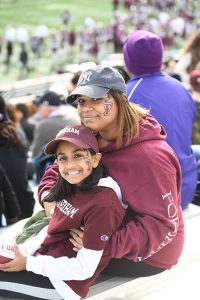 Fordham’s Homecoming celebration kicked off with the sixth annual 5K Ram Run around campus and continued on Edwards Parade, where a main tent, family tent, and a loyal donor tent were teeming with activity.

All told, more than 5,000 alumni, students, family, and friends joined the fun inside the tents and outside on the lawn in front of Keating Hall for face painting, tossing a football, and a turn inside the bouncy castles.

The shared Jesuit heritage of the College of the Holy Cross and Fordham meant there were good-natured rivalries, as many families counted among them alumni from both schools. 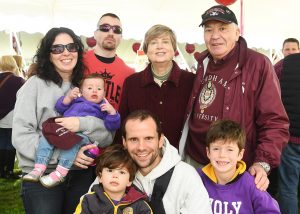 Edward Winkler, FCRH ’67, LAW, 72, was one of them. He attended last year’s historic matchup between the two schools at Yankee Stadium, and was back again this year with his daughter Alexandra Polefko, a 2003 Holy Cross graduate.

“I sent my daughter and some tuition money to Holy Cross, but most of my time, effort, and treasure goes to Fordham,” he said, laughing. “But you know, with Holy Cross being another Jesuit school, it’s like a sibling rivalry rather than a real fight.”

Megan Hughes, FCRH ’93, who was lounging on the Terrace of Presidents in front of Keating Hall, met her husband Chris, a 1990 Holy Cross graduate, in San Francisco, where they both worked for the Jesuit Volunteer Corps. For Chris, the dual connection had always been there, as one of his younger brothers also attended Holy Cross, and another attended Fordham. The couple had attended games before, but hadn’t been to homecoming in a while. They brought their eight-year-old daughter Bridget to the festivities.

“The rivalry’s fun. We can dig each other and make fun of each other,” said Megan, who fondly recalled traveling into Manhattan to attend Broadway plays during her time at Rose Hill. 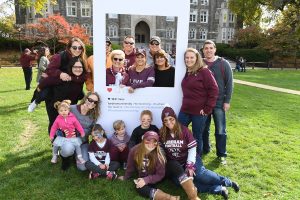 The day also drew attendees from further afield. The oversized cardboard Instagram frame in front of Keating Hall beckoned to Yue Zhang and three of her fellow classmates in the master’s in accounting program at the Gabelli School. Hailing from China’s Hubei Province, Zhang, a first-year graduate student, had never attended a homecoming or even a football game before. She was enjoying the festive atmosphere.

“Most of the time we’re just down at Lincoln Center, so it’s a fresh new experience for me to see such a beautiful campus. I met a lot of new friends here,” she said. 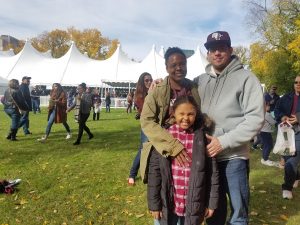 Ayanna Jones, a junior in the School of Professional and Continuing Studies, drove to the Rose Hill campus from Cypress Hills, Brooklyn with her husband Chris and their 8-year-old daughter Saniya. Jones, who was watching approvingly as Saniya scaled a pyramid-shaped climbing wall, said she rarely sets foot at Rose Hill because her classes are on the Lincoln Center campus.

“I really love attending Fordham. I love the community, I love all my teachers, and I wanted to participate in some more of the school activities,” she said.

“I’ve wanted to come to homecoming for a few years now, but in previous years I was working. This was the first weekend I was off, and I said this would be great for Saniya to see. I want her to see what I’m doing, where I go to school, and what could possibly be in her future.”