skip to main content
Return to Fordham University
You are at:Home»Campus Locations»Holiday Season Kicks Off at Lincoln Center

More than 800 members of the Fordham community gathered on Nov. 28 in the promenade of Lincoln Center’s Koch theater for the annual President’s Club Christmas reception.

The party, which was held for members of the Young Alumni President’s Club as well as alumni, parents and friends who’ve given $1,000 or more in a fiscal year, was an unofficial kickoff for the holiday season and a chance for old friends to catch up with each other and make new acquaintances.

Joseph M. McShane, S.J., president of Fordham, used the occasion to remind attendees that come December 25, the University will be celebrating its 175th Christmas, as part of its Dodransbicentennial anniversary.

“Dodransbicentennial—Say it loud, and there’s music playing. Say it soft, and it’s almost like praying. I cannot stop saying it,” he said. 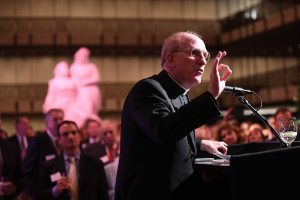 This year, there are plenty of reasons to celebrate, including

-This summer, a record 44,000 applications were submitted for the incoming freshman class.
-The class of 2020 is the most geographically diverse in the University’s history.
-Both women’s softball team and mens’ soccer team were A-10 champions this year.
-The mens’ football team is 8-3 and on November 12, the Rams defeated the Holy Cross Crusaders for their first win at Yankee Stadium since 1941.

It is also, he noted, a time to celebrate 175 years of Fordham miracles: Young men and women of extraordinary talent and great generosity of heart who come to Fordham to be transformed.

“Fordham gives a distinctive education. It teaches young men and women to read critically, to think analytically, to write with persuasion, to speak with eloquence, to set their moral compasses so that they can go forward and lead lives filled with a sense of noble purpose,” Father McShane said.

“Without you, the Fordham miracles stops. Without your generosity, lives cannot be transformed. Because of you, the sacred ministry can continue.”

In fact, he said, attendees are not just benefactors; they are “colleagues in ministry,” and practically members of the Society of Jesus, sans the SJ initials.

“When I say your names in prayer, this, my friends is when music wells up in my heart, and tears in my eyes. You are colleagues in ministry, men and women, whom Ignatius would claim as his own.”