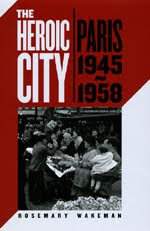 Conventional thought says that in the years immediately following the liberation of Paris from the Nazis, the city’s public spaces became sterile and dehumanized.

Rosemary Wakeman, Ph.D., professor of history at Fordham College Lincoln Center, says that’s not so, and in The Heroic City, Paris, 1945-1958 (University of Chicago Press, 2009) she makes the case that in fact, in the 1940’s and 1950’s, the streets of Paris overflowed with ritual, drama, and spectacle.

The book, which Dr. Wakeman will be signing copies of at a book signing and reception on Wednesday, April 14, features analysis from a variety of perspectives. From urban planners and architects to filmmakers and intellectuals, Dr. Wakeman brings together residents from all walks of life The result is a portrait of a flamboyant and transformative moment in the life of the City of Light.