skip to main content
Return to Fordham University
You are at:Home»Colleges and Schools»Graduate School of Social Service»GSS Panel Recognizes Rural Women Around the World 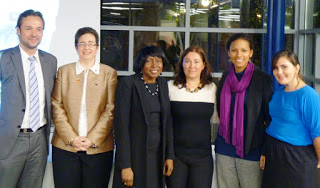 Women in rural towns and villages around the world work daily to contribute to the agricultural and economic development of their communities.

On October 15, The Institute for Women &amp; Girls at the Graduate School of Social Service (GSS) recognized these rural women during a panel presentation and discussion at the Lincoln Center campus.

“Women: Pillars of Socio-Economic Development Fabric,” which coincided with the International Day of Rural Women, featured:

The panelist’s presentations covered an array of topics, said Resch, ranging from Tropnas’s description of growing up in rural Haiti, to Mazzucelli’s explanation of the SMS data service known as Crisis Mapping, which disseminates information about unfolding humanitarian crises.

One topic spotlighted during the evening was an ongoing collaboration among several of the participants—the Clean Fuels and Cook Stoves for Haiti project. An effort to provide clean cooking fuels to rural families, the project has a particular impact on women and girls, who are responsible for collecting firewood and cooking meals, Resch said.

A video shown during the evening revealed that the current use of wood-based fuels causes numerous health, safety, and environmental problems. Long walks to collect firewood leave women and girls vulnerable to violence; inhaling fumes while cooking can lead to severe respiratory problems. According to the video, between 1.6 and 3 million children die each year from indoor pollution.

In Haiti, the use of wood-based fuels has also prompted a national deforestation crisis.

“Ninety-eight percent of the country is deforested,” Resch said. “And the fact that there are no more trees causes an increased vulnerability to landslides, flash floods, and hurricanes.”
In addition to improving the health and safety of thousands of women and girls, the production of new fuels can create economic opportunities for the local participants.The group plans to launch three pilot projects in Haiti to evaluate the energy needs of rural communities and introduce clean fuels in lieu of firewood and wood-based charcoal. These include briquettes from recycled waste (such as coconut husks) and ethanol distilled from sugar cane.

“It’s about community embedment and developing resources that are already there —bottom up instead of top down work, and local empowerment and local solutions instead of external inputs,” Resch said. “It’s about inclusion and participation… a living example of what it means to work with communities, work with women, and empower them.”

To watch the video shown at the panel, and to participate in the group’s effort to win a donation from the company Cultivate, click here.