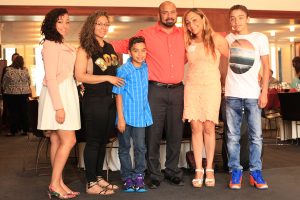 Carmen Betancourt (second from right) celebrates with her family.

Of the many commencement celebrations that took place at Fordham, one diploma ceremony was unique in that many of the students and faculty met in person for the first time.

On May 17, the Graduate School of Social Service (GSS) held a pre-commencement luncheon for the first graduating class of the Online Master in Social Work (MSW) at Fordham’s Lincoln Center campus. The program began with its first cohort in the fall of 2011 and, on May 17, graduated its first class of 39.

Milling about at the luncheon, professors and students placed familiar names to unfamiliar faces. Apparently, three years of intensive correspondence fostered some strong relationships—despite having no face-to-face interaction.

Like the traditional GSS master’s, the online master’s requires 14 to 21 hours of fieldwork with clients. Unlike an online course in, say, English literature, online MSW students connect theory with direct social work practice.

Jeff Coyle, associate director of online field instruction, was one of the few Fordham representatives that students met with in person. Coyle said that, although the classroom format was new, GSS already has a strong reputation with social service providers in the tri-state area.  This reputation helped in the development of new field placements in the communities where online students live.

Some online students were already in the profession and wanted to advance their skills, like Carmen Betancourt, who works at the Yale Child Study Center. She said that when she went to get her bachelor’s degree, the rigid schedule meant she couldn’t spend enough time with her children. 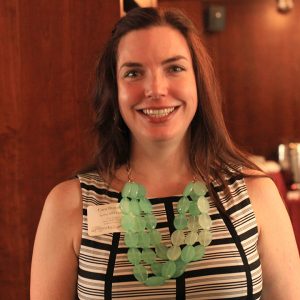 Graduate Cara Donahue praised the “fledgling program for really reaching out to us and making us feel connected.”

When she decided to pursue a master’s, she knew she couldn’t attend a traditional campus again. She had had a bad experience with online courses before and was reticent until she went to a GSS orientation.

Courses focused on the biological, psychosocial, and spiritual aspect of the client, she said. “Working with my colleagues I could see the difference from other schools. Fordham teaches you that you can learn as much from the client as they can learn from you.”

The program distinguishes itself from other programs, too, in that it is runs on an asynchronous schedule, meaning that students view the lectures each week online on their own time schedules.

According to Debra McPhee, PhD, dean of GSS, the success of the online program depended on building solid connections between faculty and students.

“Professors have to engage differently and committedly with each individual student,” she said. “In some ways the faculty end up knowing their students in a much more intimate way and in a much more specific way than they might in a traditional classroom. There, a student can sit in the back, do their work, and answers one or two questions. That can’t happen online.”

“From the very first day, you’re communicating with your fellow students and faculty,” he said. “And that continues for the next three years.”

Later in the day, the online students joined the rest of the GSS graduates at commencement ceremony held at Avery Fisher Hall. Online master’s student Raquel Berrios-Webbe, in fact, gave the keynote speech on behalf of all the graduating class.

She said she was surprised that an online student had been asked to speak on behalf of all GSS students, but soon saw the wisdom in it.

“The call to an education in social work is not defined or constricted to the venue of education we choose, but rather by an unyielding commitment to a profession that is grounded in the well-being of others and the pursuit of social justice,” she said.