skip to main content
Return to Fordham University
You are at:Home»University News»Government Relations Keeps It Local at Amsterdam Houses
Lesley Massiah-Arthur, at right, meets with community leaders from Amsterdam Houses and Amsterdam Addition, from left, Vice President of the Resident Association for Amsterdam Houses Yvette Powell, activist Harold Thomas, and Patricia Ryan.
On a rainy day in September, Lesley Massiah-Arthur, associate vice president of the Office of Government Relations and Urban Affairs and special assistant to the president, made her way from a meeting at Fordham’s Lincoln Center campus to the Amsterdam Houses at the Goddard Lincoln Square Neighborhood Center, located across the street from campus. 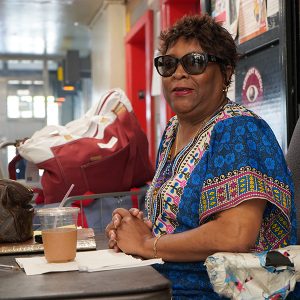 As she waited for other community members to arrive, she caught up with an old friend, Pat Ryan. Ryan is a long-time resident who has served as president of the Resident Association for Amsterdam Addition. Though she stepped down some time ago, many residents see her as the “mayor” and go to her with a range of issues.

The two were meeting with other community leaders because Massiah-Arthur was unable to attend the 75th-anniversary celebration of the Amsterdam Community Collective this past summer. She wanted to congratulate them and simply touch base. The celebration was a standout among the many efforts the community sponsors and Fordham supports.

As Massiah-Arthur helped Ryan decipher the winnings from her lottery scratch-off tickets, the two reminisced about the time Ryan testified before the City Planning Commission in support of a new law school and residence hall at the Lincoln Center campus. She was one of many in the community that stepped up to help Fordham at that meeting.

“I said a lot that day,” Ryan said, recalling her key testimony before the commission in 2009.

All Politics Are Local

When people think of the Office of Government Relations and Urban Affairs, and Massiah-Arthur’s work in particular, they often conjure an image of her working the halls of the State Capitol or City Hall to secure state funds for the new McShane Student Center arcade or teaming with city agencies to secure funding for the Mentoring Latinas program and the Bronx African-American History Project. But all politics are local, and the locals have a long memory, said Massiah-Arthur.

She added that without the support of Ryan, the development of the Law School building and McKeon Hall would have had a much harder time getting past the City Planning Commission. At the time, Ryan told the community-focused Commissioner Amanda Burden that seeing a university on their block would be a source of inspiration for young people who live there.

This wasn’t the way that Massiah-Arthur was told it would play out. Naysayers warned her that she wouldn’t be able to get community support from the housing projects.

“That was a lie. This has been the easiest relationship I’ve ever had,” said Massiah-Arthur, who credited not only the work of her office, but also that of students volunteers from Fordham Football and the men’s basketball team, the CSTEP Program, the Center for Community Engaged Learning, and the Graduate School of Social Service for fostering and maintaining good will over the years. From handing out back-to-school backpacks to providing funds for turkey giveaways at Thanksgiving and participating in the annual Family Day, Massiah-Arthur said that Fordham students, faculty, and staff have helped whenever they could.

GSS Alumni, faculty, and staff worked with residents to create a survey to assess needs.

Sometimes requests, like one for a  generator after a storm knocked out the lights, could not be met for insurance reasons. But Massiah-Arthur said the University did accommodate residents’ request for security cameras. They had been promised by elected officials but were never delivered. Fordham had them installed, which in turn prompted legislators to provide funds for additional cameras.

Ryan agreed that the relationship with Fordham has been strong over the years, and credited the University’s continued support, such as donations to a fund that the collective taps into to award scholarships. Massiah-Arthur’s honesty plays a part as well, she said.

“That’s because Lesley is the truth. Okay? Because she’s a lady of her word,” said Ryan. “And when she says something, it happens. If she could do it, she does it. If she can’t, then she can’t.”

But the relationship isn’t just about trading favors. Sometimes it’s just about listening, said Massiah-Arthur. In time, Massiah-Arthur came to realize that others in power needed to listen to the residents too.  So she arranged a meeting between the University and the general manager of the New York City Housing Authority (NYCHA) and brought the residents with her to discuss all the items on their to-do list.

“They were people who by definition should not have been able to have gotten a meeting, but needed a meeting,” said Massiah-Arthur.

The bait-and-switch meeting got results; residents got extra dumpsters, the generator, and other needs met. The important thing for Massiah-Arthur was that the residents spoke for themselves.

“They could pull it together on their own. For me, it was important to do it because when I saw the men and women who walked into that room, they reminded me of my great aunts, they reminded me of my grandmother,” said Massiah-Arthur. “These are women who didn’t need anybody to speak for them. If you just ask them what they wanted, they’ll tell you.”

During the pandemic, the government relations office provided PPE equipment over the Thanksgiving holiday.