Coming off an extraordinarily busy year, Leon assumes his new position after winning the 2014 Tony Award for directing Washington in A Raisin in the Sun. A month later his groundbreaking Holler if Ya Hear Me, a musical featuring the lyrics of the late rapper Tupac Shakur, opened on Broadway. By summer’s end, he was acting opposite Phylicia Rashad in Same Time Next Year in Atlanta.

Rashad, an accomplished actress, was the first to hold the chair in 2011 and Leon is the first director named to the chair.

“I consider myself as a director, but I started out as an actor,” said Leon. “Every two or three years I act to remind myself about the process and what actors are going through.”

In Leon, students will have someone who can teach every aspect of the craft—and then some.

“I give life lessons and, at the same time, I give truth lessons about the stage,” he said.

In addition to serving 12 years as artistic director of Atlanta’s Alliance Theatre Company, Leon is the founder of the True Colors Theater Company, also in Atlanta. He has directed opera, television, and eight Broadway plays.

“What I love about directing is you get to work with every element of the production,” he said. “You have to have faith and trust in the choreographer, the music director, the actors, and the crew.”

Leon said he seeks out universal themes that transcend background or class. As an example, he pointed out the parallels between the plays of August Wilson and the lyrics of Tupac Shakur.

“Pac is the same as August, they’re just writing about different life experiences in different cities,” he said. “Doesn’t everybody love their mother? Doesn’t everybody want to buy their mother a pearl necklace? In many ways Holler if You Hear Me could be A Raisin in the Sun 50 years from now. They’re all just really about access to the American Dream.”

And while Leon said he’s unfamiliar with the Jesuit traditions, a prominent theme of social justice threads its way through much of his work. 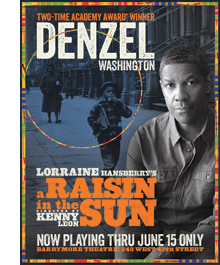 Leon praised his new chair’s benefactor, Denzel Washington, FCLC ’77, with whom he shares a special bond: Besides starring in Leon’s Tony-winning production of A Raisin in the Sun, he also directed Washington in August Wilson’s Fences—for which Washington earned a best actor Tony. Calling Washington a “true theater beast” and an “American treasure,” the director said that Washington built the foundation of his career “centered on the world of theater.”

“Theater allows him to expand what he does in his film work, and that’s why he wants to come back to the stage every three or four years,” said Leon. “That’s the true litmus test: Not every film actor can do theater, but most of your great theater artists can do film.”

Although Leon does not consider himself to be a traditional teacher, he said that the chance to join the faculty at Fordham couldn’t have come at a better time, as he has been looking for opportunities to give back.

“I’m also really looking forward to what I’m going to get from the students,” he said. “I want to see what’s in their heads, what energizes them, what’s going to be the next story on Broadway. They’re going to tell me a lot.”

He said he hopes students will benefit from his own experience, and “not have to repeat the same mistakes.” Students, he said, could expect to learn how to break down, build, and maintain a character and “how you stand in truth.”

“It’ll be probably the rawest class they’ve ever had,” he said.

Leon’s experience with the young cast of Holler transformed rehearsals into something of a collaborative master class, with rappers, dancers, actors, and poets learning from each other, he said.

“You find the truth by working with the person you are opposite. I love that.”

And Leon himself has learned from the masters. He worked with August Wilson when the playwright wrote Radio Golf, the last play of The Pittsburgh Cycle, Wilson’s series of 10 plays depicting 10 decades of the African-American experience. For the show’s Broadway production, Leon asked Afeni Shakur, Tupac’s mother, if he could use the rapper’s song “Me Against the World” for the show’s final scene.

“As an African-American artist, I’ll never forget the time I spent with August [Wilson] and to have seen the fulfillment of his completing the cycle of plays,” Leon said. “Then, to have reached out to Afeni Shakur and to be doing a show using Tupac’s words . . . you just look at Tupac’s words and realize he was in the same army as August Wilson, Lorraine Hansberry, and Shakespeare.”

Another life lesson Leon has to share is that talent can only take artists so far, he said. The rest is work. He noted that Washington often puts in 16-hour days.