skip to main content
Return to Fordham University
You are at:Home»Editor's Picks»Giving Back: The Cunniffes Make $20 Million Gift to Fordham

The stately administration building in the heart of the Rose Hill campus already bears the name Cunniffe House, thanks to the generosity and service of Maurice J. (Mo) Cunniffe, FCRH ’54, and Carolyn Dursi Cunniffe, Ph.D., GSAS ’71.

This month, the Cunniffes have taken their philanthropy to an even higher level, with a transformative $20 million gift that will be devoted to funding student financial aid.

The newly titled Maurice and Carolyn Cunniffe Presidential Scholars Program will encompass one of the largest merit scholarships available to Fordham students, and will pave the way for a new generation of women and men to receive a comprehensive Jesuit education.

Presidential scholars are generally ranked in the top 1–2 percent in their high school class, excel in academics and extracurricular activities, and exhibit leadership in their academic and personal lives.

With the new funding, the program will challenge the scholars and enrich their undergraduate experience through partnerships among key academic units across the University, including undergraduate dean’s offices and the Office of Prestigious Fellowships. The gift will also support summer programs focusing on service learning, experiential learning through international immersion, professional internships, research opportunities, and close mentoring by faculty.

Joseph M. McShane, S.J., president of Fordham, called the gift—the second largest in the University’s history—a monumental display of generosity, one that puts Fordham’s current campaign for financial aid at $82 million towards a $175 million goal. 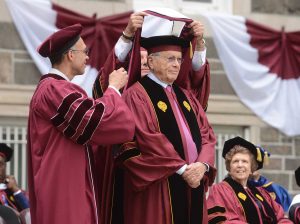 Cunniffe recieved an honorary degree at Fordham’s 171st Commencement ceremony on May 21, 2016.
Photo by Chris Taggart

“We renamed the administration building Cunniffe House to acknowledge Mo and Carolyn’s great generosity and service to Fordham, as well as their integrity and steadfastness,” Father McShane said. “Having known Mo for more than two decades, I can say with authority that his accomplishments and humility are unparalleled. It is very much Fordham’s honor to have their names associated with our most prestigious scholars.”

Mo Cunniffe has been a part of the Fordham family for almost seven decades. A child of Irish immigrants in the Bronx, he lived within walking distance of the Fordham Rose Hill campus. He graduated from Fordham Preparatory School in 1950 and enrolled in the University, where he earned a degree in physics. After graduating, he went on to become a successful engineer, businessman, and entrepreneur. He served on Fordham Prep’s board of trustees from 1983-1995 and the University’s board of trustees from 1995-2003.

Carolyn Cunniffe received her bachelor’s degree from Fordham College at Rose Hill, and her master’s and doctoral degrees from the Graduate School of Arts and Sciences. She was a vice president at Revlon and Chanel before joining Cablevision systems, where she was a senior vice president. She currently serves on the board of the Convent of the Sacred Heart, Greenwich, and Fordham’s Board of Trustees.

In 2010, Mo Cunniffe received the Fordham Founder’s Award, recognizing the ways in which his life reflects the University’s defining traditions, and at Fordham’s 171st Commencement ceremony in May, the University bestowed upon him an honorary Doctor of Humane Letters, for his role as one of the University community’s most vital and longstanding supporters.

He said that his latest gift not only recognizes and supports the place that has been like a home for nearly his entire life, but also makes it possible for more generations to follow in his steps.

“We believe in Fordham and its mission,” Mo Cunniffe said. “Fordham has educated people of all social strata, including immigrants and students without funds. It makes all kinds of sense to us to continue to support this mission, which is also in the interest of society.”

Roger A. Milici Jr., vice president for development and University relations at Fordham, called the gift a bold investment in humanity and in the promise that future Cunniffe Presidential Scholars offer our global society, their families and their workplaces. He noted that with cumulative giving approaching $35 million, the Cunniffes are setting the pace for philanthropy at Fordham.